DISCLAIMER: This review does contain spoilers for the Star Wars movies. Proceed with caution of you are one of the two or three people that has not seen them yet. 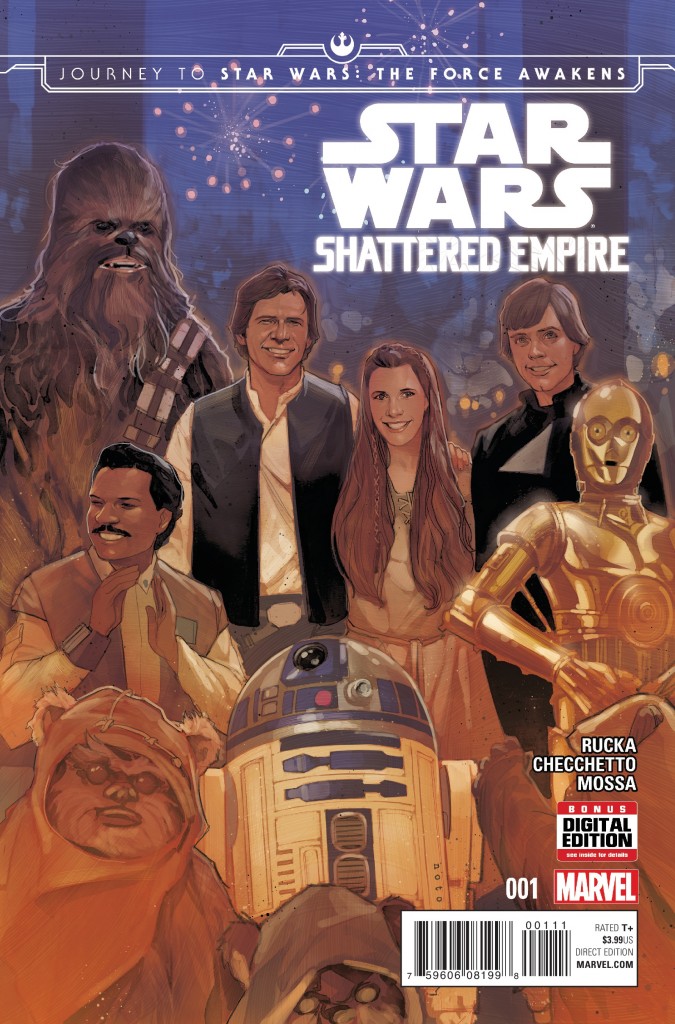 Star Wars Shattered Empire is the latest in Marvel's Star Wars comic line, and the first post-Return of the Jedi comic set in the new canon.

We are less than four months away from the theatrical release of Star Wars Episode VII – The Force Awakens. In a red letter year for blockbusters that has already seen its share of phenomenal titles on the big screen and will continue to from here on out, the new Star Wars movie fans never thought they would see is easily at the top of the “most anticipated” list for a number of fans.

Marvel’s Star Wars comics need no introduction; they have been on top of things since the beginning of 2015, releasing no shortage of excellent titles, reintroducing people to these classic characters, locales, and worlds, in new stories that are canon to the official universe, set between the movies in different time frames.

September has seen the launch of Journey to the Force Awakens, a series of multiple book and comic releases leading up to the December release of the new theatrical movie. The latest Star Wars comic series from Marvel, Shattered Empire, is noteworthy for being a part of this multimedia project, and also the first comic in the new canon from Marvel to be set AFTER Return of the Jedi. Because of this, there is no doubt in saying that it is the most hotly anticipated of all of Marvel’s new comic stories.

The first volume of Shattered Empire picks up where Episode VI – Return of the Jedi leaves off. The Rebels have won at the Battle of Endor. Darth Vader and Emperor Palpatine are dead. The Empire is in ruins and the surviving Imperials are on the run after the triumph of the Rebel Alliance. Following their victory, many of the Rebels return to the Forest Moon of Endor to celebrate in an Ewok village, relaxing and pondering the future. A female Rebel pilot and her lover contemplate the future to come in a post-Galactic Empire galaxy. Following a night of celebration, Han Solo informs the victorious Rebels of an Imperial holdout on the other side of the Forest Moon. Accompanying a detachment of Rebels to eliminate the surviving Imperials, the Rebellion's heroes discover that the war might not be over just yet…. 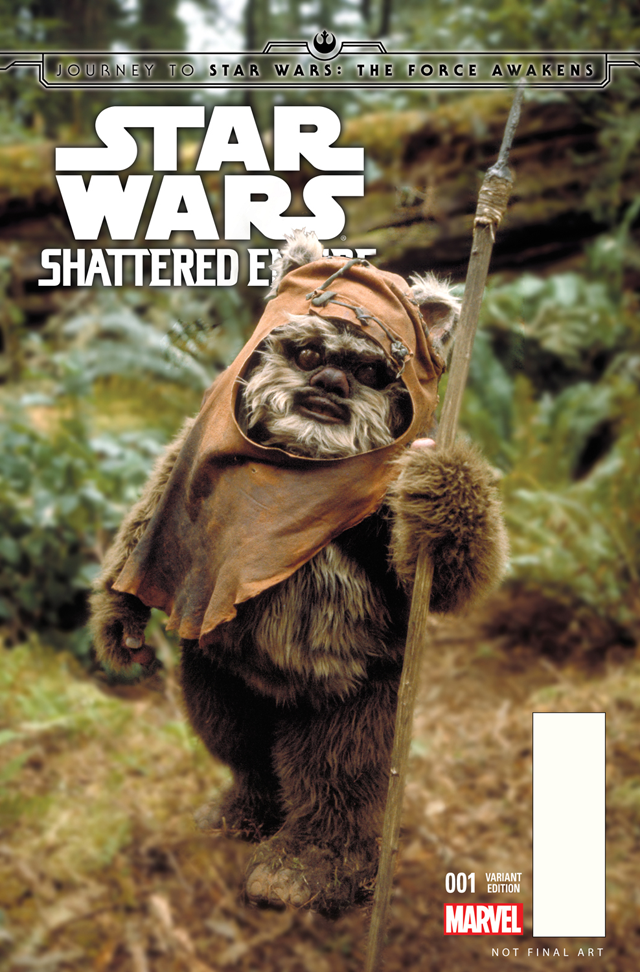 As with most of Marvel's Star Wars comics, this one is being printed with a number of "Variant" covers, including this one featuring Wicket the Ewok.

Marvel continues to release their share of solid Star Wars stories, and the first issue of Shattered Empire (which is going to be a four part series) is another terrific tale set in everyone’s favorite Galaxy Far Far Away. It is essentially just the tip of the iceberg for the post-Return of the Jedi stories, but does a good enough job building anticipation for future comics and, perhaps more importantly, the new film to come in December.

The first big surprise with this issue is that it actually kicks off with the end of the Battle of Endor still in progress! This gives an action-packed finale to the Galactic Civil War, but also serves as the beginning to something new and interesting in the Star Wars mythos as well. We get some great artwork and scenes depicting the final moments of this battle, and even a few instances that help to put new perspective on our heroes’ involvement in said battle.

Of course, fans who have seen Return of the Jedi will immediately recognize the celebration in the Ewok village that concluded the film, and get to see it through other eyes as well. The comic focuses primarily on the female A-Wing pilot and her lover; someone who reads the comic and has been reading information regarding Episode VII’s release is going to see a connection between them and a character slated to appear in the forthcoming movie (I am trying to keep this spoiler free so I will say no more).

Like other Marvel Star Wars comics, this one ends with a major (and likely intentionally vague) cliffhanger that leaves the door wide open for the second installment. In this post-Return of the Jedi tale, I was all the more intrigued and my anticipation for the next story now is likely higher than it has been for any other Marvel Star Wars story of recent memory. Perhaps that is because we are finally beginning to see the canon aftermath of what happens following the Empire’s defeat, which may not be as permanent as we once thought.

We have finally arrived at a point where Star Wars comics are going BEYOND the Classic Trilogy and Return of the Jedi’s conclusion. Shattered Empire’s first installment has this fan all the more enthusiastic about what is to come in the future. If you are at all a Star Wars fan and you are ready to dive into a post-Return of the Jedi Star Wars galaxy, now is the time to begin doing so. Highly recommended! 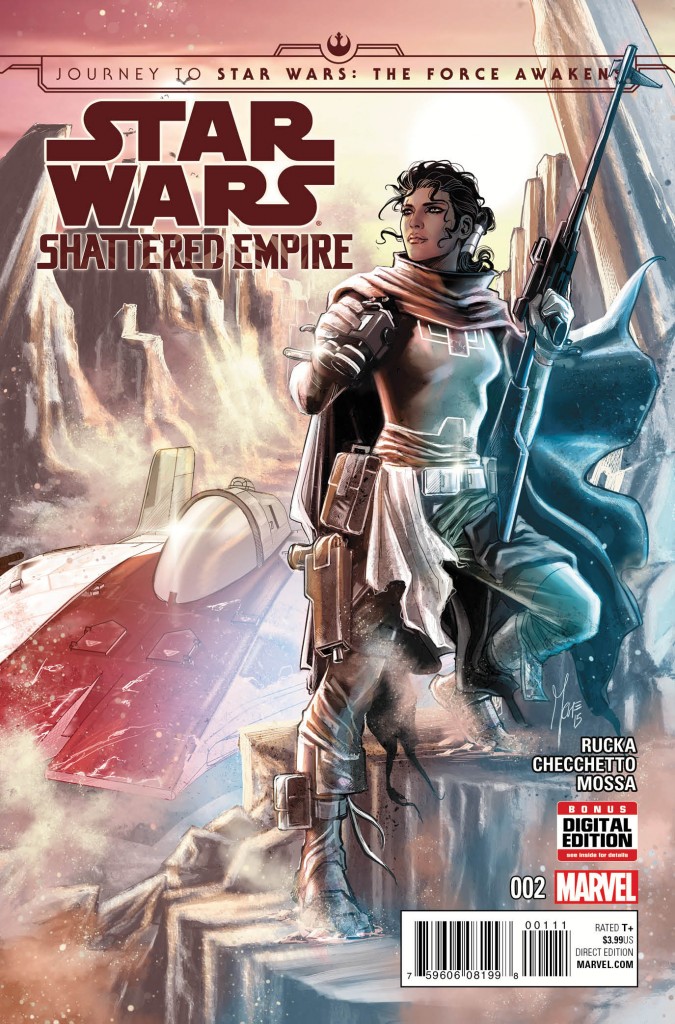 The second installment of Shattered Empire will be released in the near future. It is slated to run for four issues total.