From 1999-2005, George Lucas revisited Star Wars at long last in the form of the Prequel Trilogy, comprised of Episode I: The Phantom Menace, Episode II: Attack of the Clones, and Episode III: Revenge of the Sith, showing the transition of the Star Wars universe leading up to the Classic Trilogy. The Prequel Trilogy was met with a mixed critical reception, but still has enough redeeming qualities to merit viewing.

Starting in 2003, we got one of the more interesting Star Wars Expanded Universe projects in the form of Clone Wars, a series of animated segments bridging the gap in time between the second and third prequels. Leading this project was Genndy Tartakovsky, well known for his creations Dexter’s Laboratory and Samurai Jack, and in more recent years, the Hotel Transylvania films. This series is not to be confused with the better-known CGI animated series The Clone Wars, which aired on Cartoon Network starting in 2008 (however it is worth noting that the two series do share some common voice actors, and the animators of the 2008 series did look to the Tartakovsky series when designed character models and the like). 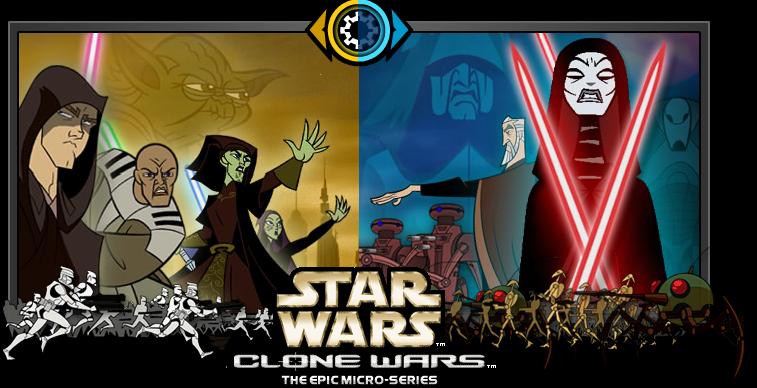 Essentially, the Clone Wars aired on Cartoon Network from 2003-2005, bridging the gap between Episode II and Episode III, showing what happened around the Star Wars universe in the midst of the eponymous war raging during this time. The Jedi Knights have become generals to the Clone Army, and have taken to various worlds around the galaxy to combat the Separatist Army, commanded by former Jedi Knight turned Sith Lord Count Dooku. Heroes like Anakin Skywalker, Obi-Wan Kenobi, Kit Fisto, Mace Windu, and Yoda combat the Separatist’s droids and assassins on various worlds and in space, with both sides winning their share of battles. Skywalker is promoted from Padawan to Jedi Knight, but the warriors of the Republic quickly find themselves facing the deadliest threat they have encountered yet in the war – General Grievous.

For what it is, this series is surprisingly good. The emphasis here is almost entirely on action, for better or for worse (likely good news for people who got tired of the lovey-dovey crap with a terrible script in the prequels). Tartakovsky’s art style takes some getting used to, but this fan grew to love it by the time the series was done with. The voice cast is mostly comprised of veteran voice actors rather than the film actors, although the always reliable Anthony Daniels does return to voice C-3PO. Some of the character designs and a few of the animation elements are a little over the top, but you can tell Tartakovsky and company wanted to go all out and do a lot of the things they would never be able to do convincingly in a live action film.

One of the most interesting aspects of this series is that it introduces two characters who would become fan favorites. The first of these is Asajj Ventress, the Dathomirian Nightsister, who would appear in countless Expanded Universe stories, novels, and most prominently in the later 2008 The Clone Wars series. Sadly, she is wasted here, and is not seen or heard from again after an epic battle with one of our heroes. The second, of course, is General Grievous, the multi-limbed cyborg wielding multiple lightsabers from the Jedi Knights he has killed in the past; he is much more powerful and threatening here than he was in Revenge of the Sith, but lacks the signature Matthew Wood voice that so many people have come to associate with the character (Wood also voiced the character in the 2008 CGI series as well). It is interesting to see the earliest incarnations of these two characters, even if the 2008 series did more with them.

The fast pace of the series prevents the viewer from getting bored. As was previously stated, this is mostly an action-oriented series, although it does feature some attempts at character development, including Anakin Skywalker becoming a full-fledged Jedi Knight, and some hints as to his post Revenge of the Sith future, which Star Wars fans know all too well. There are a few too many scenes/scenarios/subplots/etc., but there are definitely more hits than misses despite it all.

The series was released on two DVD volumes in 2005, though these have long since been out of print. Most likely, however, they can still be found for a decent price on used DVD websites. Furthermore, viewing online is an option as well. This series is no longer canon as per the Lucasfilm Story Group following Disney acquiring Lucasfilm and Star Wars, but that does not mean it should be overlooked or forgotten.

Clone Wars is an interesting Star Wars project that tends to be overlooked these days and overshadowed in terms of the 2008 series covering the same time frame. Still, this is a worthy viewing for anyone that considers themselves a Star Wars fan; the unique art style and emphasis on action actually make this series better than much of what you will see on the screen in the Prequel Trilogy films. No fan of the Galaxy Far, Far Away should overlook this one!