Home›Features›White Spirit - The First and Only Album from one of the NWOBHM's Most Underrated Bands!

White Spirit - The First and Only Album from one of the NWOBHM's Most Underrated Bands! 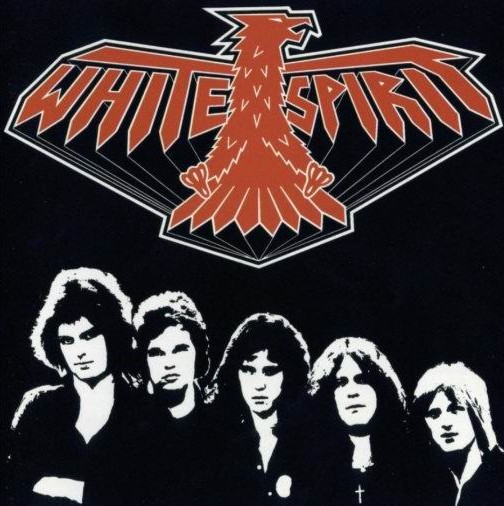 White Spirit is the self-titled debut and only album from the band of the same name.

In 1980, the New Wave of British Heavy Metal was in full swing, with countless bands drawing the attention of headbangers, critics, and record companies alike. White Spirit, hailing from Hartlepool, was no exception to this. The quintet had a sound unique from many of their competing bands, and enjoyed some recognition, but it was short lived. The band only recorded one album and a few singles and compilation appearances before disbanding. It is a shame that this band of some of the NWOBHM’s top players could not catapult themselves to greater successes; they certainly deserved more credit than they got.

The lineup that recorded the band’s album consisted of vocalist Bruce Ruff, guitarist Janick Gers, bassist Phil Brady, drummer Graeme “Crash” Crallan, and keyboardist Malcolm Pearson. Of these musicians, Gers later achieved the widest mainstream success as he would become a member of Iron Maiden in 1990, where he has been ever since. He also served a brief stint in Ian Gillan’s solo band, Gillan, following his time in White Spirit. Crallan, for a short time, played with fellow NWOBHM rockers Tank. After vocalist Bruce Ruff left the band, they briefly featured singer Brian Howe, later known for his roles in Ted Nugent’s band and the late 80s/early 90s incarnation of Bad Company. 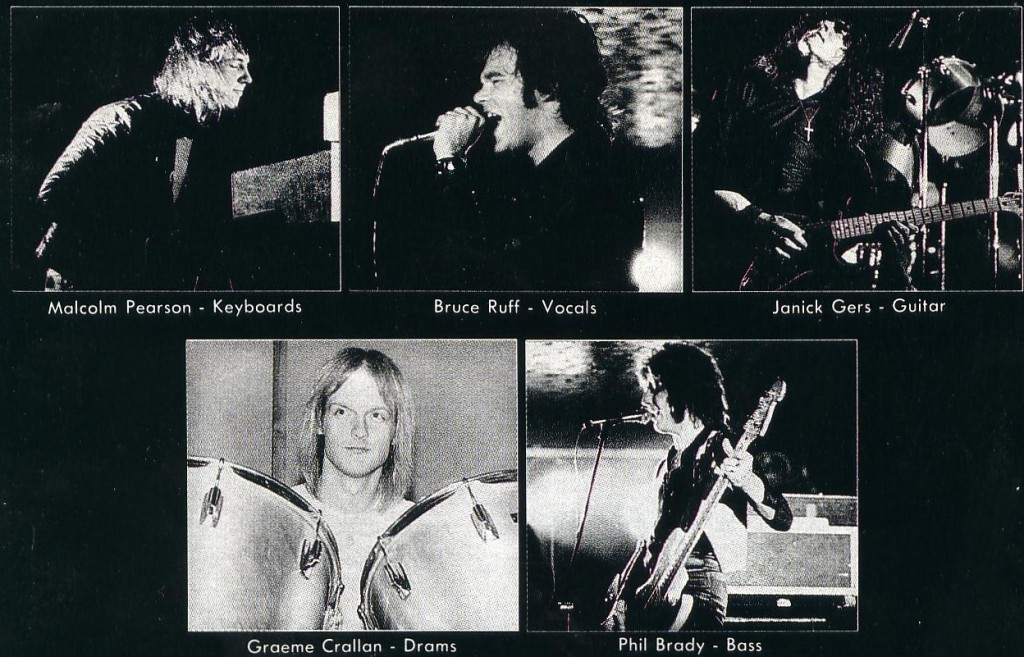 Photos of the band members.

While clearly influenced by the classic hard rock bands of the 70s (they have drawn a lot of Deep Purple comparisons), White Spirit had a sound all their own that definitely helped them to stand out amongst their musical peers. What really helped the band to stand head and shoulders above the competition was the way that they integrated keyboards into their music. Yes, numerous metal bands did this when they were taking on a more commercial or progressive sound, yet for these guys it came naturally and just seemed like part of the music, not a gimmick or anything of the sort. Of course, there is the question that is on everyone’s mind, though. Is the music any good?

This 1980 album is a lost classic, and the product definitely stands the test of time, perhaps even more so than some of the band’s better known peers. While some tracks on the album are certainly better than others, there are not any moments I would consider to be “weak” either. All of the musicians are competent, superb performers; it is a shame that outside of Gers, none of these guys were known outside of the group. The true standout talent in the band is keyboardist Pearson; he is able to achieve an unrealistically diverse number of keyboard sounds in the album’s relatively short duration. From lighthearted pop sounds to aggressive playing that rivals even the guitars, he was someone who should have gone on to greater things following an all too brief moment in the British metal spotlight. 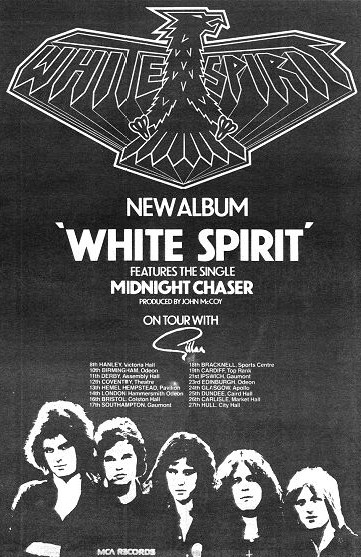 Rare promo ad for the band's album release, and a tour with Gillan.

Though the original LP is only seven tracks long, the band does succeed in delivering a superb hard rock album with a sound all their own. What the band managed to do here, no other band at the time was doing, making it all the more appealing a listen for any fan of the NWOBHM. Opening cut “Midnight Chaser” kicks things off well with a solid hard rock sound, complete with a brief but memorable keyboard solo! “Red Skies” continues the hard rock assault, with the keyboards playing an even more substantial role, particularly in the song’s latter half. The band achieves a nice mix of heavy and melodic on this cut. “High Upon High” is lighthearted and melodic compared to much of what else is found on the record, yet I would not quite call it “poppy” either. Side one ends with “Way of the Kings,” the album’s hardest and heaviest track, and arguably its finest, featuring a killer interlude that contains some of Pearson’s wildest keyboard work.

The album, admittedly, gets off to a bit of a slow start on its second side. “No Reprieve” and “Don’t Be Fooled” are good songs, though admittedly not the highlights of the album either. Both tracks still manage to impress though. The real showcase of side two is the lengthy epic “Fool for Gods,” which ends the album in fantastic form with its sheer length and diverse sounds explored throughout its duration. If you want to close an album out in epic fashion, you simply cannot do a whole lot better than this. Overall the album is solid with no weak moments, and fans of the NWOBHM are going to enjoy what they hear here. 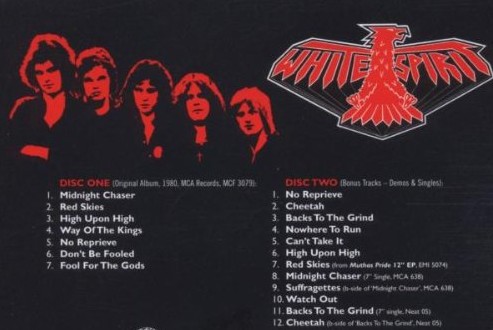 In 2005, the album was reissued with an entire second disc worth of bonus material, including B-Sides, singles, demos, session takes, compilation tracks and more. For the die-hard fan, this is must-hear material, including alternate versions of cuts from the record, and rare songs you will not hear anywhere else. “Nowhere to Run” and “Can’t Take It” easily rival the tracks on the actual album, and it is something of a shame that they never made the final cut. “Watch Out” (itself a rearrangement of “Nowhere to Run” with different vocals) was the only song the band ever recorded with Brian Howe, which is essential listing for those who grew to love his vocals with Bad Company and Ted Nugent. Sadly, this edition of the album was not in print for very long and is very difficult to track down. However, it is worth getting if you can find it!

It can be tough to get your hands on White Spirit’s debut; this fan is not even sure if any versions of it are still in print. That should not deter you from listening to what is offered here, though. Anyone who gives this release a listen will be pleasantly surprised; the NWOBHM had many bands that were wrongfully neglected, this being one of the major ones. Find out why these guys should have been bigger than they were. VERY highly recommended if you are a fan of classic hard rock/metal.

Autograph - "Every Generation" is the latest ...

Roger Waters The Wall - The Legendary ...