Home›Features›UFO - The Releases from the pre-Michael Schenker Years Time Forgot!

UFO - The Releases from the pre-Michael Schenker Years Time Forgot! 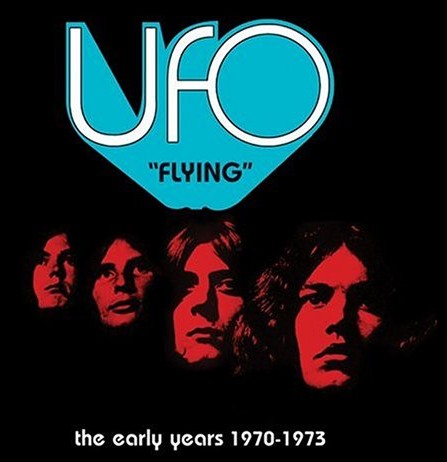 In the 70s, UFO became known as one of the top hard rock bands of the era, in a heyday that included the legendary Michael Schenker on guitar. Even the era beyond Schenker achieved some modest popularity. These criminally underrated hard rockers remain the favorite of many a rock and roll fan even if their “classic” period is long since over; a version of the band comprising 3/5 of the classic lineup still tours and records to this day.

Many believe that UFO began with Michael Schenker on guitar, but the group, originally known as Hocus Pocus, actually has a history that stretches back several years prior. In fact, the band recorded and releases two studio albums and one live album prior to Schenker ever even joining the band! The earliest releases from the band included guitarist Mick Bolton, and the familiar players; vocalist Phil Mogg, bassist Pete Way, and drummer Andy Parker.

Much has been spoken about the band’s classic Schenker years; you can hear personalities like Eddie Trunk constantly praising this era of the band and all that came along with it; the band achieved their best sound when they were trying their hand at the classic hard rock we know and love them for, though even then they were not afraid to experiment musically here and there. What did UFO sound like before Schenker joined up with them? And is this an era of the band that fans are going to want to go back and explore? 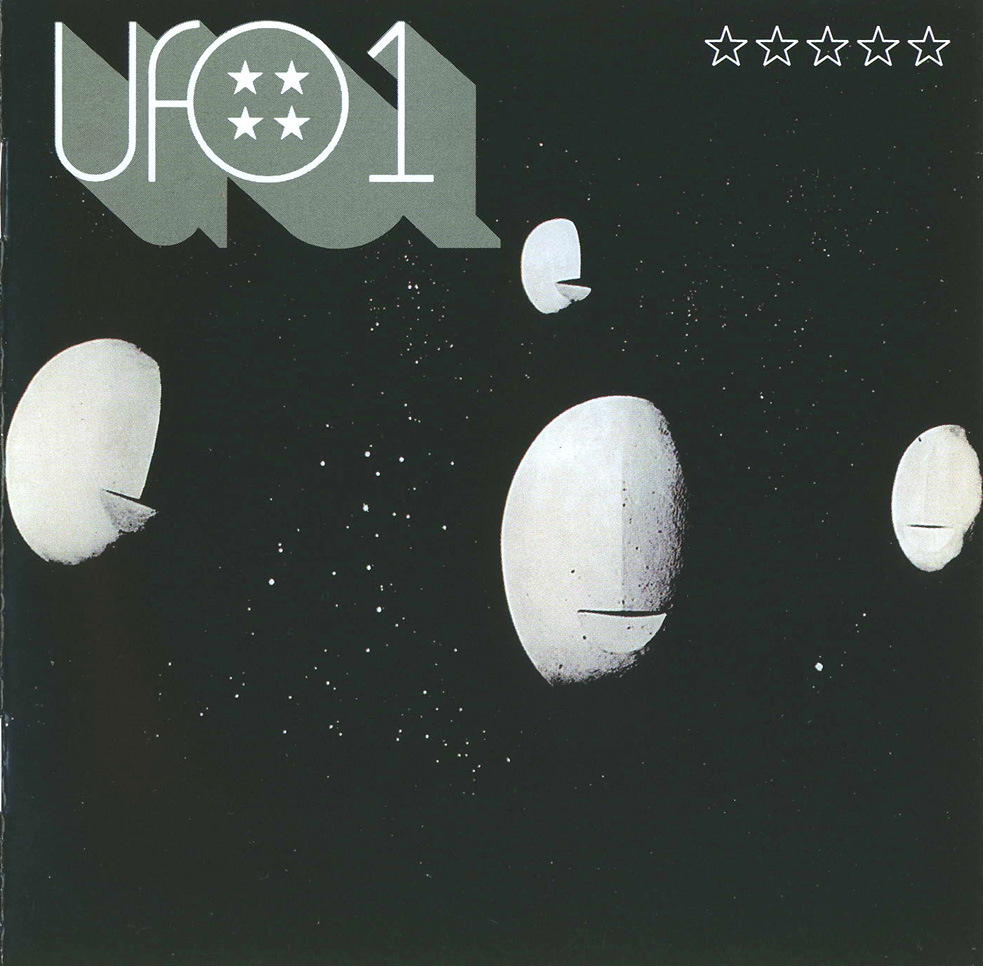 The aptly titled UFO 1 is the band’s very first album, released way back in 1970. With a sound throughout more reminiscent of 60s garage rock than the hard rock fans would come to know them for down the road, this was the band at their earliest and most uneven. Yet, even in this early formative period, they showed traces of what was to come. Highlights include covers of Eddie Cochrane’s “C’mon Everybody” and Bo Diddley’s “Who Do You Love" (the same song  that would later become a huge hit for George Thorogood). The opening instrumental, “Unidentified Flying Object,” is an interesting cut showing off the band’s “space rock” infancy that has been all but forgotten by fans of the band’s more popular material, as do cuts like “Treacle People.” The band here could not decide if they wanted to pursue garage rock or space rock, and as any fan knows, a few short years later, they would go after neither of the above. It is uneven and wild in its execution, but the first album from UFO still manages to spawn its share of highlights. 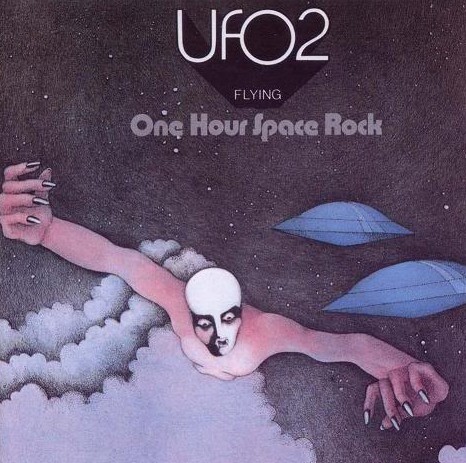 UFO 2 - Flying (with the subtitle of One Hour Space Rock) was the band's second studio album, released in 1971.

UFO 2 – Flying was released in 1971. Much more consistent and polished than the band’s debut record, this is arguably the peak of the band’s pre-Schenker period in the studio. Here the “space rock” of the debut album takes center stage; the band foregoes most traces of their former garage rock sound. Right from the get go, one major difference that listeners will notice is the number of tracks – there are a mere five cuts on the record! That is because the record contains the band’s two all-time longest songs, “Star Storm” and “Flying.” The former clocks in at nearly 20 minutes, where the latter is nearly 30 minutes! Both of these lengthy pieces are interesting, but it is unlikely that anyone but the most die-hard and curious of UFO fans will ever listen to these musical odysseys more than once. “Silver Bird” is a solid enough opening cut, a good track in its own right. The best track on here is “Prince Kajuku,” featuring some great hard rock riffs and a memorable sound and lyrics alike. This is arguably the most famous cut from the pre-Schenker era, and rightfully so. It is followed by the instrumental “The Coming of Prince Kajuku,” which starts soft and melodic, but erupts into a hard rocker before its conclusion. Of the first two studio records, this is the superior and more consistent of the two, though it was also becoming clear that there were limitations to what the band could achieve and accomplish with a solely “space rock” sound. That is not to say this is a weak effort by any means, though! 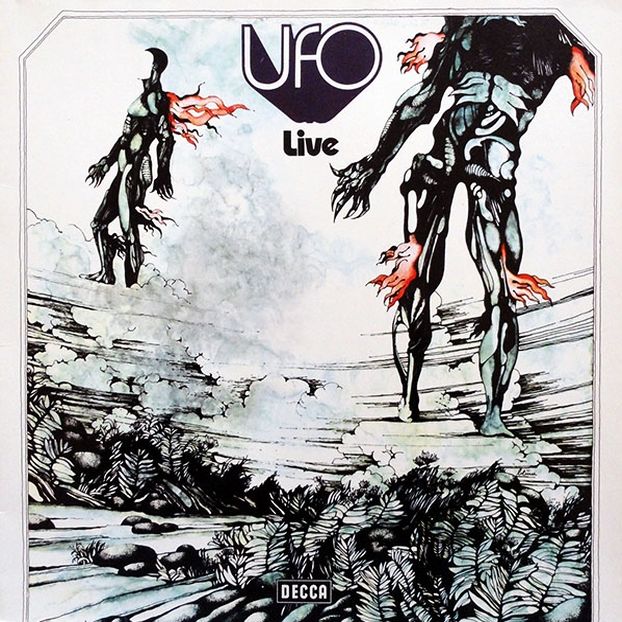 Live was UFO's first live album, released as a follow-up to the first two studio works. It was initially only released in Japan, but was later issued in other territories under alternate titles.

Live was released in Japan in 1972. Before Strangers in the Night, this was the world’s first taste of live UFO. Sadly, the album was largely forgotten in the wake of the classic Schenker period and the iconic live album spawned by that era. Initially released in Japan and then in multiple countries under countless other names, this is a sorely underrated live effort from the early incarnation of the band. You might be pleasantly surprised listening to this one; the band takes many of the highlights from the first two studio records, and does them up in a high energy live setting in front of an eager and enthusiastic Japanese audience. The versions on this record are much more energetic and powerful than their studio counterparts. Many are extended “jam” versions that run longer than the versions on the studio albums, yet the band does not overstay their welcome on any particular song here either. We get a nice mixture of cuts from both studio albums, and these superior on-stage versions are essential listening for the die-hard fans of the band. The fact that the audience is actually enthusiastic and even gets in on some crowd participation definitely adds to the novelty value. It is not the live masterpiece that Strangers in the Night would be for UFO a few short years later, yet it still stands as an amazing live time capsule from this early and oft-forgotten version of the band. 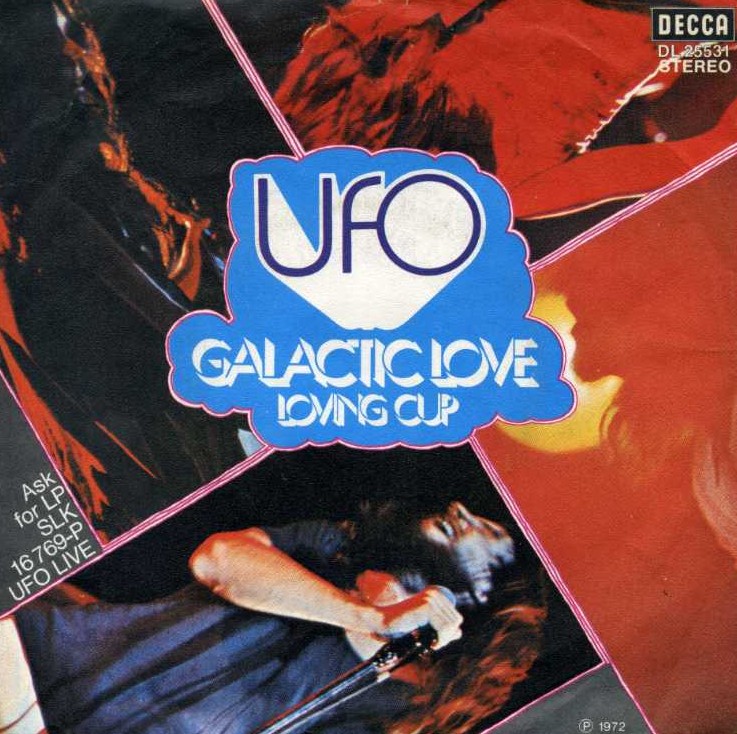 The “Galactic Love” single was released in 1972. This track never made it on one of the actual studio records, though at different times it has been included as a bonus track on certain releases (and likewise, it is included in the Early Years compilations that contain the band’s early work. As the final studio track to be released from the Mick Bolton period, this one is definitely worth hearing. Had this incarnation recorded a third studio album, this gives you an idea of what it may have sounded like, bringing together the best elements of the band’s early garage rock and space rock sounds. Alas, it was not to be. 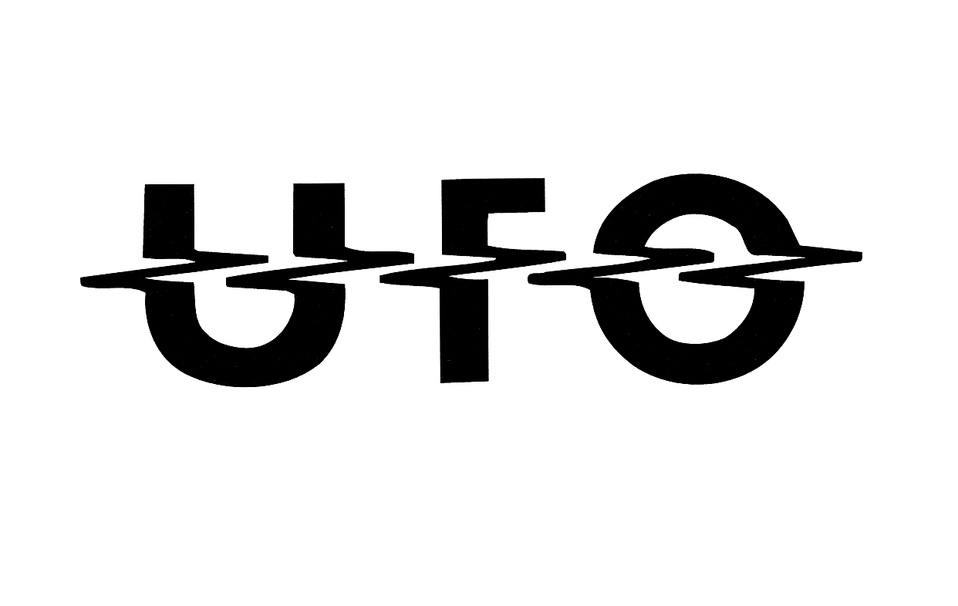 UFO is one of my all-time favorite rock bands, though I will be the first to admit that this early formative period of the band is not for everybody. This is the band struggling to find the sound that suited them best; something that would not happen until Michael Schenker joined the group and they pursued a more straightforward hard rock sound. These recordings have been reissued in numerous shapes and forms over the years (The Flying – The Early Years set pictured above is just one of the compilations bringing together this material; a newer set called Beginnings, which consists of the same material, has been issued as well). In the end, I can recommend this UFO material to only the most curious and die-hard fans of the band, though there are definitely treasures to be had here.

History of the Eagles - Documentary is ...