In the mid 1980s, Shrapnel Records and Mike Varney unleashed guitar phenom Vinnie Moore on an unsuspecting world. His instrumental albums Mind’s Eye and Time Odyssey immediately established him as a lasting presence in the world of rock guitar virtuosos. Over the years, his tenure has included stints with Vicious Rumors, Alice Cooper, and countless others. These days he is best known as the lead guitarist for UFO, but has also played in the supergroup Red Zone Rider. Moore is still rocking hard and continues to do his thing, solo and with other artists alike.

Fans likely wondered if they would see another Vinnie Moore solo album. After all, the man has been busy with UFO and other things as well. Aerial Visions, released in October of 2015, marks Moore’s first solo album since 2009’s To the Core. For the album, Moore has teamed up with a band that includes his UFO bandmate Rob De Luca, and the engineering work of Joey DeMaio, of Manowar fame.

Vinnie Moore is truly one of the busiest men in rock and roll, juggling countless bands and tour dates, plus recording new material with UFO (they put out a new album earlier this year) and on his own, as has been evidenced here (we will see if we eventually get a new Red Zone Rider album). How does the latest release from Moore fare? Is this 80s guitar virtuoso still at the top of his game after all this time? 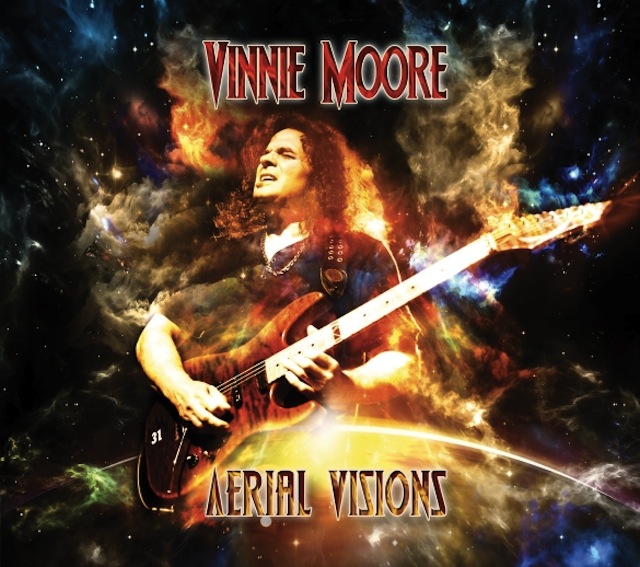 As a long time fan, I can safely say that Vinnie Moore is up to his old tricks again, and in the best of ways. Aerial Visions is another great instrumental guitar album from Moore, staying true to his classic style, but also feeling new and fresh at the same time. It is highly unlikely any fan of his will be disappointed with what they hear on Aerial Visions.

The album is surprisingly diverse. Opening cut “Mustang Shuffle” brilliantly juggles classic bluesy sounds with heavy metal riffs. The cover of ZZ Top’s “La Grange” is a major surprise, which stays true to the original (sans lyrics of course) but gets the Vinnie Moore treatment in the best of ways. One of my personal favorite cuts on the record is “Calling Out,” which feels like it would not be out of place on one of his UFO albums; these are some of Moore’s best riffs and melodies. Closing cut “A Million Miles Gone” makes for a fitting conclusion, throwing everything but the kitchen sink at the listener. From softer, acoustic melodies, to some of his speediest and most aggressive playing, this closing cut has it all. Through the record, we get a nice mixture of heavy and melodic stuff alike, showing us just how diverse and talented a guitarist Moore remains, even all these years later.

Are you asking this rock and roll fan whether or not you should rush out and buy Aerial Visions? The answer is a resounding YES. Commitments to UFO and Red Zone Rider have not stopped Vinnie Moore from doing his own instrumental thing, which he still performs beautifully. Aerial Visions is a fantastic album from one of the most criminally underrated men in the rock and metal world. Very highly recommended to any fan.

The Former Voice of STP and Velvet ...