It has been a long and interesting journey for Queensryche. The legendary progressive metal band has sold millions of albums around the world, and forged a name for themselves unlike any other. Recent years saw the departure of classic vocalist Geoff Tate, who formed his own incarnation of the band (since redubbed “Operation: Mindcrime”) with the “main” band recruiting former Crimson Glory vocalist Todd La Torre to take his place, with whom they have recorded two albums.

This latest Queensryche tour comes in the wake of the release of Condition Human, the band’s second album with Todd La Torre as frontman. The group still features classic members Eddie Jackson on bass, Scott Rockenfield on drums, and Michael Wilton on guitar. Second guitarist Parker Lundgren, who joined the band in 2009, is still present as well.

This show took place at the Hard Rock Café on the Las Vegas Strip (not to be confused with the other Hard Rock Café in Vegas, which is located just outside of the Hard Rock Hotel and Casino on Paradise and Harmon). Despite being a major classic rock, hard rock and metal concertgoer in the Vegas Valley, this is actually only the second time I have seen a show in this particular venue. The property itself is divided into three floors – the ground floor is the gift shop and box office, the second floor is the restaurant, and the top floor is the bar and concert venue. The concert area itself is a good size, with a great sound system. Furthermore, for anyone who wants to step outside, a balcony area that overlooks the Strip makes for a great diversion from the music. The venue is definitely one of the more unique for seeing a rock show in Vegas, and this fan hopes to return in the near future. 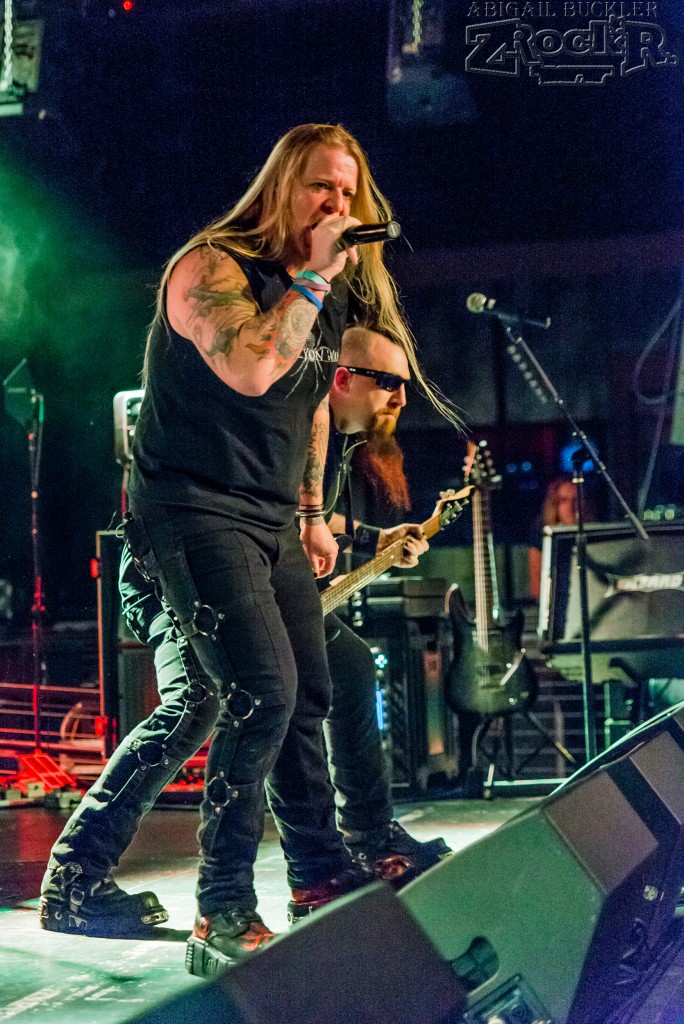 Of course, a band like Queensryche, with a 30+ year reputation to their name, is not going to tour unattended and without support acts. In the case of this particular evening of rock and roll, the group was accompanied by two opening bands; Halcyon Way and Meytal. Prior to this night I was not familiar with either, but due to the fact that I am always excited about new talents in the rock and metal world, looked forward to hearing what these bands brought to the table.

Halcyon Way started the show, taking the stage at roughly 8:00 PM (doors had opened at 7:30). It is difficult to really nail down a particular sound for this group, but probably the best way one could describe them would be something like “Linkin Park without the rapping.” They put on a solid performance with tight musicianship, even if they probably are not a group I would have listened to had I not heard them at this show. Their lead vocalist, who looked like he could have been Sebastian Bach’s long lost bastard son, brought a lot to the table, and we got some fantastic work from the guitarists, even if their overly guttural backing vocals were a bit nauseating at times. That said, I give Queensryche major credit for taking a band out on the road with them like this, which is not simply a Queensryche clone.

Meytal took the stage second, following a brief intermission. The first thing that immediately caught my eye about the second support act was that its rhythm section consisted of two sexy women! If you want to get my attention, this is absolutely a great way to do it, and the fact that they had the musical talent to back it up definitely came as a nice addition. I admit to not being too enthralled with the band at first; the early moments felt a bit generic modern rock to me. But as the set went on, these players won me over. Later songs got slightly more progressive, with more complex and intricate, melodic backing instrumentation (I cannot say for sure if these were prerecorded effects or sounds produced using guitar equipment; you can do so much with that stuff these days). The highlight of this set for me, being an old school heavy metal fan, was hearing a surprisingly solid cover of Dream Theater’s classic hit song “Pull Me Under.” All in all, a solid second set of the evening despite some initial doubts. 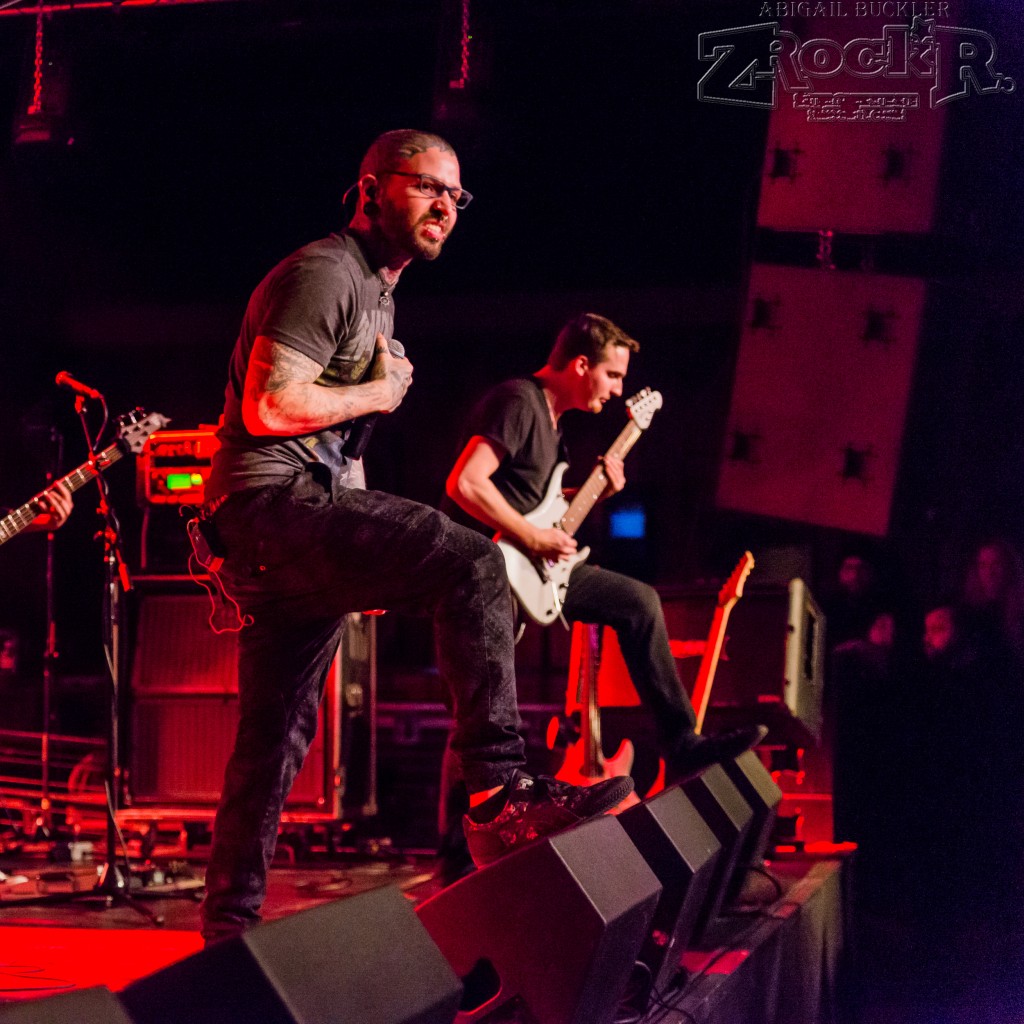 Of course, it was Queensryche that attracted the masses to this particular show, and by the time they hit the stage, the venue had already become packed. Around 10:00 PM, Scott Rockenfield took his seat at the drum stool and began pounding away, with each member of the group being introduced through video screen footage as they entered (definitely a better way of doing it than speaking names verbally to an audience that cannot hear over all the noise anyway). Before long, all five men had taken the stage and were ready to rock. Having seen the Geoff Tate version of the band multiple times in the past few years, I was all the more eager to finally be able to experience the “main” band with Todd La Torre on vocals.

Many questions were running through my mind prior to this show. Would the group only be playing songs from the new albums they recorded with Todd La Torre? Would it be classic hits? Would it be deep cuts? Would La Torre’s performance be worthy of the Queensryche name and legacy? Does the band still have it after over three decades? More on each of these things later.

Prior to the show, people at the box office were asking if it was “all original members.” One woman bitched after buying her ticket upon arriving inside the venue that she felt “ripped off” because Geoff Tate was not singing. I cannot say for sure if the people in question were won over by La Torre’s performance (or in some cases if they even decided to attend the show) but one thing is for certain. 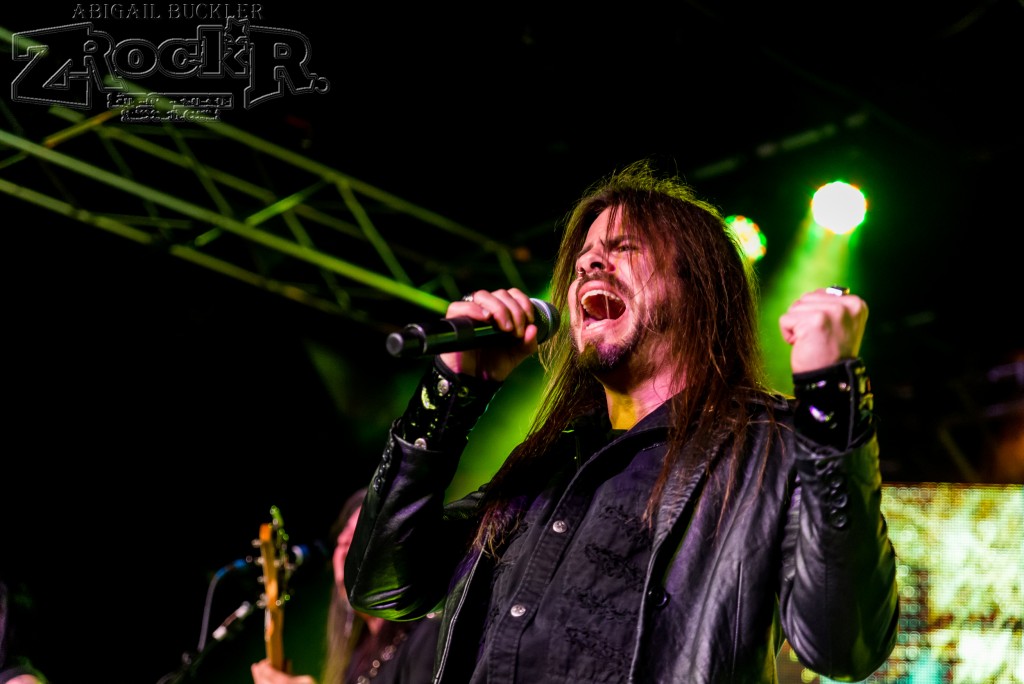 I was spending much of this show in the company of fellow rock fans and musicians from around town in the audience. Many of them had never seen La Torre perform live, nor had they heard the albums that he sang on. Amongst those people I was near at this show, cries of “this guy kicks ass” and “this guy can sing” quickly became commonplace. The Ryche has found the new frontman it needs to survive in the 21st century. Following some rather stagnant and less than impressive albums with Tate, as their chemistry faded, the presence of La Torre has completely restored and reinvigorated the band. This fan had positively reviewed the La Torre-fronted records, including Condition Human, and is especially pleased and proud to say that the man more than delivers on the live stage. 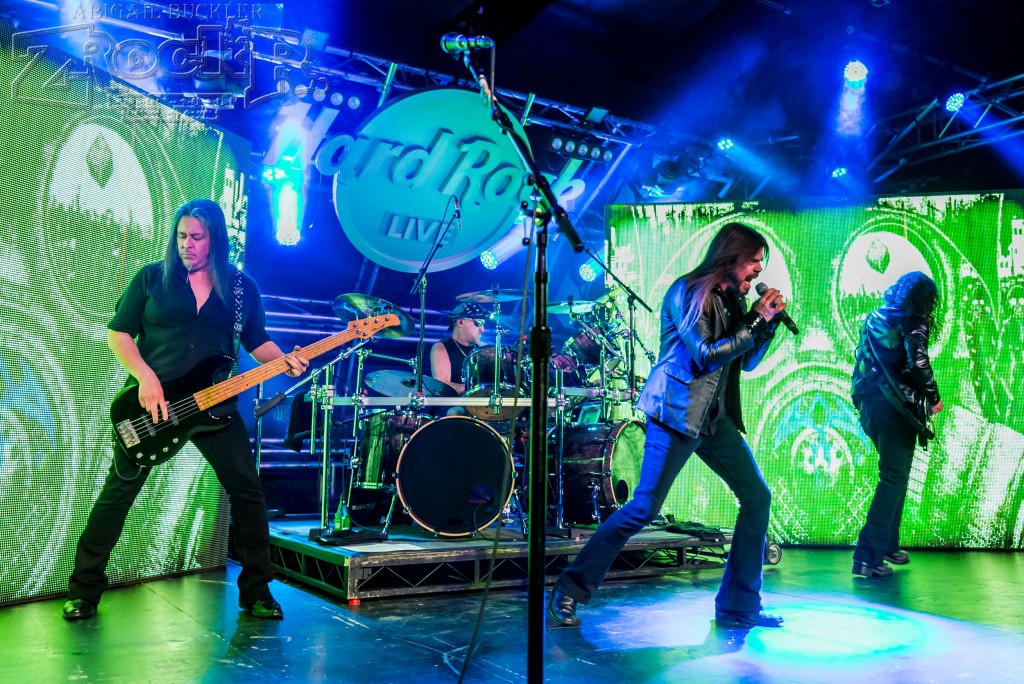 One of the surprisingly inventive and effective tools used at this show were the video screens. Using these at a concert (particularly in bigger arena settings) is not uncommon, but here the band actually managed to put the gimmick to great use. This including showing a music video for one of the new songs, classic animations and lyrics for the older songs, and various band logos. The band and crew managed to make this feel like an actual innovative tool for the experience, and not just something to try to cover up lackluster musicianship (which these guys certainly do not suffer from in their reinvigorated state!)

Remember how earlier, I was pondering whether the setlist would be all new songs, all old hits, or deep tracks from the older days? The great news is that it was actually all of the above. Newer songs were kept to a fairly comfortable minimum, but the band did manage to squeeze in some fantastic songs from Condition Human and the 2013 self-titled release to an enthusiastic audience that welcomed the material with open arms. Classic hits played from the band’s glory years were inevitable and plentiful as well, with the title cut from Operation: Mindcrime, “Best I Can,” “Empire,” “Jet City Woman,” “Take Hold of the Flame,” “Queen of the Reich,” and “Eyes of a Stranger” all making appearances in the performance.

A major surprise was the “deep” material that was performed. “Damaged,” from the 1994 Promised Land album, was a major surprise. And how about “Screaming in Digital” and “Killing Words” from the group’s 1986 sophomore LP, Rage for Order?

There were a few cuts omitted from the set I would loved to have heard, namely “Walk in the Shadows” and “Revolution Calling.” “Redemption” from the 2013 album would have been a nice addition as well. But these are merely minor complaints in the grand scheme of things; the band completely revamped their setlist to incorporate so much, past and present alike, including tunes that have not been played live in decades. Crafting a setlist is one of the toughest things a live touring band with a 30+ year legacy must do, and overall they succeeded beautifully in these regards. Other fans are not likely to disagree. 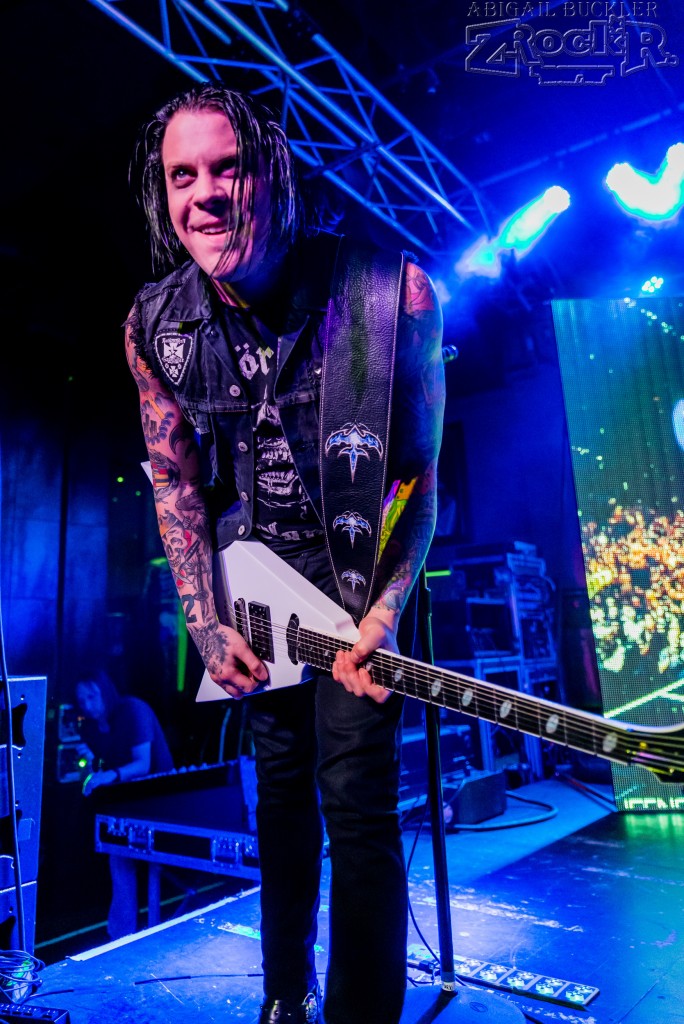 What about the performances of the songs themselves? Okay, I miss Chris DeGarmo as much as the other fans do, but this is the best lineup the band has had in years, and they more than do justice to the material. One thing that is surprising is how similar Todd La Torre sounds to Geoff Tate in his prime. The former Crimson Glory frontman is right at home in Queensryche, but I am also proud to say he does not mimic Tate either. Anyone in attendance saw first-rate musicianship and these songs being done justice like never before in the more recent decades of the band’s career.

If you have the opportunity to see Queensryche live and are a fan, do not hesitate to go. You will get your money’s worth and then some. It is great to see the band reinvigorated at long last, ready to take on the world all over again. In the meantime, pick up Condition Human, and see all the evidence you need that the Ryche has returned, and in fine form. This was only my first concert of 2016, and I already have a feeling it could land a spot on the “Best of the Year” list when the time comes. The band absolutely delivers in a live concert setting, no questions asked. 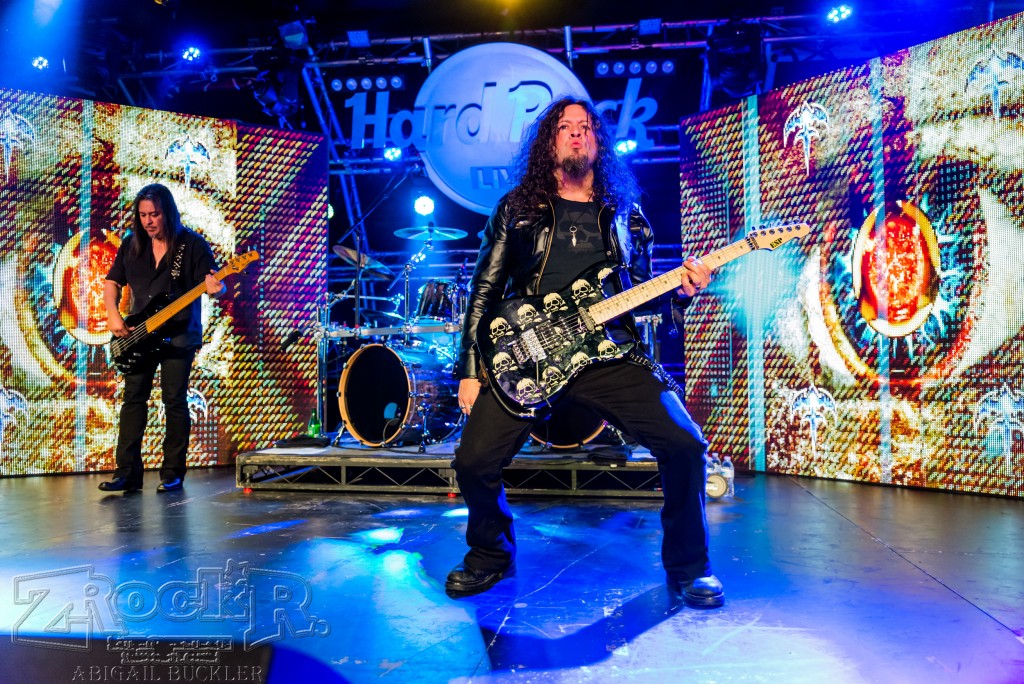