Home›Reviews›Queen - A Night at the Odeon Captures the Band on a Classic Tour!

Queen - A Night at the Odeon Captures the Band on a Classic Tour!

Note that this review is strictly for the CD edition of this release.

Leave it to Eagle Rock to keep the vintage live Queen stuff coming.

1975 saw the release of A Night at the Opera, arguably Queen’s best known record, and certainly their most ambitious to the time. With a budget far more massive than its predecessors (at its time of release it held the record for most expensive album ever made) this ended up being the album that truly brought the band mainstream success. Who amongst us has not heard “Bohemian Rhapsody” at some point in their life?

A Night at the Odeon is a 2015 release of a show that Queen recorded at the Hammersmith Odeon (Now the Hammersmith Apollo) on Christmas Eve 1975; it was the final date of a UK tour supporting A Night at the Opera, and is noteworthy for being the first time the band's future hit "Bohemian Rhapsody" was recorded live in concert. The band’s fourth and arguably most famous record had only come out a few weeks prior, and had beautifully demonstrated the band’s music diversity and evolution. As with many of the live Queen performances that Eagle Rock has been bringing us audio and video releases of, this one has circulated as a bootleg for years.

As this is a live recording from relatively early in Queen’s long and illustrious career, it does not ignore the earlier albums the way later releases would, and of course, came long before the group heavily incorporated keyboards and synthesizers into their music. The setlist is almost exclusively comprised of cuts from the group’s first three records: Queen, Queen II, and Sheer Heart Attack. The only track from A Night at the Opera to appear here (unless the “God Save the Queen" outro is counted) is “Bohemian Rhapsody,” which is actually missing its opera section and is performed as a medley of sorts with some of the other older cuts. Surprises come in the form of the standard “Big Spender,” and a “Jailhouse Rock” medley. 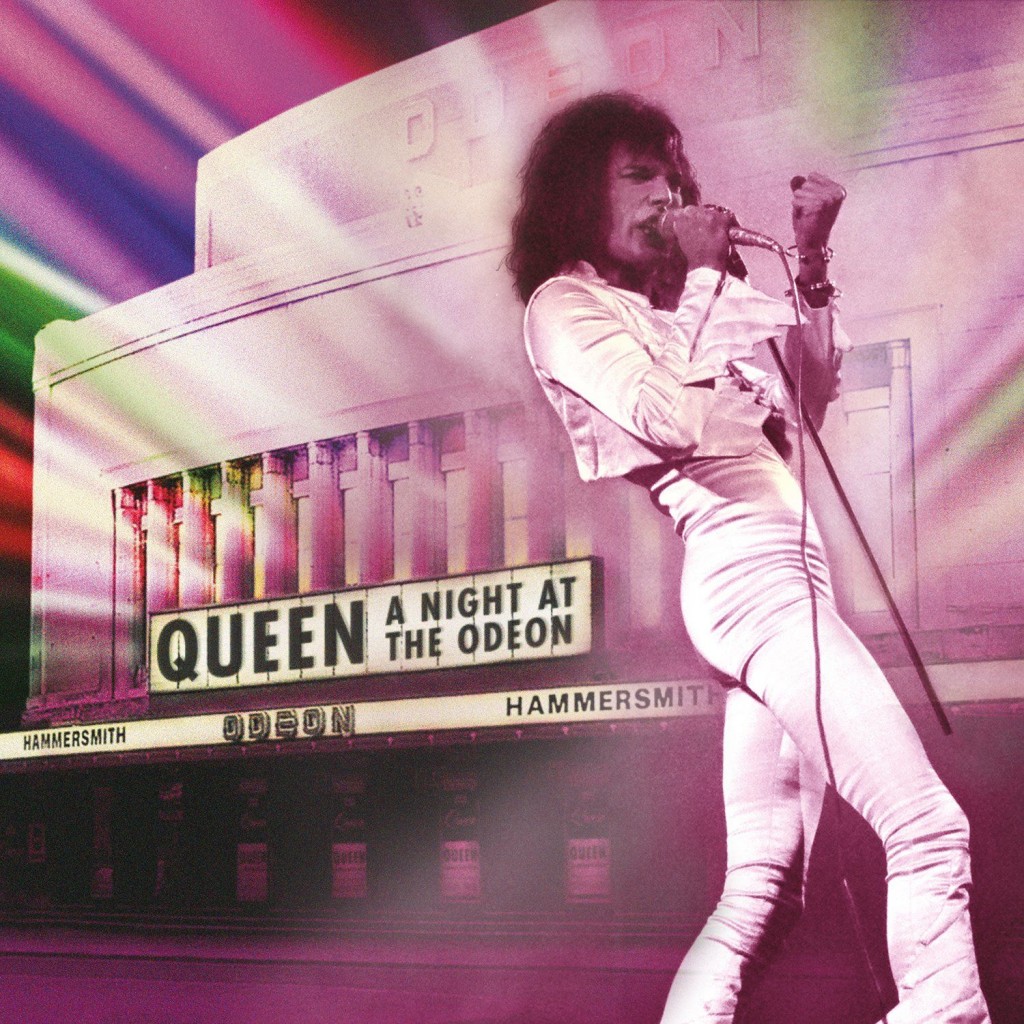 A Night at the Odeon is a live CD release from Queen, capturing the band in December of 1975, in the wake of the release of their now classic A Night at the Opera record. Eagle Rock has also released the show on DVD and SD-Blu-ray Disc.

Queen fans will absolutely want to get their hands on this release (video versions are available as well, which the die-hards may want to spring for). More casual fans may want to get something like Live Killers or Live at Wembley, but this is a solid release from an era of the band that is, amazingly, underrepresented in the form of live material.

Overall the performance is fantastic, though it is surprising that A Night at the Opera is not represented very well in the setlist, despite being the release the group was touring to promote at the time. This “medley” version of “Bohemian Rhapsody” is admittedly not the best; it really loses something without the opera section (but even then, when the band began playing the song live in later years, they used a pre-recorded version of said section due to the sheer musical complexity). It would have been nice to have gotten some more of the cuts from A Night at the Opera; some surprising omissions are John Deacon’s hit pop song “You’re My Best Friend,” the Roger Taylor-sung “I’m In Love with My Car,” Brian May’s acoustic gem “39,” and of course, Mercury’s “Love of My Life.” That said, fans can rest assured that the package does represent an accurate depiction of the band’s setlist at the time. It is just surprising to see how little the band actually played from the record they were promoting!

The biggest problem that I had with the release was that too much of the live recording is comprised of lengthy periods of crowd noise and applause; on at least two occasions this goes on for several minutes! I can understand being enthralled if one was there in person, but to someone listening to the concert on CD, this does not do the listening audience any favors.

And yet, the good far outweighs the bad. The cover versions of “Big Spender” and the “Jailhouse Rock” medley were real surprises. Getting faithful and strong renditions from the “Early Queen” era of the first three albums is reason enough to own this release, if you were a fan of those oft-forgotten and underrated albums.

If you are a Queen fan, any flaws here will be ultimately negligible. In fact, I am always astonished at how much Eagle Rock continues to dig out of the vault for their rock and roll fans. A Night at the Odeon is a fantastic concert, and this CD is definitely worth picking up for any fan of the band. Die-hards may want to spring for one of the premium releases with video, however.