The Graduate - The Criterion Collection Reissues the 60s Classic

The Graduate, directed by Mike Nichols, was originally released in theaters in 1967. The film stars Dustin Hoffman, Anne Bancroft, Katharine Ross, and Murray Hamilton. The musical score is composed by Dave Grusin, with songs by Simon and Garfunkel. The film had previously been released on Blu-ray Disc by MGM/20th Century Fox and StudioCanal.

In The Graduate, Benjamin Braddock (Hoffman) is a young man returning home to California after earning a degree from a university on the East Coast. Nervous and uncertain about his future, including graduate school and career choices, he contemplates his options and is seduced by Mrs. Robinson (Bancroft), the sexy wife of his father’s business partner (Hamilton). The two begin an affair of sorts, but things become all the more complicated when Ben finds himself attracted to Elaine (Ross), who also happens to be Mrs. Robinson’s daughter! Before long, all hell breaks loose and Ben finds himself facing a personal crisis of sorts, trying to win Elaine back despite the opposition of her parents and her return to school.

The film was first released in theaters in 1967 (note that this image is NOT from Criterion's Blu-ray and does not reflect the image quality of the release).

The Graduate is a classic film that stands the test of time, and remains revered as a classic. Part comedy, part coming of age drama, it remains revered by a wide variety of audiences and critics. Great performances from the cast, relatable characters, a memorable soundtrack of Simon and Garfunkel music, gorgeous cinematography, and classic moments throughout ensure that this film that will leave an impression on anyone that watches it, and will certainly merit repeat viewings.

Arguably the greatest asset The Graduate has working for it is the performances of its cast members. A young Dustin Hoffman is absolutely brilliant as the nervous and uncertain Benjamin Braddock; this was one of Hoffman's first feature film roles. No one could have played this part better, Hoffman’s Ben is comically nervous and uncertain of his future, and arguably the most relatable character the film has to offer. His transformation from unsure, inexperienced young man to someone who will relentlessly chase after what he wants most in the world helps the film to stand the test of time. Although Hoffman has since starred in countless other films over the past half century, this may very well remain my personal favorite part he has ever played. Anne Bancroft is equally impressive as the devious yet seductive Mrs. Robinson; again a role for the ages that could not have been played this well by any other actress. Who else could have been this despicable and detestable, yet the object of desire of many a young man? 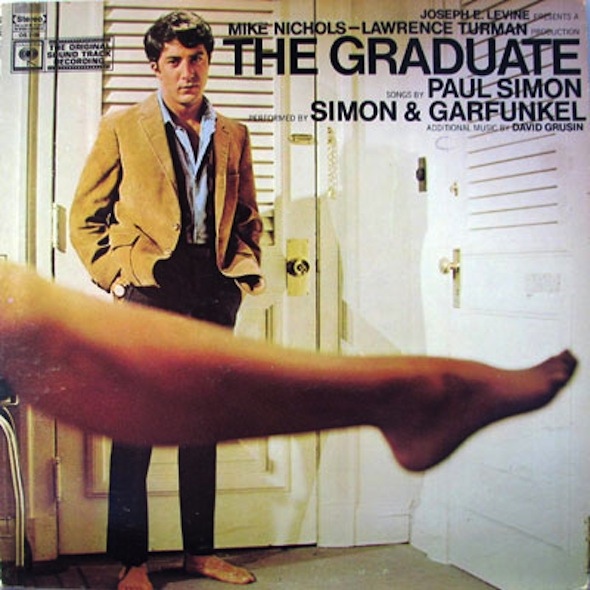 The film's classic Simon and Garfunkel soundtrack is one of its greatest assets.

The supporting cast does not get talked about as often, yet should not be overlooked either. Reviews for the film praise Hoffman and Bancroft, yet often overlook Katharine Ross in her part as Elaine Robinson, who becomes a genuine romantic interest for Ben as the film progresses. Living in her own state of uncertainty, she brings in a genuine performance that certainly deserves more attention than it gets. Murray Hamilton (probably best remembered for several years later playing the mayor in Jaws) does not get many scenes as Mr. Robinson, but leaves an impression in each one of them. We even get brief cameos from then unknowns Richard Dreyfuss and Mike Farrell!

The look and sound of the film are equally impressive. The Simon and Garfunkel soundtrack is one of the most memorable elements of the movie, and one thing people truly take away after watching it. Even though the duo was already popular when the film was released, the presence of their music never feels overdone or contrived, and actually suits the atmosphere of numerous scenes very well. In fact, “Mrs. Robinson,” which went on to become one of the duo’s biggest hits, made its first appearance in this film, albeit in an unfinished, early version (the actual “complete” single and album version that appeared on Bookends does not appear in the movie and/or its soundtrack, as it did not exist at the time).

Cinematographer Robert Surtees gives the film an amazing look and feel; nearly every frame of the movie looks like a piece of art you could hang on your wall, be it Ben reclining in the pool, racing his car across a bridge against the backdrop of the ocean, or a panning out shot of a college campus. This unique look for the movie has helped it to remain a time capsule of a bygone era, all these years later.

The film largely succeeds because it is relatable to the audience, and despite having a gripping, coming of age story, does not stray far from humor either. The majority of the humor is verbal and witty; the film rarely descends into slapstick territory, and perhaps rightfully so. Young men growing up can surely relate to Ben’s predicament; who amongst us has not wanted to become friends with benefits with the neighborhood milf? Even Mrs. Robinson, devious as she may be at times, remains somewhat relatable, being trapped in a dead end loveless marriage she was forced to rush into as a youth. You will definitely be laughing in more than a few parts of this film, but moved by the more dramatic elements in a few as well.

The ambiguous ending of the film (I will not spoil it here for those who have not seen the movie yet) scores points for not being an obligatory “Happily Ever After” one. Decisions are made by characters throughout the movie that have a lasting impact, and likely will continue to have such following where the movie cuts off and ends. You will be left wondering what happens to these characters and the future they could end up having, if one is even possible.

Criterion’s Blu-ray Disc release is not the first release of the movie on Blu-ray, but it is by far the best one. The image quality is far superior to the earlier releases, featuring the remastering treatment generally only Criterion gives to the films they release. It looks and sounds better than it ever has, and audio quality is equally impressive. A plethora of bonus features, including rare interviews and screen tests, only adds to the overall package. Even if you already own the movie in some shape or form, the Criterion is worth the double dip.

Criterion does justice to The Graduate, giving the film what is by far its all-time best home video release on this Blu-ray Disc. If you are a fan of the movie, this package is a must own.

DISCLAIMER: All images in this review are the property of their respective copyright holders, including MGM, Fox, StudioCanal, and The Criterion Collection. Images are not pulled from the Blu-ray disc. For promotional use only. All rights reserved.