Although at my core, my first love in instruments is the guitar, I don't attend many of these kind of shredfests. I've only been to one G3, and although it was awesome, I'm more drawn to concerts where the lead guitar is not necessarily the focal point of the whole night. Perhaps it's because I place the song above virtuosity, although I definitely appreciate great musicianship as a musician/vocalist/songwriter myself. But given the eclectic lineup, I figured I NEEDED to attend this outing. 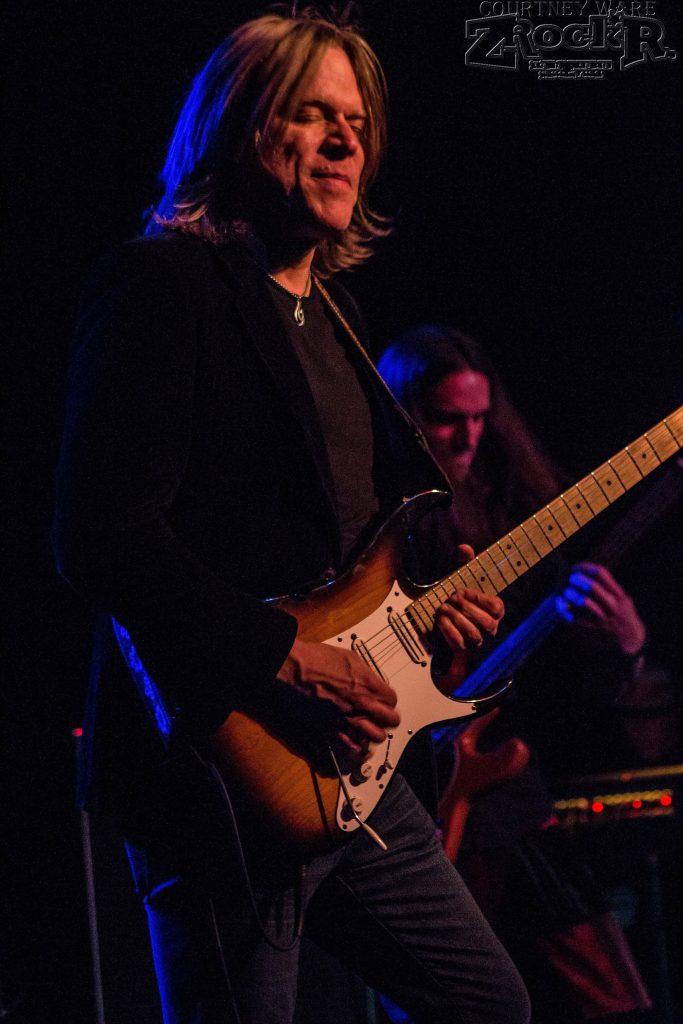 Brad Bailey, I was told, was a fine performer who did 2 or 3 songs on acoustic guitar. I guess I'll catch him next time provided I know when he hits the stage.

Next up was an excellent bluesy three piece, the Max Rico Band, who performed some songs made famous by Stevie Ray Vaughan, Jimi Hendrix, War, and Santana. All of the performers tore it up, not the least of which was Betty Vance on bass.

I'd been looking forward to see Andy Timmons perform again. He was definitely a fiery axeslinger in his Danger Danger days when I saw that band open for Faster Pussycat in '89, so I knew he couldn't have backslid in skills now. If anything, he was able to truly let his technique shine. Admittedly, I don't own any of his output since DD's sophomore LP, but I was aware of his involvement with Kip Winger, Paul Stanley and a few others over the years. Eschewing any Danger Danger tunes, he still played some killer material that kept the crowd interested, among the instrumentals was The Beatles' "Strawberry Fields Forever," as well as a self-described Yngwie J. Malmsteen-type song called "Workout."

It was cool and worth noting that throughout the night's show, members of the different bands came and went to join some of the others. 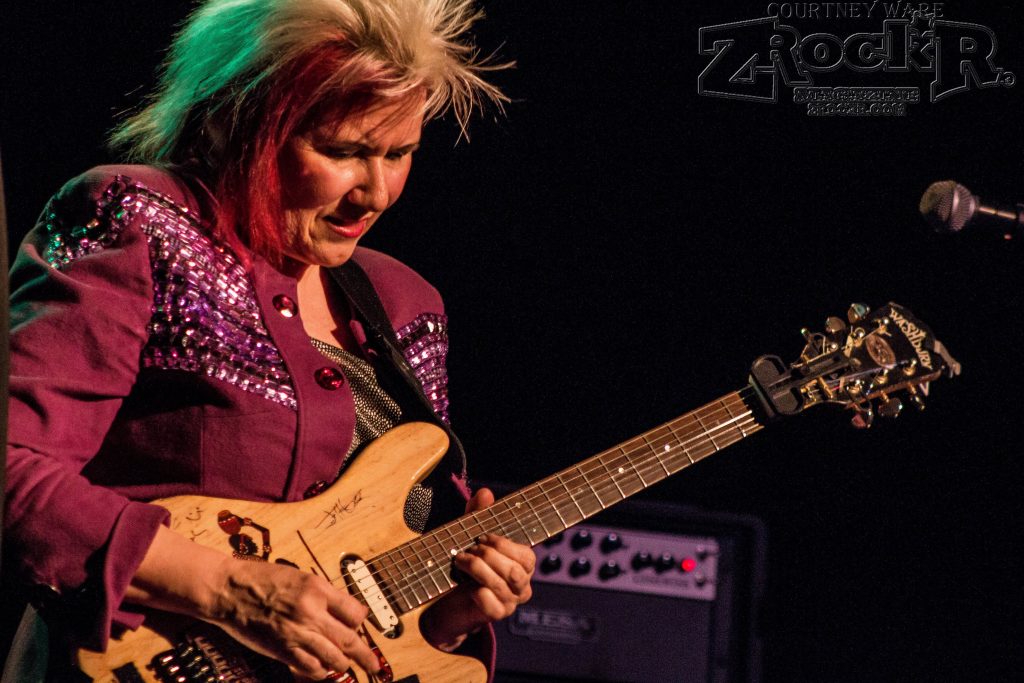 Jennifer Batten I'd seen perform once before as well. It was a clinic either in '94 or '95 at Hollywood's GIT school when I was a student. Impressive then, certainly astounding these days as well. As to be expected, her set list was comprised all of instrumentals as well. Among the stand-outs was one called "Cat Fight" and a quirky mashup (a stylistic thing she's apparently known for lately) which combined a Jaco Pastorius song with Nirvana's "Smells Like Teen Spirit." Also interspersed were snippets of ZZ Top, Steely Dan, Van Halen, and Aerosmith among numerous others. Sounds zany, but trust me, it worked and kept me and others on the edge of their seats waiting for the next twist and turn. She played along to music on her laptop while images on a TV screen added to the flair of her formidable six string musings. Since she first got on the musical radar in a big way by being Michael Jackson's lead guitar on the Bad (1987–1989), Dangerous (1992) and HIStory (1996–1997) world tours, her performance of the "Beat It" solo was a great way to end her part of the show.

As with the last two performers mentioned, although I was familiar with some of their output, the same applied to Uli Jon Roth. I knew that he was the lead guitarist on Scorpions' second through fifth studio albums, and on the esteemed live opus Tokyo Tapes, as well as having a band called Electric Sun for several years after, prior to having a lengthy solo career since. However, aside from Taken by Force, I didn't own any physical copies of his work. Sad? Sure, could be. But who has the time and money to own everything by every performer they've ever enjoyed? The point was to finally see his greatness up close and in person, since he has created quite the body of work and his legend in guitar circles is mentioned in reverential tones. 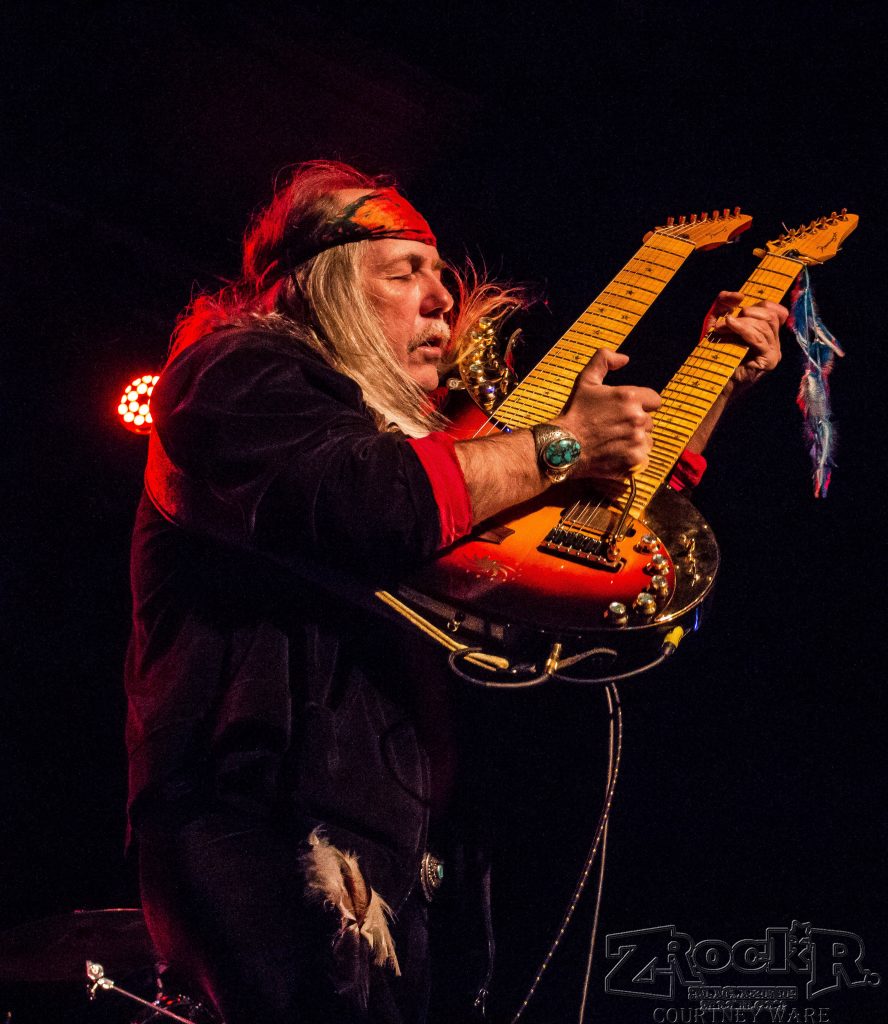 Opening with "All Night Long," Tokyo Tapes' lead-off track, the frenzied pace of his band's performance never let up. Uli is known for his unusual Sky guitars with extra frets that also have scalloped fretboards. He also employs unusual scales on the guitar in his compositions. Vocalist John West (who was a short-lived replaced for Ray Gillen in Badlands) sang lead on a couple of selections.

Virgin Killer was the only Scorpions LP that songs weren't gleaned from, but that didn't disappoint the faithful who heard "Dark Lady," "We'll Burn the Sky," "The Sails of Charon," and "In Trance," among others. "Still So Many Lives Away," off of Electric Sun's Earthquake sounded fantastic, as did "All Along the Watchtower" and "Little Wing," on which both Timmons and Batten joined his band and traded solos to close out the show.

If there was a minor complaint, it's that the show started slightly before 9p and stopped around 2a, which was probably a surprise to those who had to work early on Thursday. But then again, how often does one get to take in so much talent for only $17?

As with most concerts I end up attending, this one comes highly recommended and I urge you see these performers the next time you're able to.