1979 saw the arrival of vocalist Graham Bonnet into Rainbow; it was his first foray into classic hard rock, a path that would take his career in a completely different direction. Down to Earth was the first (and subsequently, only) studio album from Rainbow to feature Bonnet, although he would go on to play with other acts, most notably Michael Schenker Group and Alcatrazz. To this day he is still going strong with a new band.

Bonnet’s final gig with Rainbow was headlining the first Monsters of Rock Festival at Castle Donington in 1980; this festival would become a legendary event in the world of hard rock and heavy metal in the years to come, and the Bonnet-fronted Rainbow was its first ever headliner. This would be drummer Cozy Powell’s final gig with the band as well.

As Bonnet’s tenure with Rainbow was disappointingly short, fans have long been clamoring for more material from this period. In particular, the band’s 1980 Donington show has been frequently bootlegged over the years. Eagle Rock has finally given us an official release in the form of this CD/DVD set. 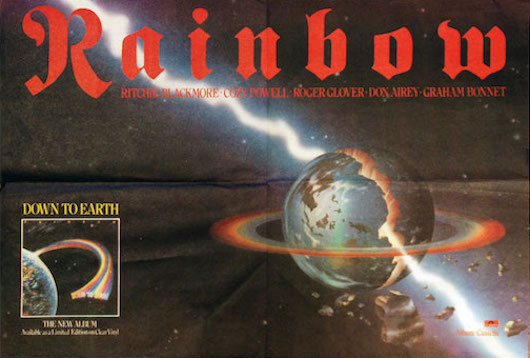 Rainbow played this 1980 show in support of the Down to Earth album, released the previous year.

For many Rainbow fans, Bonnet’s last gig with the band represents a pinnacle of what they were capable of at this point in time; there is a reason that bootlegs of this show have remained so popular over the years. I for one have always considered Graham Bonnet to be a criminally underrated name in the Rainbow legacy; one that has employed many players over the years. Clocking in at about 76 minutes, the audio portion of this gig features a mixture of Bonnet-era Rainbow hits and some gems from the Ronnie James Dio period redone with Bonnet at the helm, plus a surprise Goffin/King cover from Bonnet’s past the audience was not likely expecting!

If you could not figure it out already, the CD portion of this set kicks ass. This is Rainbow at a prime in an all-too-short period of their existence, with the Blackmore/Bonnet/Powell/Airey/Glover lineup at their absolute finest. It is likely the band knew this would be their last show together (a remark from Bonnet about Cozy Powell during seems to imply this), but they give the audience the show of a lifetime. If you are a Rainbow fan, it is highly unlikely the CD, featuring 76 minutes worth of the band at their best, will disappoint you. An essay in the booklet from rock journalist Malcolm Dome puts things in perspective nicely as well.

Unfortunately, the DVD portion does not hold up nearly as well, instead only giving us visuals for a mere 30 minutes of the concert, and no bonus features! The DVD omits some of the best moments of the show, including the solos and “Since You Been Gone,” easily the biggest hit from this era of the band. Audio and video quality on the DVD are surprisingly good given the age and frequently bootlegged nature of the material, and we certainly get a good look at Bonnet's on-stage charisma, but why do we get such a small sampling visually, while the CD gets the royal treatment? No official explanation has been offered, though my guess would be that these are the only surviving video elements, or that not every part of the show was filmed. It is not unlikely that relevant bonus material exists, especially considering Bonnet was interviewed not long ago for The Ritchie Blackmore Story documentary.

Die-hard Rainbow fans who want to hear more from the short-lived Graham Bonnet era will get their money’s worth with this CD/DVD set from Eagle Rock, though the short and limited run time of the DVD and lack of bonus material/interviews/etc. are a disappointment. This is a fantastic CD release overall nonetheless, though one more for the established fanbase. An easy recommendation for any Rainbow/Bonnet fan.