Captain America: Civil War is film number 13 in the growing Marvel Cinematic Universe, which started back in 2008 with the release of Iron Man. A year has passed since the events of Avengers: Age of Ultron, and a disaster during a mission results in the loss of several innocent lives. The government steps in, wishing for powered and trained heroes to no longer act on their own authority. The ratification of these new accords splits the team down the middle, with Captain America opposed, and Iron Man in favor. What follows tears the team apart, but there may be another villain beneath it all, manipulating events in an attempt to achieve what others in the past opposed to the Avengers could not.

Civil War is easily one of the most eagerly awaited films in the Marvel Cinematic Universe, with the stakes higher than ever before, and a plot that brings in radically different elements than what earlier movies had, while at the same time retaining the MCU’s past sense of drama and humor alike. Old and new heroes alike clash and join forces here, giving the movie a huge cast of characters. And while there are some shortcomings in a few of the film’s elements, overall this is the most fun I have had at the movies in a long time, and fans of the franchise will not be disappointed by the new installment. 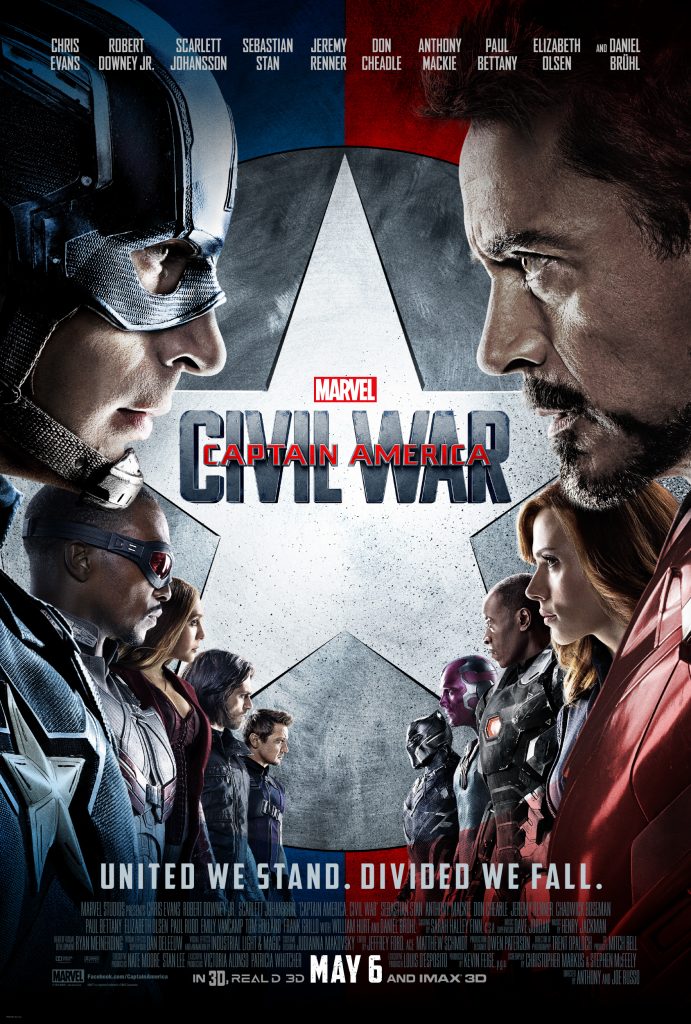 Captain America: Civil War is the thirteenth film in the Marvel Cinematic Universe.

The performances and character portrayals remain the strongest and best elements of the MCU. Chris Evans is still fantastic as Captain America, the super soldier from the 1940s reawakened in modern times, and Robert Downey, Jr. remains entertaining as Iron Man, the chauvinistic, wisecracking millionaire playboy turned armored hero. If you have been following these characters since their big screen debuts a few years back, you will be pleased to know that things come full circle here. Past tensions hinted at in previous movies fully come to fruition this time around, and the supporting cast fares equally well. Thor and Hulk are absent from this movie, but will be appearing together next year in Thor: Ragnarok.

Of course, one thing getting talked about a good deal in press for the film is the arrival of two new and highly awaited characters into the MCU, Black Panther and Spider-Man (they appear in the trailers so this is not a spoiler). A tragic man in his kingdom who recently inherited the title of king, and a wisecracking teenager doing his own thing, these characters are polar opposites, and in a way, foils of one another. The best part here is that the two are in the movie just the right amount; each gets a chance to shine, but never so much so that they feel like they are distracting from the central plotline of the film. Both characters have a solo film coming up in Phase Three, and their portrayals here have me all the more excited for those.

The central plotline is equally appealing and entertaining. It is not just another “let’s kill aliens or terrorists” outing this time around; the ratification of accords to regulate and govern how heroes operate makes for thought provoking drama and keeps things interesting. At one point the movie essentially turns into a prolonged battle royale between the two sides; more or less a fan’s dream come true that never lets up. One thing that has always impressed me about the MCU is the filmmakers’ abilities to effortlessly combine drama, humor, and action alike. You will find plenty of all of the above in Captain America: Civil War.

While the new “villain” introduced here does not necessarily take center stage nor does his story feel totally original, he scores points for trying a radically different approach to take down our heroes, and actually manages to come off as something tragic and sympathetic despite his actions. Like other villains in the MCU he never quite becomes as compelling or interesting as the heroes, but it was interesting to see a villain that was not simply an alien or a powered/technologically enhanced person. 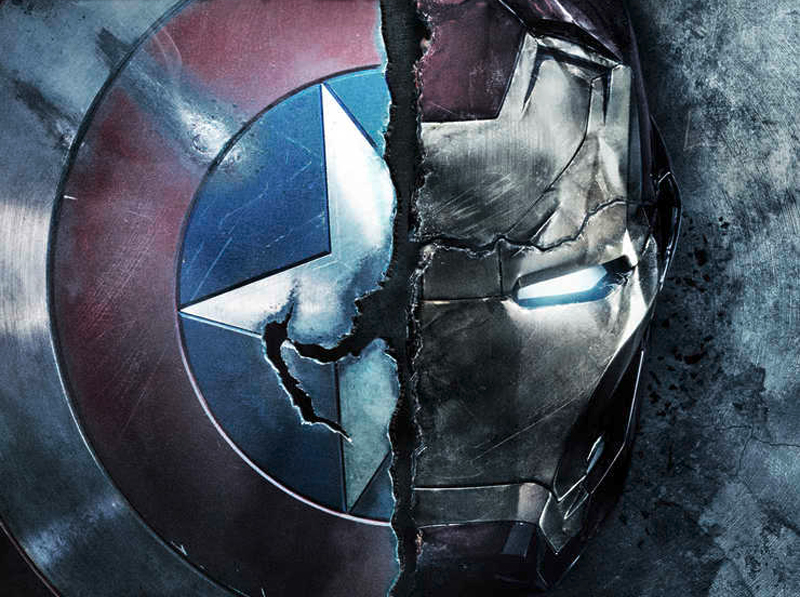 Differences in views split former friends apart in this film, eight years into the MCU.

The film is not perfect, one of the biggest issues being that there is too much going on, and a lot of plotlines introduced in older movies do bleed over into this one, forcing it to be the one that takes actions towards trying to resolve and seal it all. A few subplots and elements could have been trimmed to make a tighter, more concise film. The number of unpowered "side characters" gets to be a bit much at times, as well. Also, you will not want to see this film until you have seen the prior relevant MCU movies; this is a LOT of characters and plot that a viewer will be hit with, and you will most definitely be confused if you do not come in with the background, considering we are looking at about a dozen heroes here! That said, the film is still far better put together and enjoyable than a certain other “superhero vs. superhero” movie that another comic book company put out earlier this year.

The other big problem with the movie is a more stylistic one. When a new location is featured in the movie, the name of said locale appears in giant letters that cover the entire screen. This is annoying and actually covers up a good portion of the establishing shot or what happens to be going on. Other movies simply used smaller lettering at the bottom or the bottom corner of the screen, why not just do that here? Fortunately, this is probably the biggest complaint with the movie I have.

Captain America: Civil War moves the Marvel Cinematic Universe along in fine form, and does so with a few twists and turns along the way, careful not to remove what has worked so well for the MCU thus far. You will want to see the other MCU films prior to this one (chances are you already have). This is the culmination of nearly everything in this franchise to date, and the end result is packed with humor, action and drama that never let up. Even in its 150 minute run time, you will never be bored. Very highly recommended!

DISCLAIMER: All images in this review are the property of their respective copyright holders, including Marvel Studios and Disney. For promotional use only. All rights reserved.

Deep Purple - Revisiting the Legendary Made ...