Home›Features›Uriah Heep - A Look Back at the Band's Classic 1973 Live Album!

By early 1973, Uriah Heep had released five studio albums and had already made a name for themselves, with a sound all of their own, fusing elements of progressive rock and hard rock. They were one of the most unique bands of their era, and remain revered by fans of the genre all these decades later.

The next thing on the radar for the legendary band was a live record, which fans got in the form of Uriah Heep Live in the spring of 1973. Featuring the legendary lineup of vocalist David Byron (RIP), guitarist Mick Box, keyboardist Ken Hensley, bassist Gary Thain (RIP), and drummer Lee Kerslake, the double album was recorded in January of 1973 in Birmingham. Initial CD releases of the record omitted the closing track due to the constraints of the day, but it was reinstated for later CD issues. A more recent expanded edition of the album, released in 2004, includes bonus US radio show and film mix songs on a second disc.

The program, displaying the tracks performed on this live album.

You are not going to see Uriah Heep Live mentioned on the lists of great 70s live albums like KISS’ Alive! Or Deep Purple’s Made in Japan. Does this release belong on such lists, or is it a rightfully forgotten release that pales in comparison to the group’s already excellent studio records?

Uriah Heep Live might just the best moment of the band’s classic 70s era, with their ultimate lineup in fine form. Why this record does not get more recognition from classic hard rock fans all these years later is complete and utter blasphemy; the record shows off just how great these guys were on a live stage back in their initial prime. Essentially, this is the greatest lineup the band ever had, showing off their musical prowess in a high energy setting, pulling out all the stops for the fans. This is the way the band was meant to be remembered, captured on album. To Heep fans the record is sacred, and rightfully so.

This is not simply a “greatest hits live” album, nor are the cuts here copycats of the studio versions either. The group plays a wide assortment of tracks covering most of their first five records, including the well-known cuts and deeper gems alike. Each member of the band gets more than a few chances to shine; Ken Hensley’s organ never sounded better than it does on this release, and the late, great David Byron gives a vocal performance for the ages. The classic “Gypsy” gets the “extended” treatment, turned into a 13 minute plus jam here! The wide variety of tracks keeps things interesting throughout; even with the extended jam versions of many of the songs, there are no dull moments in sight. The “Rock and Roll Medley” shows off the band’s more humorous side while at the same time paying homage to their early rock and roll heroes, and it makes for a comical yet appropriate finish to it all. 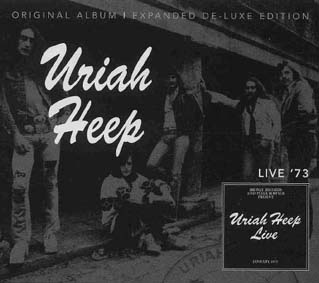 The album has received a number of reissues over the years.

Which version of Uriah Heep Live should you buy? Your best bet is the remastered expanded edition, which includes the complete original album on the first disc, and extra radio show and film mix tracks on the second as bonuses. Steer clear of early CD pressings that omit the “Rock and Roll Medley.”

Uriah Heep Live is one of the greatest live rock albums of the 70s, and it is a damn shame you are not going to find this one mentioned on “great live albums” lists like a number of other works of the era; the band is on fire here and gives the show of their career. If you are a fan of classic hard rock/progressive rock, this album will not disappoint. Very highly recommended!

X-Men Apocalypse - The Ninth Film in ...