Aftermath: Life Debt, by Chuck Wendig, is the second book in the Star Wars Aftermath Trilogy, set in the months following the events of Return of the Jedi. It serves as an immediate sequel to last year’s Aftermath, and the three-part story will be concluded in next year’s Aftermath: Empire’s End.

Following the events of the first Aftermath book, our new heroes are out on missions to bring in surviving Imperial officers who have not surrendered themselves and are looking to continue waging war in the name of the waning Galactic Empire, with a mission that is taking them across the galaxy to many different worlds. Meanwhile, Han Solo has set out on a personal journey to help his longtime companion Chewbacca, but that takes him far from his beloved new wife, Princess Leia, who is now playing a role in the establishment of a New Republic to lead the galaxy in the Empire’s absence.

Meanwhile, a cluster of surviving Imperials has rendezvoused in an undisclosed location, where Grand Admiral Rae Sloane finds herself at odds with a new, mysterious “puppet master” Fleet Admiral, prompting her to take action on her own terms, and further flinging into uncertainty the future of the Empire following its disarray amidst the deaths of Emperor Palpatine and Darth Vader.

The first Aftermath book in this series from Chuck Wendig was immediately bashed by longtime Star Wars fans for a number of reasons, not the least of which being the strange “present tense” narrative, and the inclusion of a gay character (although other forms of Star Wars media had already done the latter). This fan personally thinks the first book was unfairly bashed and had far more going for it than people gave it credit for. Life Debt maintains the present tense storytelling, which is sure to be a point of contention for other fans, but I got swept up in the story and was enjoying myself once again. This book is not perfect either, but it is superior to the first Aftermath in many regards, a major one of which being that we do not have to go through the "origin stories" for the new characters again, and can instead get right back on with enjoying the adventure.

First of all, I give credit to Wendig for actually working with the “new” characters and making them believable and enjoyable to follow; even after the Aftermath Trilogy ends, this fan would gladly find himself following these same characters into additional novels or spin-off comics. Who knows; maybe they could show up in the films one day. Seeing the galaxy through the eyes of fleshed out “side characters” of sorts helps to put an interesting perspective on things.

“Classic” characters do appear here, albeit in lesser capacity and without as much screen time as the newbies described above. Han Solo remains a fan favorite, with his relationships with both Leia and Chewbacca providing much of the points of interest here. You will see a few familiar Rebel Alliance faces as figureheads in the fledgling New Republic as well. Even a “new” character introduced in the spin-off Princess Leia Marvel Comics mini-series makes a brief appearance!

Despite it all, the Imperials may be the most interesting characters of the lot, namely the conflict between Rae Sloane (who is fast becoming a favorite character in the new canon) and the mysterious new Fleet Admiral, who was only teased at the end of the first Aftermath book. As much as I would love to go into details here, I will hold back to avoid spoilers. But suffice to say, you will be all the more eager to read Aftermath: Empire’s End at the beginning of next year, finishing off the series. 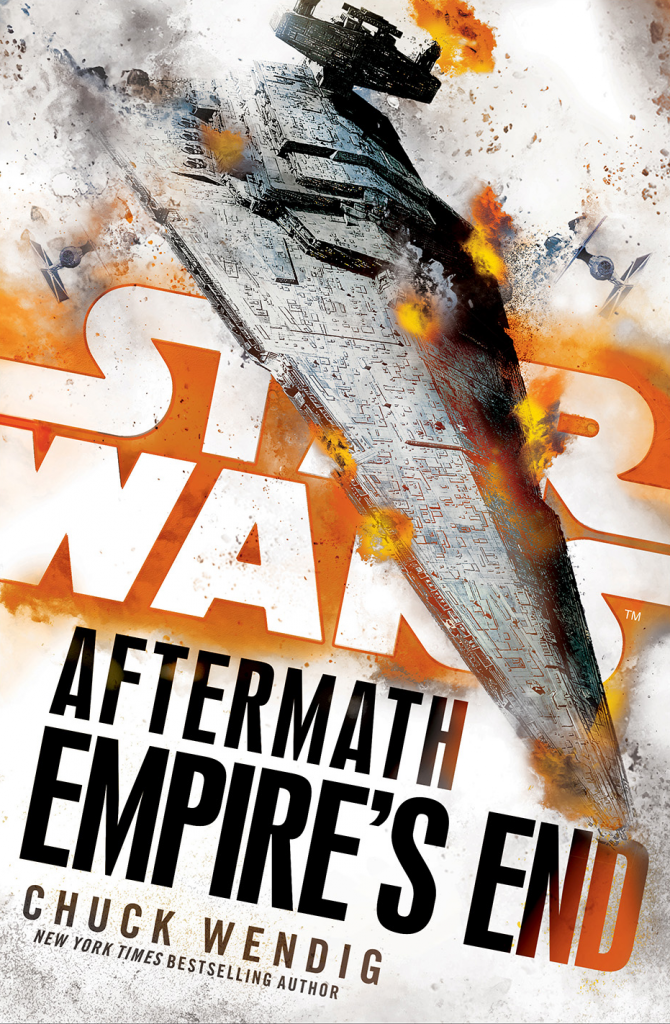 This story will conclude in Aftermath: Empire's End, coming January 2017.

It is also nice to see a Star Wars book that is not all about using the Force, and Jedi/Sith lightsaber battles, which are entertaining in all forms of media the franchise presents, but a bit overdone. You get to see some of the more political aspects of the galaxy, and much like the first Aftermath, this one too uses “interludes” every few chapters to help paint a picture of the galaxy from multiple perspectives in this transitional time. You will wish some of these stories had been better fleshed out, but perhaps they will come full circle in the next book.

I did have a few minor complaints with the otherwise excellent book (I will not go off on the present tense narrative since too many reviews already have; I was not bothered by it as much as you would think). One issue is that Wendig does tend to go a little overboard with “sexual” moments and dialogue. Not that I mind this stuff, but at times it seemed eerily out of place and comical for all the wrong reasons. (One line of dialogue states an attractive tough alien woman would “mount [Han Solo] like a turret” if given a chance. Really, I’m not making this up!)

There are also still a few too many characters and subplots, as well as a few too many unexpected plot twists, particularly later in the book (though the interludes are still a welcomed addition). Again, this is something where I do not want to go into further details, in order to avoid spoilers.

Perhaps no Star Wars author has divided audiences more than Chuck Wendig with these Aftermath books, but this fan found that the good far outweighs the bad when it comes down to things. If you have an idea of what to expect coming in, chances are you are going to love this book that helps illustrate the Galaxy Far Far Away in a post-Imperial state of affairs. Aftermath: Life Debt comes strongly recommended!