A huge blow was dealt to Twisted Sister in 2015, with the passing of their legendary drummer AJ Pero. The group had a mass following in the 1980s upon their being signed to a major label, despite years of contention and begin ignored by all the companies. But they persevered, and it paid off in a big way. The group even reunited in the early 2000s to reclaim their throne in the hard rock and heavy metal community. This was a triumph for them and their fans.

Pero’s passing was definitely a tragedy, and one felt by many souls in the hard rock and heavy metal community. Legendary Dream Theater/Adrenaline Mob/Winery Dogs drummer Mike Portnoy would fill Pero’s gap to fulfill tour dates. One such show was the Metal Meltdown show at the Hard Rock Hotel and Casino in Las Vegas, Nevada, playing alongside Great White, Extreme, and Skid Row (each of these sets is apparently going to receive its own respective “Metal Meltdown” release in the future).

Audiences packed the venue in anticipation of being able to catch Twisted Sister, paying tribute to their fallen comrade, and in addition, bringing a talented drummer in his stead to do justice to the classics. Twisted Sister’s Metal Meltdown package consists of a live Blu-ray Disc, a DVD with the same content in standard definition, and a CD with the live performance material. 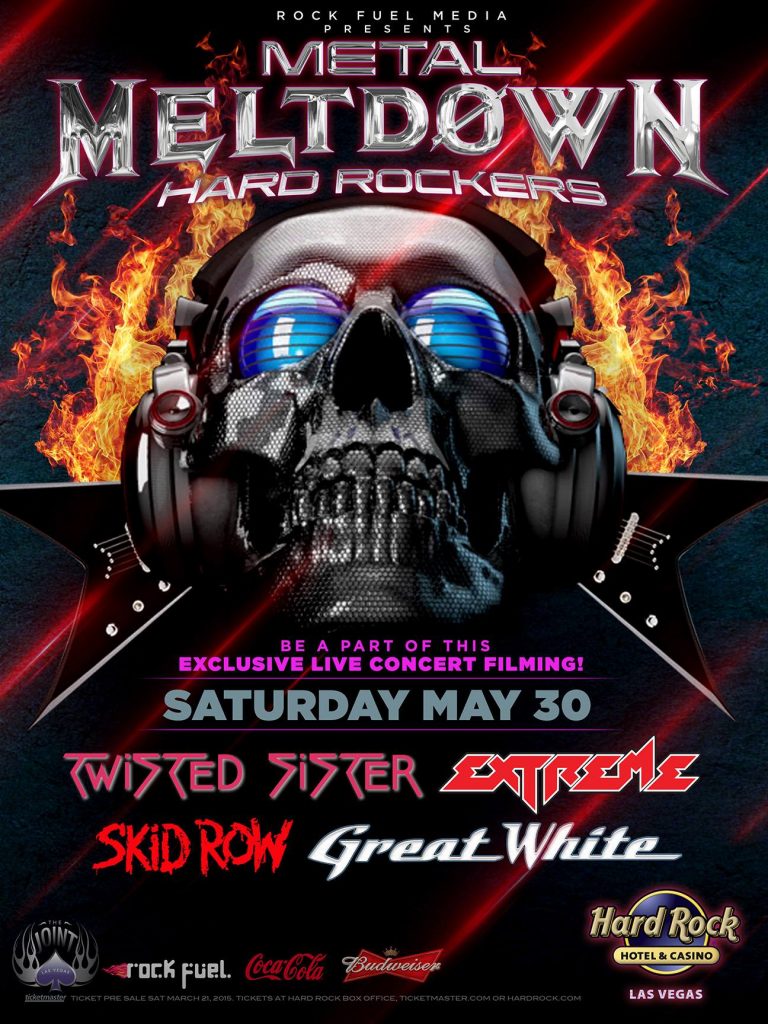 If you have any doubts about the quality of the Twisted Sister performance on this disc, cast them aside now. Dee Snider, Eddie Ojeda, Jay Jay French, and Mark Mendoza still bring the thunder and then some. Snider may have a bit of an ego with some of his “we’re the best live band ever” remarks on this disc, but I am pleased to say he brings a performance that largely delivers on that promise. These guys do not acknowledge that they are aging whatsoever, and bring everything they have to the live stage. Mike Portnoy, according to the band, had very little time to rehearse the material. If you did not hear that, you would not know it otherwise. AJ Pero never can and never will be replaced, but you could not ask for a better man to fill the gap for this show.

The show on this disc is fantastic and features the band at their absolute best. Unfortunately, the disc makes an all too common mistake that concert home video releases tend to make – breaking up the flow of the concert by inserting interview clips in between songs and the like. As this footage is already in the accompanying documentary, why did they have to do this? It hurts the flow of the show on the disc, and as such, you are going to get a lot of repetition between the concert and the doc segment in the special features.

Fans of Twisted Sister will not be disappointed with the concert on this disc, aside from the needlessly inserted clips from the accompanying documentary. The show itself delivers and then some.

The Blu-ray Disc looks and sounds impressive enough; no fan should be disappointed with the technical specifications here. Bonus features include a documentary and a brief “photo gallery” segment. The documentary is an interesting look at the band’s career overall, and features interview clips with rock personalities like Joe Lynn Turner, Ron "Bumblefoot" Thal, Scotti Hill, and Eddie Trunk. Sadly it is nowhere near as comprehensive as the We Are Twisted Fucking Sister documentary released earlier by the band. This documentary, despite containing some great content (it is an overview of the band’s WHOLE career rather than just their early formative period like the aforementioned one), makes the same mistake as the concert segment, adding WHOLE SONGS (not just clips) from the concert into the middle of the documentary! Why would you do this? It is an interesting doc on the history of the band, but this completely ruins the flow of things, and as I stated above, results in a heavy amount of redundancy when you watch the show or the doc back to back. Keep the concert footage in the concert segment, and the documentary footage in the documentary portion. If the other portions of this concert get their own standalone Metal Meltdown releases, I hope the manufacturers learn from their error here.

Despite the redundancy issues between the concert and the documentary, this is a terrific live CD/DVD/Blu-ray Disc package from Twisted Sister, and a fitting tribute to the late, great AJ Pero. Fans will absolutely want to add it to their collections.

Concerto for Group and Orchestra - Deep ...