Flotsam and Jetsam Bring Metal Back to Vamp’d!

Every once in a while it’s nice to think outside the box. Get out of your comfort zone. Be adventurous. Expand your horizons. See a band, two, or even three that you normally wouldn’t. That’s exactly what I decided to do on a rare Friday night off from my regular gig. 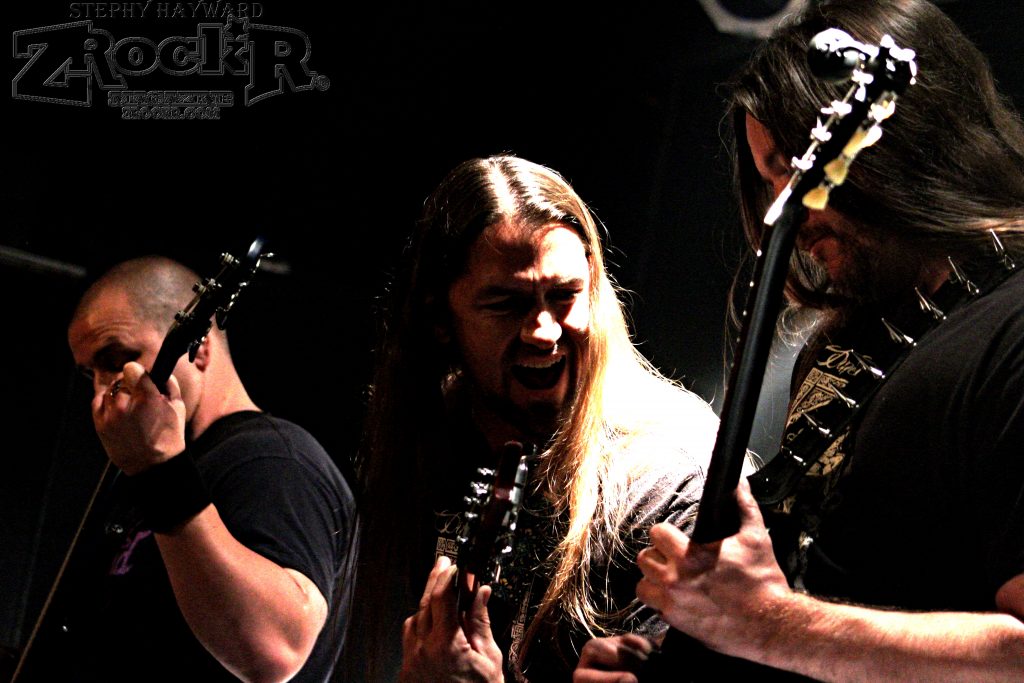 The first band, Dinner Music for the Gods, has been around for a few years, and I’d heard that they were pretty good. I wasn’t quite sure what genre of music they played, but I had my suspicions. In a time when many bands nowadays seem to have guys with short hair, these guys at least had three of the members wearing their locks long. They were quite thrashy, yet knew when to employ dynamics, the drummer using mallets on his cymbals on one song, even adding some Spanish flavor here and there. Jimmy, the bassist, attacking his blue Ibanez Prestige, shone on a brief bass solo in one of the songs: the twin guitar team tore it up on their Paul Reed Smith and Les Paul axes. Do yourself a favor and go see them. Even if thrash isn’t your thing, this quartet offers enough melody in their instrumentals to keep it interesting. 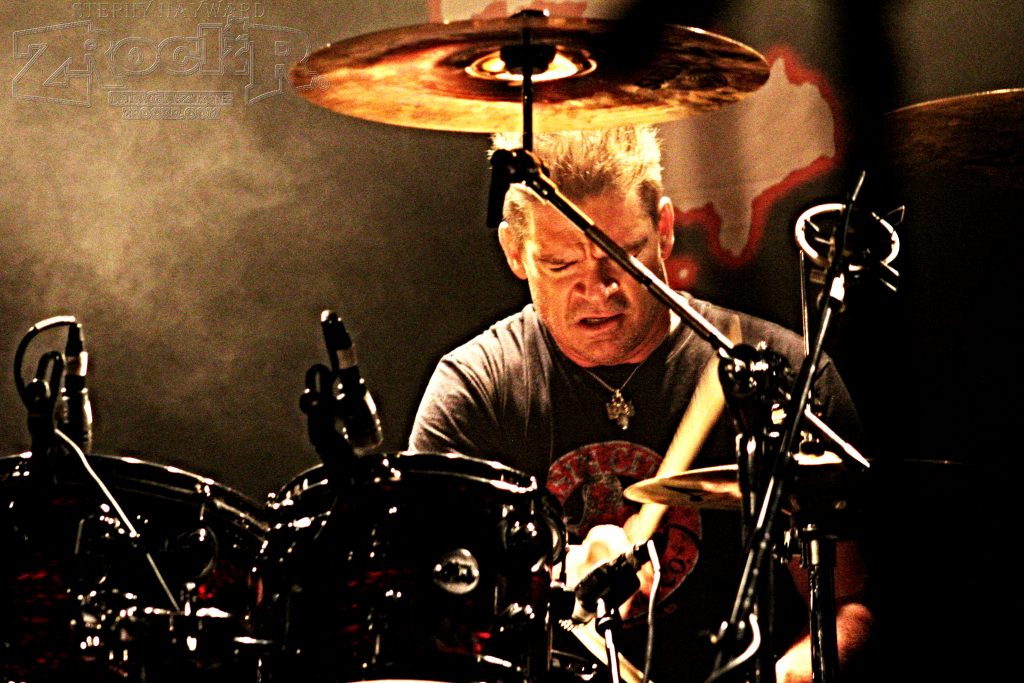 Next up: Abusement Park. I knew the lead guitarist Jason Constantine, a formidable axeman, from the local scene. I also knew that they debuted recently on a Wednesday night jam here. This then seemed to be their first “official” gig, opening for a band that their drummer, Craig Nielsen, was in for roughly 14 years until 2011. The quintet strictly performed covers, and had two guest co-lead singers (Brendan Shane of Wretched Sky and Chase Grijalva) grace the stage for a couple of songs. Admittedly, I was only familiar with two of the seven songs played: “Sober” by Tool and Metallica’s “Damage Inc.”, but then again, I confessed earlier that this genre wasn’t exactly my favorite, with the exception of a band or two who mine this territory. But to me, bands such as Megadeth and Metallica do it with a certain panache that make it sonically palatable to more than just a cult following.
Onto the headliner: Flotsam and Jetsam, who chose to kick off their current tour here in Sin City. If nothing else, I figured I’d check them off of an extended “bucket list” since bassist Jason Newsted, once of the aforementioned Metallica, was a founding member long since gone. In fact, the sole original 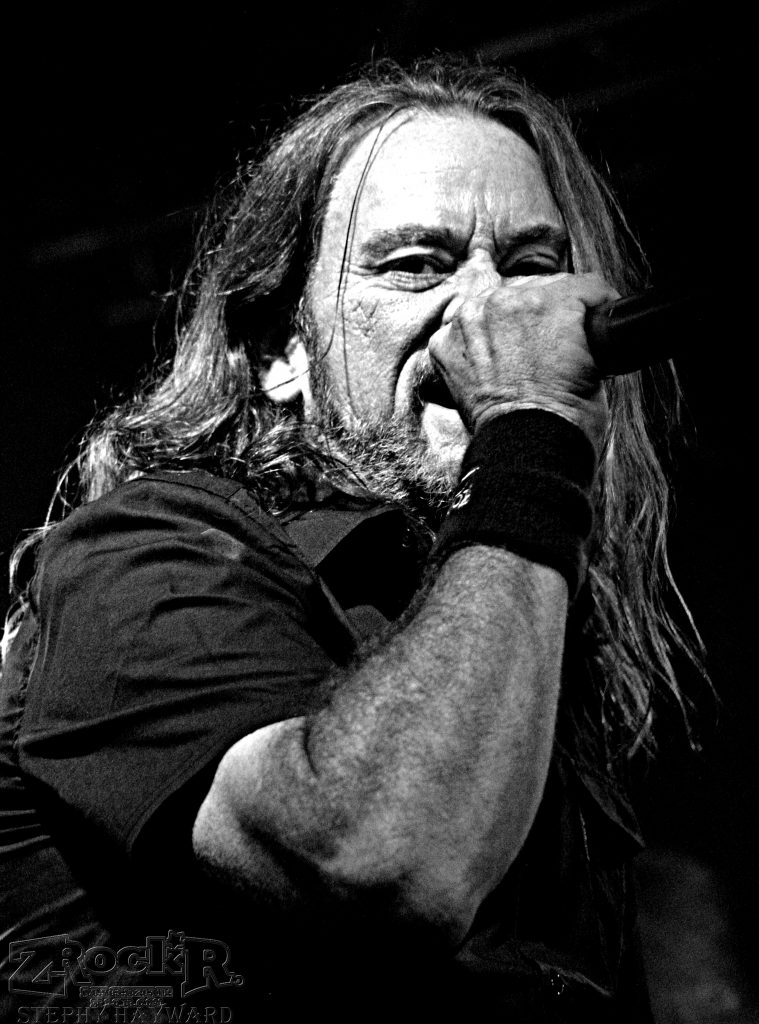 member left is lead vocalist Eric A. ‘A.K.’ Knutson.
Boasting an impressive twelve studio album catalog, while weathering the ups and downs of musical trends since their debut in 1986, credit must be given to “A.K.” for keeping on regardless of F&J never attaining the major success of a handful of their peers. Regardless of being a faithful fan of thrash or not, the musicianship of their twin lead guitarists and drummer especially can’t be denied; precision chops, flurries of notes. Having their ex-drummer, Craig, guest on one song was a nice touch.
These guys played a lengthy 16 song set which saw them dig deep into their catalog, Opening with the new “Seventh Seal” (not a Van Halen cover), they pummeled the fans with punishing metal, including three tracks off of their debut, Doomsday for the Deceiver, new track “Iron Maiden” (also not a cover by the obvious band it references), among others, undoubtedly pleasing the throng of fans peppering the crowd wearing the act’s t-shirts.
All in all, although not my cup of tea neither in look nor sound, a loud, angsty, super macho-type, facial haired-night it certainly was. If you were an underground metalhead you were probably here and perhaps have seen them multiple times over the years. As for me? See Flotsam and Jetsam once in my life: Check!