In 2014, KISS became the latest in a long line of hard rock and heavy metal artists to play a residency at The Joint inside the Hard Rock Hotel and Casino in Las Vegas. For fans of the legendary makeup clad quartet, this was one of the biggest and most exciting events to hit Sin City in years. As someone who has resided in Vegas my whole life, I was awed to hear of the band coming to town, and had the luxury of catching one of the shows. Nearly two years later, we are getting a CD/Blu-ray Disc release of one of the shows from Eagle Rock.

The aptly titled KISS Rocks Vegas features one of the concerts during the November 2014 residency (the packaging, from what I can tell, does not state exactly WHICH night's show it was). KISS brought with them a setlist spanning their entire career, from their 1974 debut record right up to 2012’s Monster. Gene Simmons and Paul Stanley are still the centerpieces of the band, and as they have been for the past decade plus, they are accompanied by guitarist Tommy Thayer and drummer Eric Singer (Ace Frehley and Peter Criss reunited with the band briefly in the 90s and early 2000s, but have since further pursued solo careers).

The setlist for the main concert, which runs roughly 90 minutes, is as follows:

The accompanying CD includes an edited version of the same concert featured on the Blu-ray Disc.

In addition to the main feature, the Blu-ray Disc also includes a bonus acoustic performance (featuring the band out of makeup!) This roughly 25 minute set is comprised of the following songs:

For the main concert on this disc, it is safe to say that the men of KISS have pulled out all the stops and gone all out to give their fans a concert experience that they would never forget. Even if you did not get to attend one of the shows in person, this Blu-ray Disc gives you the next best thing. There are wild pyrotechnics on stage, and at different points in the show, Gene Simmons and Paul Stanley, in addition to their already impressive stage presence, use harnesses to be lifted into the air, across the arena! Totally would NOT have expected stage antics and theatrics like this from Stanley and Simmons at their age, but these guys have defied the odds on more than one occasion. KISS is one of the most universally appealing bands out there, and they make it known why throughout the duration of this concert. Even the crowd shots reveal wild KISS fanatics, many of whom are in full band member makeup. How many bands that started in the 70s remain this popular, appealing, and accessible? 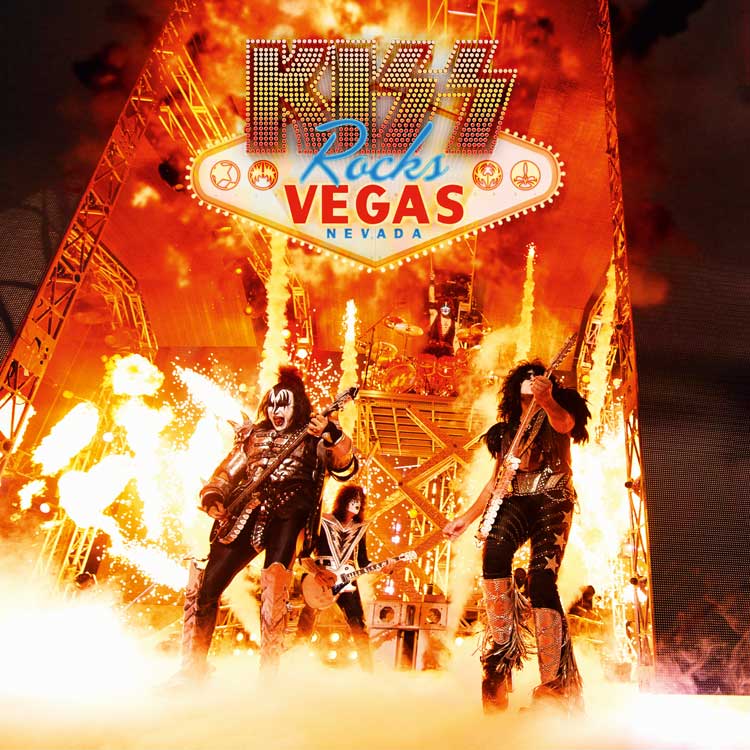 Even the setlist does not take all of the most obvious choices. Sure, we have the obligatory classics like “Detroit Rock City,” “Shout it Out Loud,” and “Rock and Roll All Night.” But the band does the fans one better, and gives the audience surprise cuts like “War Machine,” “Parasite,” and even “Black Diamond!” There are a few disappointing omissions, with “Strutter” and “Calling Dr. Love” being the biggest offenders, but I really do not think the fans are going to mind too much with this varied of a performance list.

The acoustic set, while much more brief than the main show, is equally satisfying, showing off a side of this band we seldom get to see. We see their diverse musical talents, as well as their sense of humor with the smaller, more intimate setting. This set is going to be getting every bit as much play time in my Blu-ray player as the main concert, and I am sure fans will be pleasantly surprised to see this side of the band as well.

The Blu-ray Disc has very satisfying audio and video quality, aside from a few soft shots and minor video anomalies here and there; most fans are going to be too busy rocking out to care. Sadly, there are no extras other than the acoustic set and a CD copy of the main concert; it would have been great to get interviews with the band, or even just hearing some of the fans at the shows sharing their thoughts on the band.

Overall, KISS Rocks Vegas is going to be a fantastic addition to any KISS kollection. This Blu-ray Disc comes highly recommended to all fans of the group. You wanted the best, you got the best!