It has been over a decade now since Australia’s Airbourne was unleashed on the world, and these Aussies are still going strong with their own brand of hard rock. With a scope of influence that harnesses classic Australian bands like Rose Tattoo, The Angels (AKA Angel City) and, of course, AC/DC, they have definitely made an impact on world audiences.

Breakin’ Outta Hell is the fourth studio album from Airbourne, and their first new effort since 2013’s Black Dog Barking. The group is still comprised of brothers Joel and Ryan O’Keeffe, David Roads, and Justin Street, who recorded the prior three records. 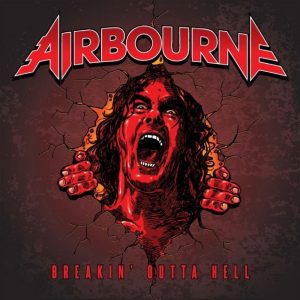 Are you looking for a progressive rock masterpiece that requires you to think about its subject matter as you contemplate the meaning of life altogether? If that is what you seek in an album, Breakin’ Outta Hell is certainly NOT the album for you. But if you are like me and get a high from mindless, debauched hard rock devoid of any deeper meaning whatsoever, what are you waiting for? Airbourne has not changed much since their first album, but for those people that fancy AC/DC-esque classic-style hard rock, that is quite all right! The riffs, the attitude, the songs; if you are at all familiar with Airbourne already, you more or less know what you are getting here. Their “back to basics” rock and roll style has proven a hit with audiences around the globe, and much like AC/DC before them, they do not need to change things too drastically, knowing they have a formula that works. This is evident in every single track on the album.

Breakin’ Outta Hell is every bit what you would expect from an Airbourne record. If you are already a fan of these Aussies and their brand of rock and roll, the release makes a fine addition to your collection. If you are not a fan and did not like their last few albums, then needless to say, this one is not going to change your mind. But as someone who fancies the group’s approach to making music, I can certainly give this one a recommendation.

Herman Frank - Accept Axeman is Back ...