Home›Movie Reviews›Frankenstein and Bride of Frankenstein - A Look Back at Two Classic Films Starring This Iconic Monster!

Frankenstein and Bride of Frankenstein - A Look Back at Two Classic Films Starring This Iconic Monster!

DISCLAIMER: This review contains spoilers for Frankenstein and Bride of Frankenstein, as it is impossible to discuss the latter without full knowledge of the ending of the former (though the films are so well known at this point it is unlikely anyone reading this does not already know the stories). Read at your own risk.

Universal made many classic films in the 1930s and 1940s, but few were as iconic as those starring Frankenstein’s Monster, portrayed by Boris Karloff in the earliest (and best) movies. With the Halloween season upon us, it is a fine time to look back at 1931’s Frankenstein, the film that launched this legendary creature’s appearance in films, and its immediate sequel, 1935’s Bride of Frankenstein. 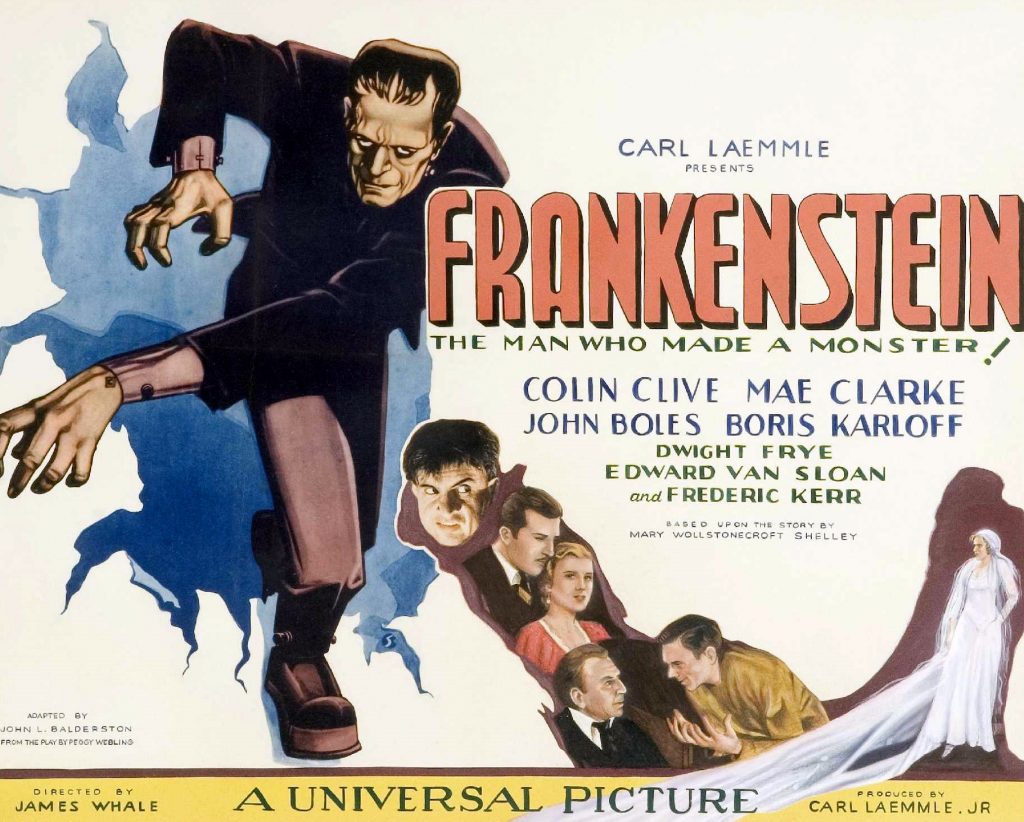 Frankenstein was the first film in Universal's classic Frankenstein franchise, based upon a stage play adapted from Mary Shelley's classic novel.

In 1931’s Frankenstein, scientist Henry Frankenstein has set about on an obsessive quest to be able to recreate life, combining parts of deceased bodies. His actions have alienated him from his bride to be, as well as his friends and family, including his father, Baron Frankenstein. Along with his assistant Fritz, Frankenstein succeeds in bringing a creature to life, but its actions set the nearby surroundings into a panic when the confused monster is responsible for a number of deaths. Dr. Frankenstein must put his wedding plans on hold, uniting with the with frightened townspeople to prevent the creature from doing any further harm. 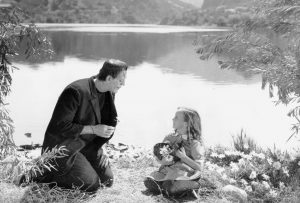 Though the monster is considered villainous, there are scenes that will have the viewer questioning this. The above is a prime example.

Though not the first filmed version of the Mary Shelley tale (a short film based on the story was put out by Edison Studios in 1910), it is by far the most successful and popular. Boris Karloff stars here in the role that made him a legend in the acting world, and gives a performance for the ages, bringing the monster to life in more ways than one. A strong supporting cast, memorable setpieces, and an ominous mood throughout have made this one a classic for the ages. 85 years later, it still stands as one of the great achievements in horror cinema. Picking a favorite movie from the Universal Classic Monsters series is no easy task, but this is definitely near the top of the list. 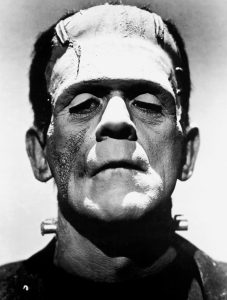 In these films, Boris Karloff became the most famous and well remembered incarnation of Frankenstein's Monster.

The move only clocks in at around 70 minutes, which while short by modern standards, ensures brisk pacing and adequate character development. The spoken word prologue from Edward Van Sloan (who also appears in the film as Henry’s former university professor) does a great job setting the scene, and once the movie is done, you will never forget what you have seen. The Frankenstein mythos was forever changed and enhanced by this film; things like the creature’s signature flat head and electrode bolts in the neck, as well as electricity being used to bring the monster to life, all originated here, and have become a part of the story as well known as anything from the original Shelley novel. Much like Dracula, released by Universal early in 1931, this movie is based upon a stage play adapted from the novel rather than the novel directly, with a few obvious liberties and changes made for the big screen.

Universal made plenty of other monster movies following this one, including several more in the Frankenstein series. But very few of them made the impact this one did. Many will argue this the finest film ever made starring Boris Karloff as the creature, and honestly, it is difficult to argue with that! A strongly recommended viewing. 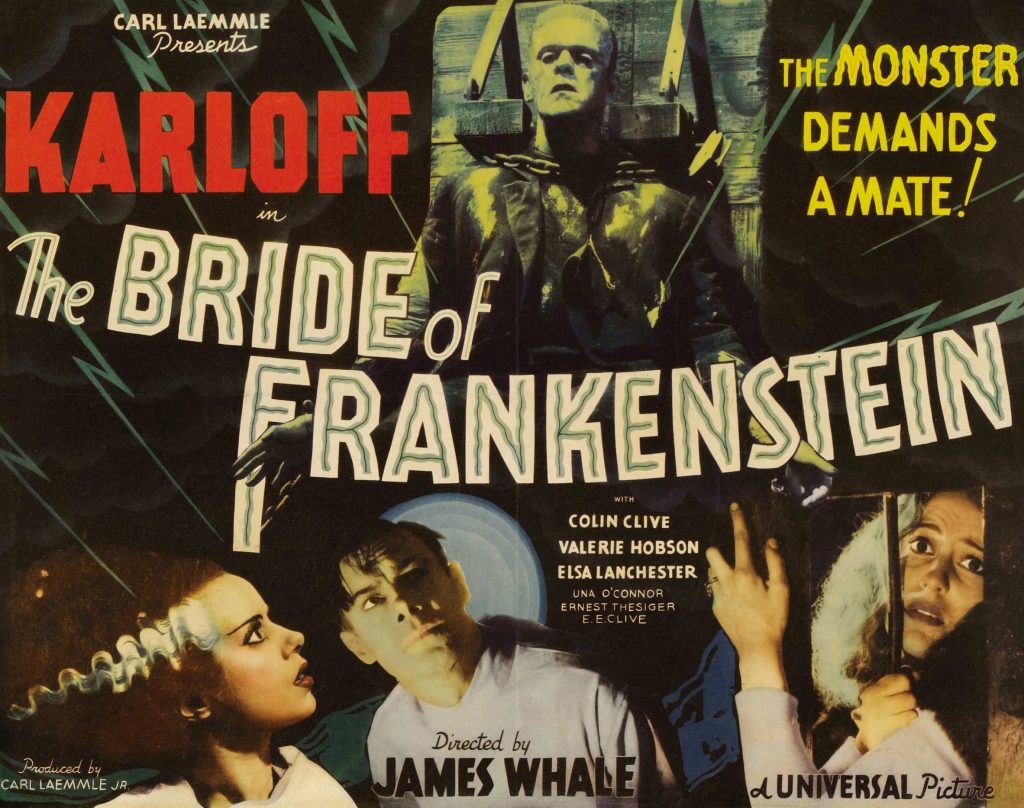 Bride of Frankenstein was released in 1935, and is the second film in Universal's classic Frankenstein series.

1935’s Bride of Frankenstein is a sequel to the first movie in the truest sense, it quite literally picks up where its predecessor left off. When we last left our cast, the creature was left burning to death in a windmill that had been set ablaze, with Henry Frankenstein narrowly getting away and surviving. But the monster survives the fire and is set loose on the world once more, evolving as he interacts with growing numbers of people along the way. A bedridden Henry is visited by another former university professor, Dr. Pretorius, who blackmails Henry into doing his bidding in exchange for the safety of his wife to be, and his name not being revealed as the creator of the deadly creature wreaking havoc on the town and the countryside. Forced into an uneasy alliance to keep his secrets hidden, he begins working around the clock on a new creation… a bride for his previous monster!

Making a sequel to a classic film is never an easy task. Director James Whale returned to helm Frankenstein’s sequel, which he had initially not had any desire to do. But he, the cast, and the production team succeed beautifully here. Bride of Frankenstein is that rare sequel that is not only as good as its predecessor, but may very well even be a better film! 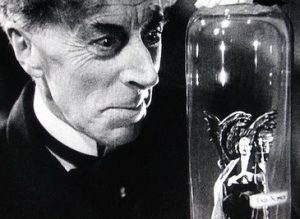 The key players from the previous film return here, including Colin Clive as Henry Frankenstein, and of course, Boris Karloff as the monster (credited as simply “Karloff.”) By far the stand out amongst new cast members for the second film is Ernest Thesiger as Dr. Pretorius, a truly devious villain who is not above hiring convicts for common labor and blackmailing Henry. All the while he has been conducting his own experiments in attempts to create life, but he requires Henry’s hand to take things to the next level. The monster gets plenty to do, in both a good and a bad light, but Pretorius is the real villain here, and arguably the best part of the film.

Another major strong point of the sequel is it actually takes the time to develop the monster. In the first film, aside from a few moments here and there, we mostly saw the monster as a malicious, albeit misunderstood creature. More scenes are taken to focus on the creature’s development throughout the movie, including a fantastic sequence in which he befriends a blind hermit. He even develops a limited vocabulary (something Karloff was opposed to, yet handles well). 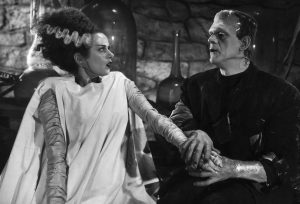 The Bride appears on screen for very little time, but her appearance has become iconic over the years nonetheless!

The one somewhat disappointing aspect of the film is, ironically, the titular bride. Not because the portrayal is weak; it is an iconic appearance that stands the test of time. But rather the fact that the Bride of Frankenstein is barely present in her own movie! The character only appears in the final five minutes, and her construction feels mostly like a subplot, introduced fairly late in the movie. The movie may as well have been called Frankenstein II instead. But this is hardly a flaw.

Bride of Frankenstein is a great sequel to one of horror’s all-time greatest movies, and it may very well surpass the original. Fans of the films are bound to have split opinions here, but this is a fantastic follow up that is absolutely worth seeing. You will not be disappointed!

Universal’s Frankenstein films were not limited to these two films, although they are certainly the best known and most positively reviewed. Follow-up movies over the following decade released by Universal, including crossovers, were Son of Frankenstein (the last film to feature Boris Karloff as the monster), The Ghost of Frankenstein, Frankenstein Meets the Wolf Man, House of Frankenstein, House of Dracula, and the comedy Abbott and Costello Meet Frankenstein. In later movies, the monster was played in actors including Glenn Strange, Bela Lugosi, and Lon Cheney, Jr. (many of whom had previously appeared as other monsters in prior Universal films).

The Frankenstein monster would continue to appear in other later adaptations put out by other studios, including Hammer, as well as comedies/parodies, the most noteworthy of which being Young Frankenstein from director Mel Brooks. Other directors/actors/etc. have had their own takes on the material, many of which have sharply deviated from Mary Shelley’s original novel, or expanded on it in other ways.

If you are looking to acquire Frankenstein and Bride of Frankenstein on Blu-ray Disc, both films are available in the Universal Classic Monsters Collection, alongside other films such as Dracula, The Mummy, The Wolf Man, The Invisible Man, the 1940s version of The Phantom of the Opera, and The Creature from the Black Lagoon. There is also a Frankenstein “Legacy Edition” set out that has the first two films plus the aforementioned Frankenstein films as well. Both films are also available as standalone Blu-ray Discs.

Frankenstein and Bride of Frankenstein both represent not only the high water mark amongst the Universal Classic Monsters film series; they are easily the finest films created starring this legendary monster. If you are at all a fan of classic horror/monster films, these ones belong in your collection.

All images/video content seen in this review are the property of Universal Studios, the Estate of Mary Shelley, and and and all other associated entities. For promotional purposes only. All rights reserved.

Herman Frank - Accept Axeman is Back ...

Stryper and Todd Kerns - The Yellow ...