Home›Reviews›The Park Theater Opens With The Gypsy Witch Herself- The Incomparable Stevie Nicks- What A Magickal Evening It Was!

The Park Theater Opens With The Gypsy Witch Herself- The Incomparable Stevie Nicks- What A Magickal Evening It Was!

What can you possibly say about a legendary singer who since the 70's has been described as magickal and enchanting and dubbed music's own gypsy witch?  She has been a force to be reckoned with over the decades- weaving her spell over her audience with songs that give a glimpse into her life, somewhat ( but not too much) and can get you up and dancing or weeping like a baby....

On December 17, 2016-  Stevie Nicks, her long time guitarist Waddy Wachtel in tow, opened up and proceeded to enchant the audience at The Park Theater with her "Songs from the Vault" and while some may have been disappointed that some of the "classics" that we have come to love were not done, she made it clear that the evening was not going to be run of the mill with what she has chosen to share with us that evening.

Before I go on further about Stevie,  I would like to give a nod to Chrissie Hynde and The Pretenders who were in the opening slot on this bill.  If anyone questions if Chrissie still has it- if Martin can still play- and if the sass and playfulness is still there with her during "Brass in Pocket" - I can assure you, it is indeed! The hits were there and the band was on point as they went thru songs like "Don't Get Me Wrong" and "My City Was Gone".   The coarse yet wistful way Chrissie has always sang "Mystery Acheivement" still as great as when it first came out and the crowd could not have been more receptive, dancing and singing along to those songs.  The only thing I was disappointed about was that Chrissie didn't pull out " Tattooed Love Boys" - always a kick ass tune!  If you ever question yourself as to if you should catch The Pretenders when they come to your town- question no further and get out of the middle of the road and just GO- you will NOT be disappointed! 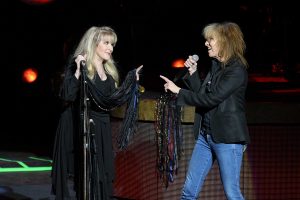 When it comes to Stevie, someone who I have admired since I was a kid ( and in fact named my daughter after),  her part of the evening was very much all one could hope for and more.  To hear the stories behind the songs that she has chosen to pull out of the trunk in her vault- some songs, like "Gypsy" and "Stand Back" and "Gold Dust Woman" that are what can only be called "standards" to any Stevie fan and some that were not so familiar- but all phenomenal.  There were tender moments that brought tears such as when she talked about Prince and how Edge of Seventeen came about as well as some funny moments when she had to "scold" someone in the audience who kept shouting at her when she was introducing Waddy Wachtel and talking about how he has been her musical director since Bella Donna days.  There was the story of how Stop Draggin My Heart Around came about and while we wondered if Tom Petty was hiding backstage ( hey it IS Vegas and things like that do happen at times!) we were all surprised to hear Mr Petty's parts being done and done amazingly,  by none other than Chrissie Hynde who came from behind the drum riser to join Stevie on stage!  The whole evening was, as described previously, a very magickal and very enchanted evening...

Stevie closed the show with just she and Waddy onstage doing the song " Landslide"  which she dedicated to the owners and management of The Park Theater as she thanked them for allowing her to be the opener of the new and most beautiful venue that is now at the Monte Carlo Hotel and Casino on The Strip in Las Vegas, as well as her audience,  who came together for the type of night that only Stevie can weave.  We can only hope that she will return again soon, to cast her own brand of musical magick over Las Vegas once again.

Stevie Nicks Promotional Photos - All Rights Reserved by the artist