Night Ranger was one of the most iconic bands of the 1980s, with classic cuts like “Sister Christian,” “Sing Me Away,” “When You Close Your Eyes,” “Sentimental Street,” “Don’t Tell Me You Love Me,” and “(You Can Still) Rock in America.” Although classic members Jeff Watson and Alan Fitzgerald have since parted ways with the group, classic members Kelly Keagy, Brad Gillis, and Jack Blades have joined forces with the equally talented and proficient Eric Levy and Keri Kelli.

Don’t Let Up is slated for release by Frontiers Records on March 24, 2017, and is the latest release from the quintet. While a good many bands are content to call it good and capitalize on the same old hits forever, Night Ranger certainly shows no signs of letting up, recorded consistently over the years, and having roughly a dozen studio albums to their name. But can the Night Ranger boys still deliver?

An aging band always faces a struggle. Do they attempt to modernize and cash in on modern rock trends, or do they try to copy the glory days and keep those old sounds alive? The ideal situation for one of these bands is to find a balance between the two, which is not always easy. Fortunately, as they prove on Don’t Let Up, Night Ranger has it down. 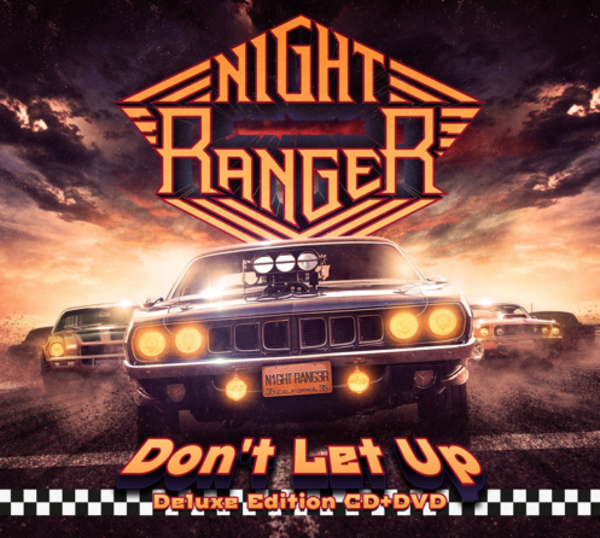 The results on the new album speak for themselves. The band clearly are not nostalgia hounds that are clinging for desperate, dear life to their hits of yesteryear; the group modernizes in fine form, creating songs that would not be out of place on modern rock radio, yet at the heart of it all, this is still the same band that debuted with Dawn Patrol way back in 1982. There are slower cuts, power pop songs, bluesy rockers, and even cuts that would not have been out of place on something like a Foo Fighters record. This powerful musical diversity shows throughout the record’s duration; Night Ranger is still going strong, and has given us one of 2017’s best releases so far.

If you are a Night Ranger fan that wonders whatever happened to the band, here is your answer. They are still going strong and recording kick-ass rock and roll. A strong and diverse release, Don’t Let Go comes highly recommended. Be sure to add it to your collection when it streets on March 24.