Home›Reviews›Empire's End: The Third and Final Book in the Star Wars Aftermath Trilogy!

Empire's End: The Third and Final Book in the Star Wars Aftermath Trilogy!

Aftermath: Empire’s End is the third and final book in the Aftermath Trilogy, set in the months that follow Return of the Jedi. With the Empire on the run and backed into a corner, the New Republic is becoming the Galaxy’s new governing body. But Imperial holdouts have assembled their forces on the wasteland world of Jakku, with one last contingency plan to strike back at their enemies. As our heroes struggle with threats, both political and deadly, taking actions against the last remnants of the Galactic Empire is debated. But will the Empire be able to defeat the fledgling New Republic, or are they doomed to fail?

Aftermath: Empire’s End is the final book in Chuck Wendig’s Aftermath Trilogy, and it is certainly the most satisfying of the three. Story arcs and characters introduced in the first tale come full circle here, and while there are still a few too many subplots and some story arcs that end in a rather predictable manner, overall the third and final book here is more than satisfying. Star Wars fans will be satisfied seeing old and new heroes alike, and how they have progressed. 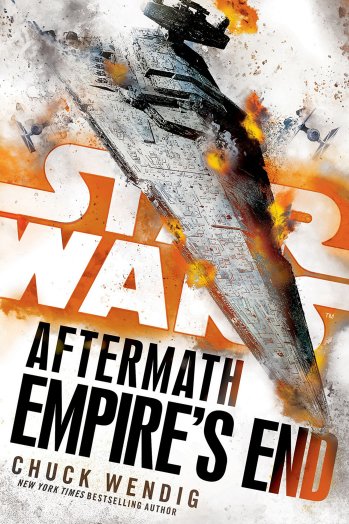 A good many people have bashed Wendig for his eccentric “present tense” writing style. While I admit it is something of a turn-off, once you get engrossed in the story, you really tend not to notice. Honestly, as a whole, he has done a very good job advancing the post-Return of the Jedi Star Wars galaxy, and introducing characters that fans will certainly hope to see in future Expanded Universe media.

When I started reading the first book in this trilogy, I did not expect to see any of these characters that were introduced have a lasting presence. However, I am happy to say, that with very few exceptions, I found myself rooting for these new heroes and wanting to see more of them. Even a number of the new villains come off as quite interesting in the grand scheme of things. Wendig definitely manages to create characters that should be around in the Star Wars universe and future media for years to come. The ending, while a few facets of it seem predictable, is very satisfying overall.

Aftermath: Empire’s End ends the Aftermath Trilogy in fine form. This is the conclusion to this saga that Star Wars fans have been waiting for. A highly recommended read, but read the other two books first.

This book follows the release of Aftermath and Aftermath: Life Debt. Click on the titles to the respective books here to see reviews for them.