In 1976 the punk rock scene of London is on the cusp of exploding and during this time Brian James and drummer Rat Scabies would decide to form a new band, they would go on to invite both Dave Vanian and Sid Vicious to audition as the group’s singer the choice would be made easy for them as Vicious would neglect even showing up. Captain Sensible would round out the original line-up on bass and forming THE DAMNED. 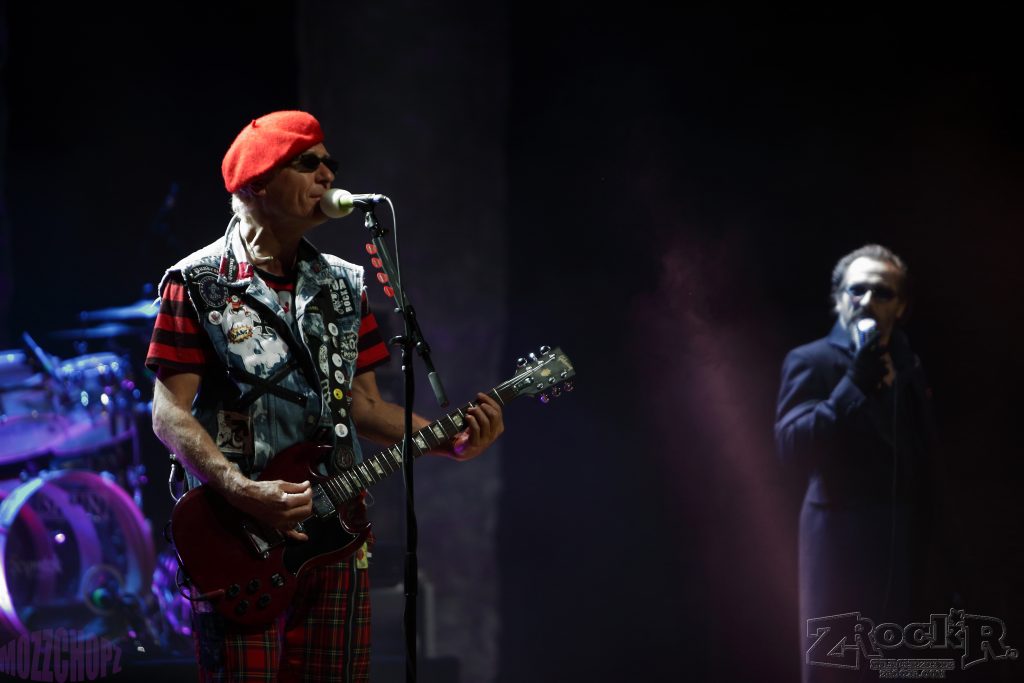 THE DAMNED were an important piece to the U.K. punk scene even early on and are well known today to have beat their contemporaries to the punch on several occasions. The first band to release their first single “New Rose” five weeks before THE SEX PISTOLS’ “Anarchy in the U.K.”, they were also the first to release a full-length album Damned Damned Damned (1977), as well as the first to tour the United States.

Now they are here once again, this time celebrating their 40th Anniversary being supported at the Las Vegas stop by both BLEACHED and DAMNATION.

I’m sorry to say that I’m going to complain a bit about DAMNATION. If you’re from the band I’m sorry, but your website is shit. You’re fighting an uphill battle already considering you share your name with numerous punk and metal bands. A ridiculous amount to be sure. So finding information about your band is a pain but the website that unless memory fails me would have been just barely passable even in 2002. In fact the only way I can be sure that it was the same band was a quick peak of your discography section showed the artwork of your 2002 album The Unholy Sounds of 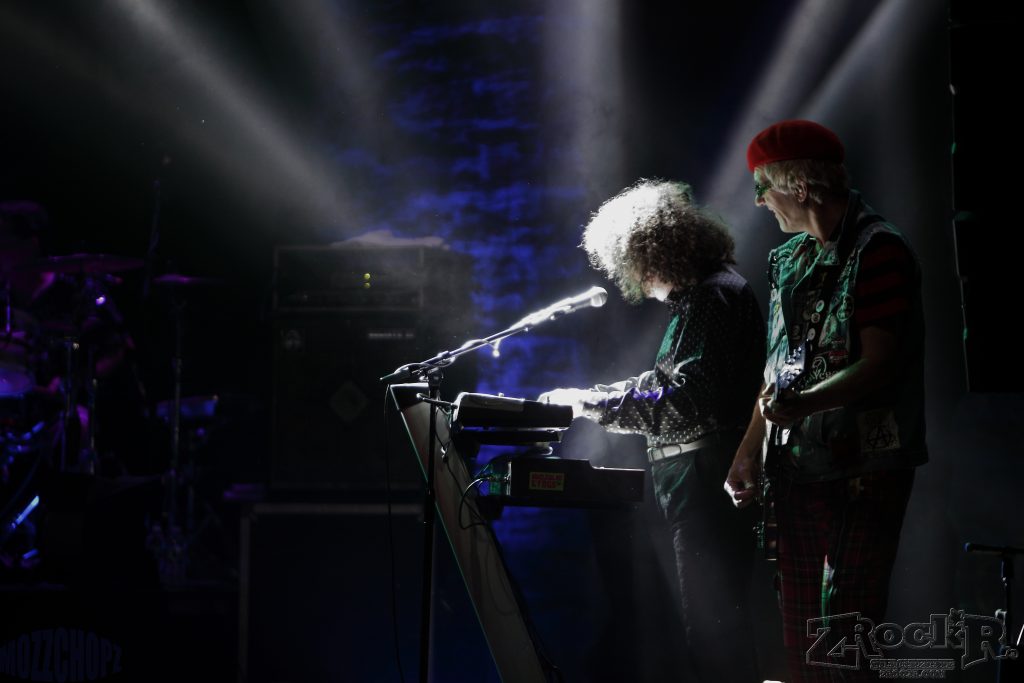 DAMNATION matched the backdrops from your live show. With that out of the way, the only other complaint I have is the lack of releases since 2002.

I immediately have some idea of what I’m in for when the intro tape rolls and I’m getting images of classic horror movies and memories of ten years ago listening to the MISFITS’ American Psycho intro “Abominable Dr. Phibes” for the first time.

DAMNATION’s horror punk feels scratch an itch I didn’t know I was feeling. Their singer even has a voice reminiscent of the legendary Glenn Danzig without seeming to being either a exact or cheap copy. In addition I’m hearing bits of Sabbath style riffs in songs such as “All Hallow’s Evil”.

For an example of musical and technical prowess of the lead guitarist, see “Pin The Tail” where the skull ski mask wearing axeman throws in some finger tapping into his solo that aren’t so out of place as you might think. 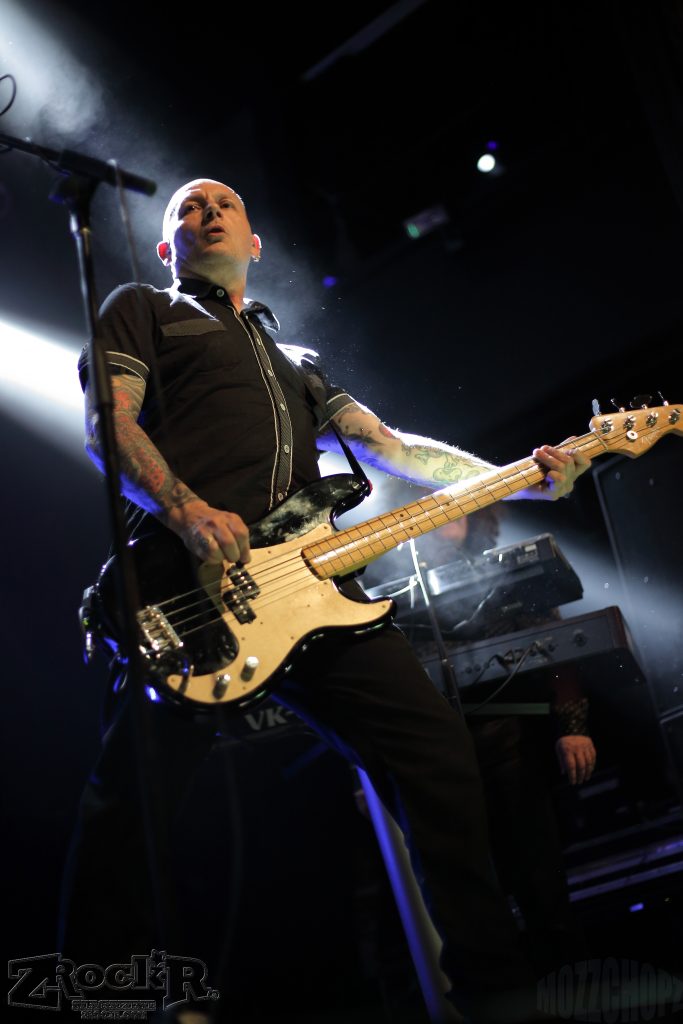 used to playing stages where they have room to breathe. Or at least that’s what I thought until Jennifer sets down her guitar and the other two ladies are singing less back up. These songs I felt were the highlight as they gave them the chance to perform more to the audience rather than being tethered to the mic stands.

If you find yourself interested in hearing BLEACHED for yourself check out their two studio albums Ride Your Heart (2013) and Welcome the Worms (2016).

When it’s time for the main attraction the lights all shine on keyboardist Monty Oxymoron who starts things off by showing off some classical chops that will remind you that the band was not only important to punk music but was also a huge inspiration to goth music and subculture.

Monty then leads into “Melody Lee” as the rest of the band takes the stage. Featuring Pinch on drums, Stu West on bass, former gravedigger and well-dressed goth pioneer Dave Vanian on lead vocals, and the eccentric Captain Sensible on guitars.

Dressed almost entirely in red Sensible’s antics ended up stealing the show. Entertaining the crowd with his banter, playing a solo with his SG behind his head, playing guitar laying on his back like a turtle, holding his mic stand upside down and pointed to the people in the front row as a way to invite the crowd to sing along to “Ignite”.

He even threw shade at the THE SEX PISTOLS at one point saying they had maybe three good songs. The audience certainly seemed to agree based on the applause. I’m not so sure about that myself.

Maybe one or two.

At the end of the night, I was glad to have been in attendance for each of these bands and I get to say that I’ve seen THE DAMNED live at least once. Did anyone else notice how that bra that was thrown on stage seemed to travel all over the damn place afterwards?

THE DAMNED have said in recent interviews that a new album will be in the works following the end of this tour so keep an ear out. 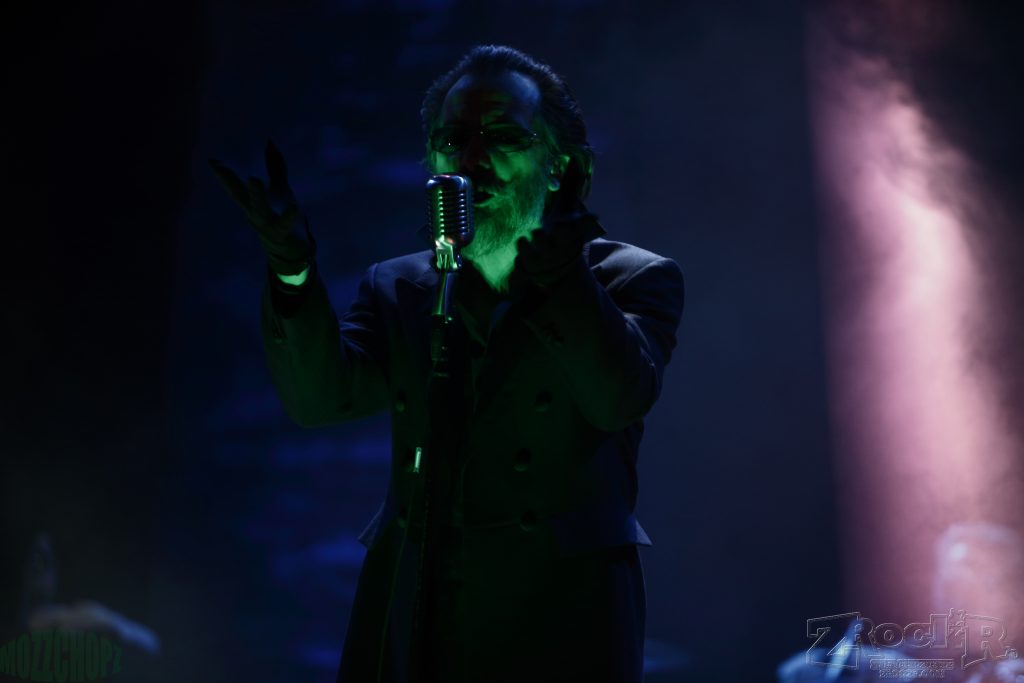 If you’re interested in more live punk music, PUNK ROCK BOWLING is coming to Las Vegas May 27th-29th featuring IGGY POP, BAD RELIGION, and PENNYWISE. As I’m writing this now I’m not privy of the specifics but you may be seeing coverage of the festival and related events here on ZRockR.

See the lineup and more at www.punkrockbowling.com

CONGRATS TO GEORGE AND PAMELA! THE ...