Home›Reviews›Raiding the Rock Vault - The Epic Rock and Roll Story Returns to Vegas at Vinyl!

Raiding the Rock Vault - The Epic Rock and Roll Story Returns to Vegas at Vinyl! 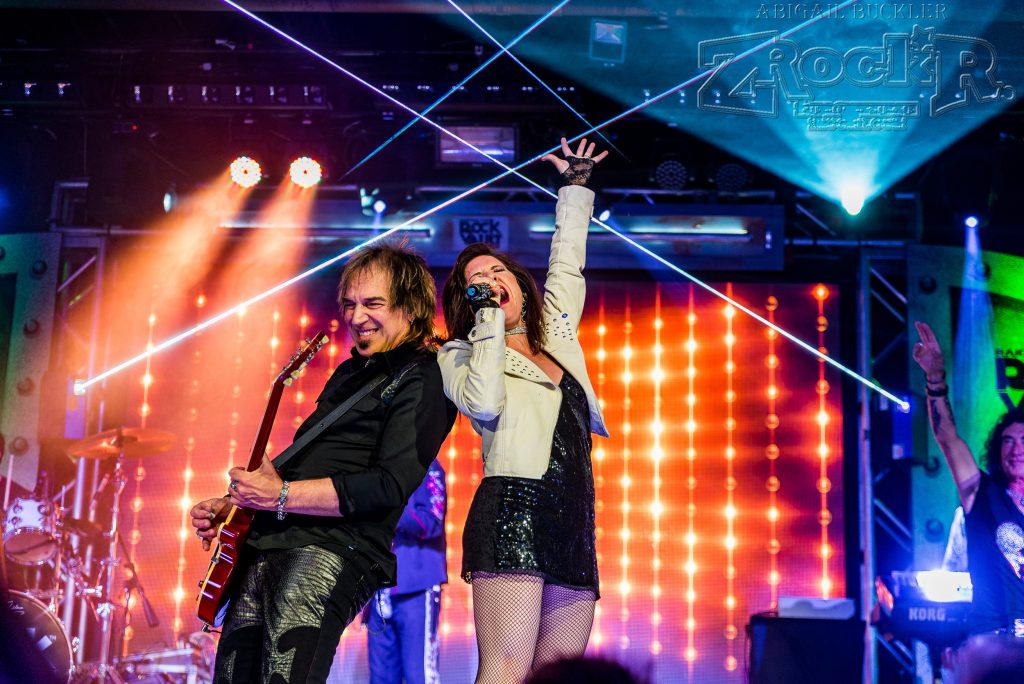 Raiding the Rock Vault has become a Las Vegas staple since it debuted in Sin City in 2013. The show brings together many personalities from the classic rock and hard rock worlds, paying homage to the greatest rock and roll songs and acts of all time, typically combined with a loose storyline. During its four years in Vegas, Rock Vault has won many Best of Las Vegas awards, and the respect of rock and roll fans that include locals and tourists alike.

The show has changed in a number of ways during its run, with the changes primarily being to the storyline accompanying the show, and with some light changes to personnel and tracks played. But, more on that later. 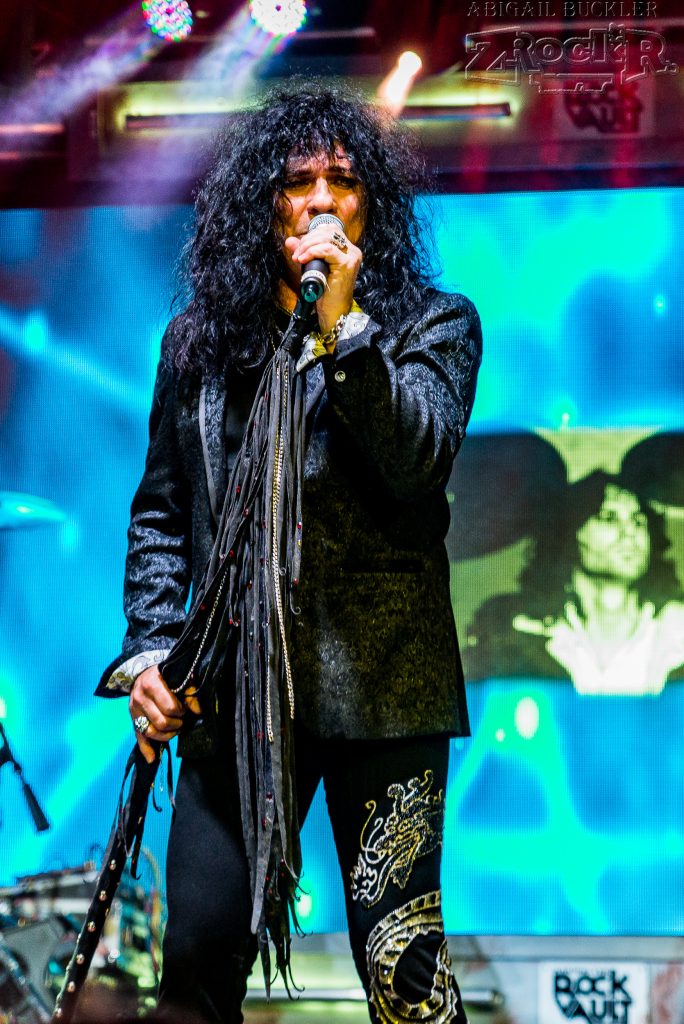 due to the departure of founding member/creator John Payne. The Payne-era show featured a storyline with actors revolving around a “Rock Vault” time capsule, long lost in a jungle that revealed decades of history of rock in the form of live performances/DJ booth scenes/music television scenes. The hurried “replacement” storyline for the remainder of that era of the run focused on roadie stories gone awry (I was unable to attend the show during its run at the Tropicana, so I can't comment on that era). All versions of the show featured video screens with info on the bands/songs/artists, and other appropriate imagery based on the song.

Fast forward to 2017. Following the end of the show’s run at the Tropicana, it was announced that Raiding the Rock Vault would continue at the Hard Rock Hotel and Casino, inside the Vinyl club/showroom. I was a bit surprised at this development, given that previous incarnations of the show were in large theaters, but Vinyl is considerably smaller than this. Personally, as a longtime fan of the original incarnation era of the show, I was eager to see how it would work out at Vinyl, or for that matter, if it would work out at all.

This is a tough review to write, because there is the issue of reviewing the show on its own merits, and compared to earlier incarnations of the show at larger venues.

But I am pleased to announce that, overall, the results are more than satisfactory.

The first thing one must mention when it comes to Raiding the Rock Vault, in any shape or form, is the sheer talent involved. These are some of the greatest musicians of their era, and seeing them united on stage in this environment is a sight to behold. Seeing them pay homage 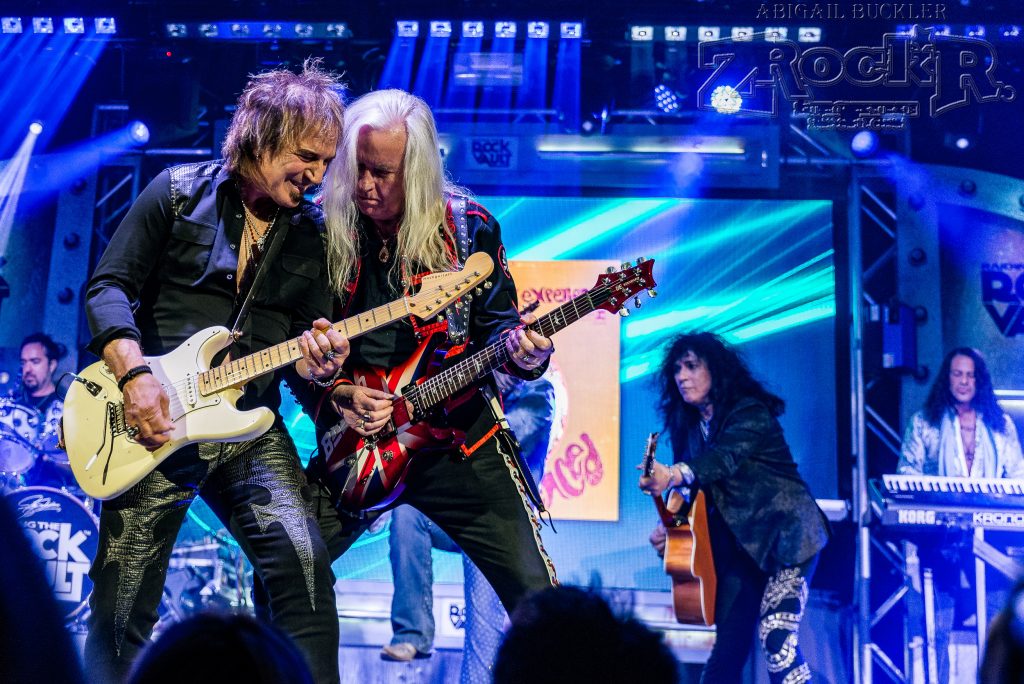 to their own rock and roll heroes, and music even into their own peak eras, will be a delight to any fan of classic rock. Each of these artists brings their A-game to the table, and all of them sound as good as ever. They perform superbly, and move around the stage with plenty of energy. You can tell this is a well-rehearsed tight-knit group from their stage chemistry and relaxed yet passionate demeanor. If you are a fan of classic rock, you will recognize these songs, and hear them done justice by an all-star band.

The setlist, for the most part, has generally stayed the same since the show started in Vegas in 2013, with a few minor adjustments. It covers an era of rock ranging from roughly 1965-1987, with the majority of the setlist comprised of individual tracks, but there are also two “medleys” combining portions of popular songs of the era. Tracks you will hear include “My Generation,” “Stairway to Heaven,” “We are the Champions,” and “Livin’ on a Prayer.”

There still is a “story,” although this has been downplayed considerably for the Vinyl version of the show in favor of the musical performances themselves. The story, shown on video screens, is from the point of view of “music” as a whole, detailing the history of eras and the music that they spawned. Two dancing girls are utilized throughout the performance as well. This “story” (if one can call it that) is closer to the original “time capsule” plot of the original 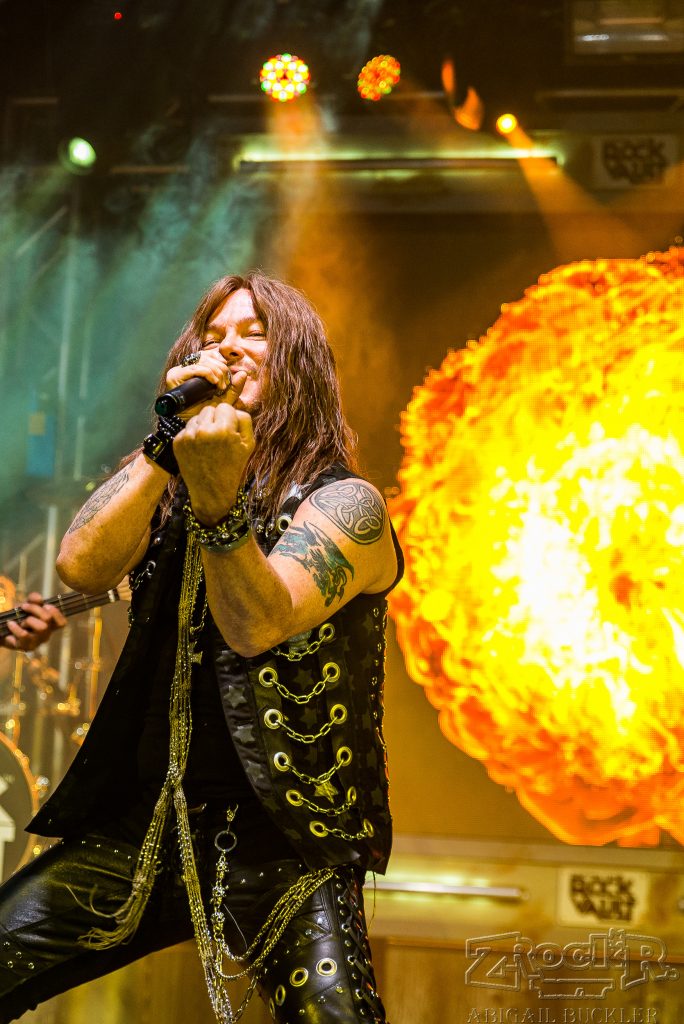 John Payne incarnation of the show, which is a welcome change. That said, I wish this element had been explored further, and utilized on more occasions. Video footage of similar scenarios to those acted out in the Payne version of the show would have been a nice touch, but I also respect the decision to focus more on the performances themselves.

Not surprisingly, there are some limitations to performing this show in a venue as small as Vinyl. We no longer get an elaborate “Rock Vault” prop that the musicians emerge/depart through. No fancy “jungle temple” set. No cast of actors. The stage does feel “cramped” at times, with a performer almost always blocking the words/footage on the video screen at the center of the stage; which could likely be circumvented with another smaller monitor higher up and farther forward. And while we're at it, PLEASE bring back the "roll call" at the beginning of the show that introduces the performers and reveals their prior bands/accomplishments!

And yet, this version of the show actually improves on some of the issues of earlier incarnation. Compressed, ugly looking video footage from the earlier versions of the show have been done away with and properly remade; the video clips airing during the songs now look considerably better than their past counterparts. The show generally feels “tighter” and better paced, running roughly 90 minutes. I’ll always miss the Nash Freeman and DJ storyline elements from the earlier incarnation of the show, but the band, cast and crew do the absolute best they can with this actor-less version of the show. More video footage to link the areas and flesh out the storyline/material would have been nice, but overall, the “tighter” 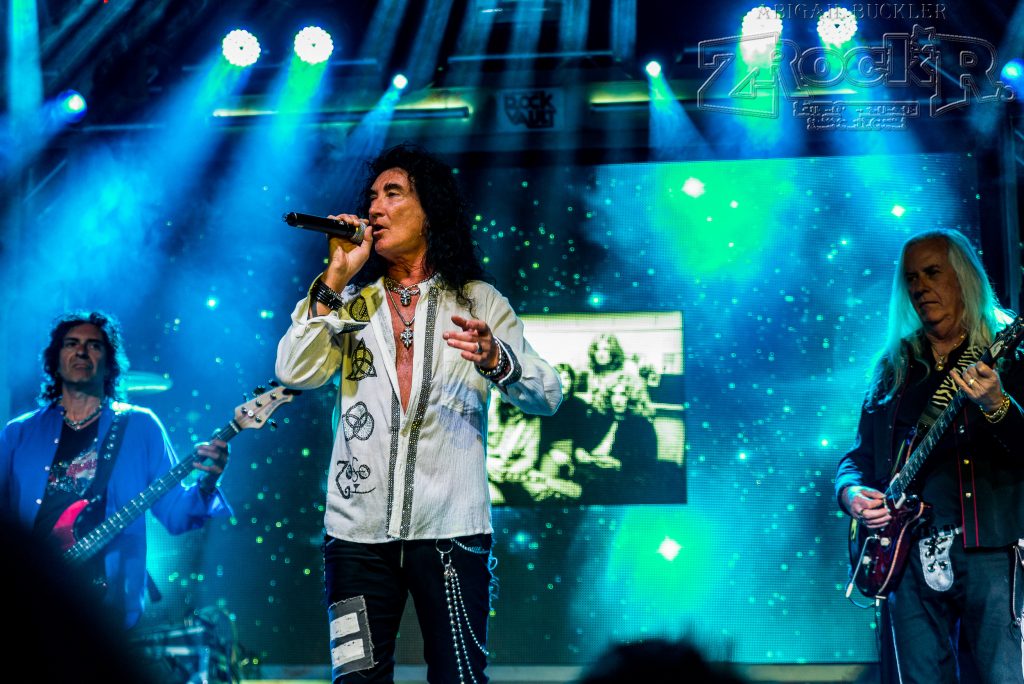 Some highlights from throughout the show include a powerful rendition of “All Along with Watchtower” complete with video footage of the Woodstock festival, an epic version of “Stairway to Heaven,” some surprisingly well-done female-fronted songs, and the fast-paced but full and fulfilling medleys of music spanning their eras.

Raiding the Rock Vault combines killer musicianship, a fun show, and a chance to relive some of your greatest rock and roll memories. And while there are minor issues here and there, they are ultimately outweighed by the talent and stage presence of unrivaled performers. If you live in Vegas or are visiting town, regardless of who you are, man, woman or child, you will find something to love about Raiding the Rock Vault.