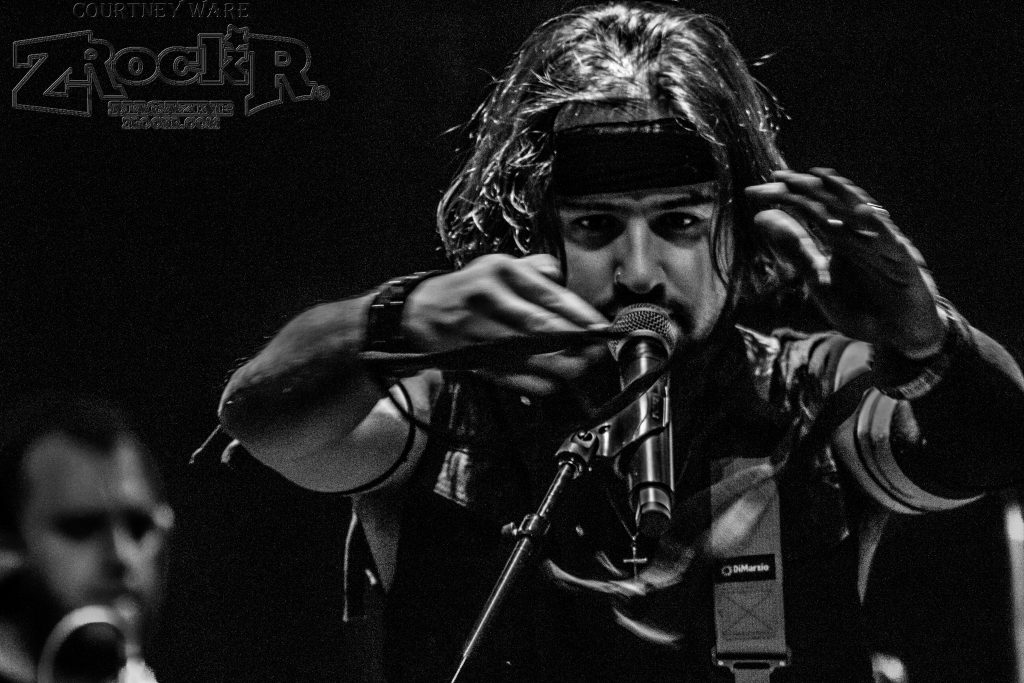 Going to the House of Blues to watch local metal bands…. Now that’s something I wouldn’t have thought I’d be doing ten years ago. I’d been to this place countless times to see some of my favorite bands since I was a teenager. Bands that include CANNIBAL CORPSE, THE BLACK DAHLIA MURDER, SLAYER, MEGADETH, OPETH, ARCH ENEMY, CHILDREN OF BODOM, GWAR, TRIVIUM, LAMB OF GOD, HATEBREED, and IN FLAMES, and a fair few more bands that I may be misremembering actually seeing at the H.O.B. in Chicago. My memory's kind of shit - Sorry.

Now, my relationship with the local metal scene was mostly from afar. Back in those days I was too young to see most of the bands live since they were mostly contained to the 21 and up bars and venues. So aside from seeing TAKING DAWN in the 7TH SON days as an opener at Jillian’s, sitting in on a BABILOS’ singer tryout, and visiting a band mate’s apartment he shared with members of AVENGER OF BLOOD - it goes without saying that I’ve fucking missed Vegas. 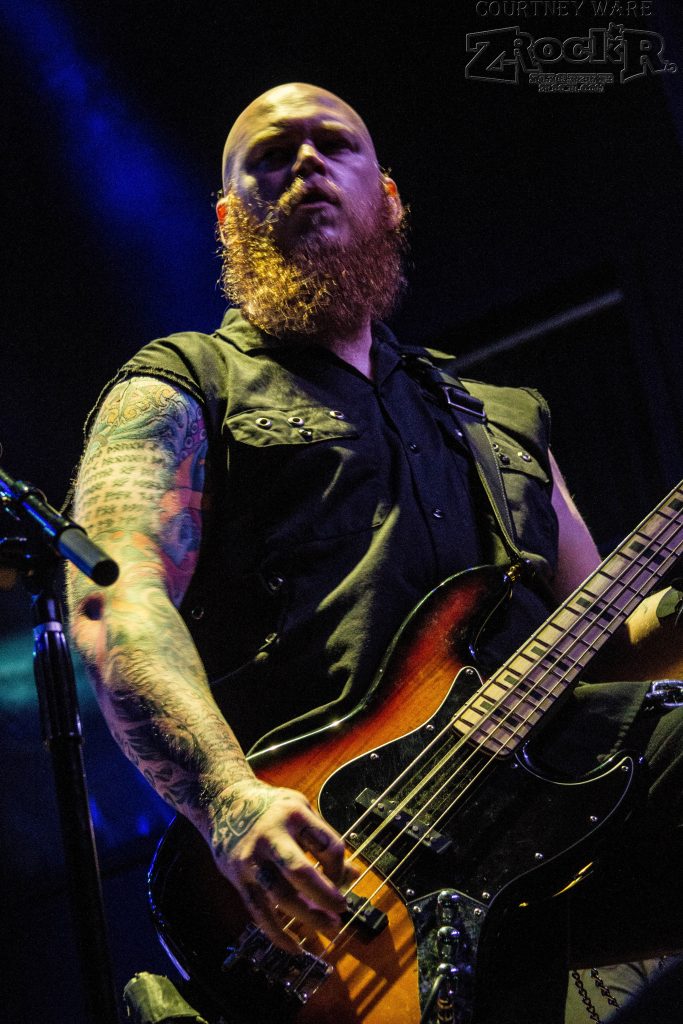 Our first band of the night are PILLARS OF CREATION, a band I’d be hard pressed to slot into any defined subgenre of metal. If you twist my arm and insist I pigeonhole them the best I could give you if that they are a mix of thrash, groove, death, and prog metal. Proggy post-thrash-death metal if you will. What a mouthful. It’s somewhat important to point out that this three piece act who formed in 2012 are a curiosity in that bassist Mathew Whaley shares lead vocal duties with drummer Bryan Walker. A drummer who is also a lead vocalist? The only two drummers that that sing more than a chorus here and there that immediately come to mind are Brann Dailor of MASTODON and Jürgen "Ventor" Reil of KREATOR. This band also does a killer cover of MEGADETH’s “This Was My Life”. My only criticism of guitarist Tom Madera is that at times he’s so focused on his playing he seems bored, however that said the guy is an excellent player.

You can purchase the tracks “Dead Inside”, “Eyes Upon”, “Together We Fall”, and “Deified” at cdbaby.com/Artist/PillarsofCreation

Meeting up with the guys from ASYLUM OF ASHES again, and after my first review with ZRockR (which you can read here) they were much happier to see me this time around. Still haven’t gotten around to getting a t-shirt though.

The second band of the night VATICAN FALLING are the second Las Vegas Deathcore band I’ve seen in Vegas, the first being the aforementioned PILLARS OF CREATION. If you’ve read that review you know that deathcore isn’t my favorite metal sub genre. That’s not to say that I’m not appreciative of the style, just that, well breakdowns can get a bit stale for my taste. That said I’m a sucker for simple yet standout melodic guitar lines and there are plenty to be had here. The band includes Adam Ray, the vocalist who wore a t-shirt with the slogan WORLD’S OKAYEST SINGER, not that singing is the same as guttural vocals, guitarists Dustin Allen and Marc Cula, Thomas Palmer, and Nick Robinson on the drum throne.

Want to check them out for yourself? I’m not sure where you can find a copy of their release Famine but you can preview a few songs of theirs here: www.reverbnation.com/vaticanfalling 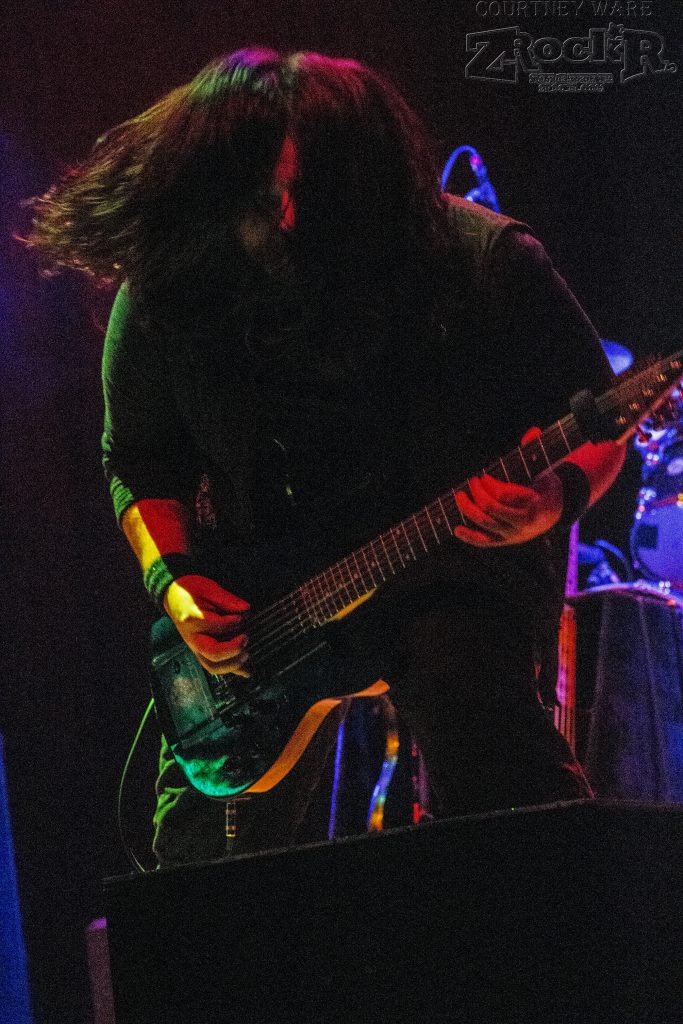 E.M.D.F. or long hand EMBRACE MY DARKEST FEAR is an industrial metal band with addition stylings of goth and pop that is easy to want to sing-along to. Featuring drummer Walter Martinez, guitarist Kiebert, bassist and back-up singer Patrick ‘Pulsar’ Trout, and lead singer Daniel Dazgic who also plays guitar and according to their Facebook page at least partially responsible for the pre-recorded keyboard parts. Aside from Pulsar breaking out into a rendition of SMASH MOUTH’s “All-Star”, he also had a quick talk about his own history with the House Of Blues that inspired the introduction to this review.

If this sounds like it could be your jam find the EP Some Scars Never Heal here: https://emdf.bandcamp.com/releases

MYNAS is a band that my photographer girlfriend talked up quite a bit when we knew we would going to this show. One of the bands I missed in my hiatus. I have to say it’s a damn shame that this is just the first time I’m seeing them. There is quite a lot of the melodic death metal sounds of AT THE GATES and IN FLAMES that I love so much in the music of MYNAS. In addition to the Scandinavian influences I hear quite a bit of James Hetfield in the vocals of Miles Lanham. Joined by lead guitarist Jeff Pritz, bassist Mark Bazar, and most recent member Mauricio Silva (Any relation to my brother-in-law?). MYNAS who formed in 2003 has recently released their first full-length album Fear The Slave.

Find the album, merch, and more information on the band at: www.mynasofficial.com

OPTICLEFT is a three piece technical death metal band who’s music immediately reminded me of the likes of NECROPHAGIST, ARSIS, and OBSCURA. The latter two especially since vocalist/guitarist Alex Fields has a voice that sounds like a mix of OBSCURA frontman Steffan Kummerer and James Malone of ARSIS and NECROMANCING THE STONE. Either that or I’m subconsciously plugging the Metal Blade 35th Anniversary Tour review again. He’s joined on stage with his two band mates bassist Robert Jarman and drummer Ryan Miller. Thank you guys for giving me the tech death metal of my teenage years that I so desperately needed these last few years.

You can purchase two OPTICLEFT tracks “The Golden Age” and “What Lies Beyond” with this link: https://opticleft.bandcamp.com 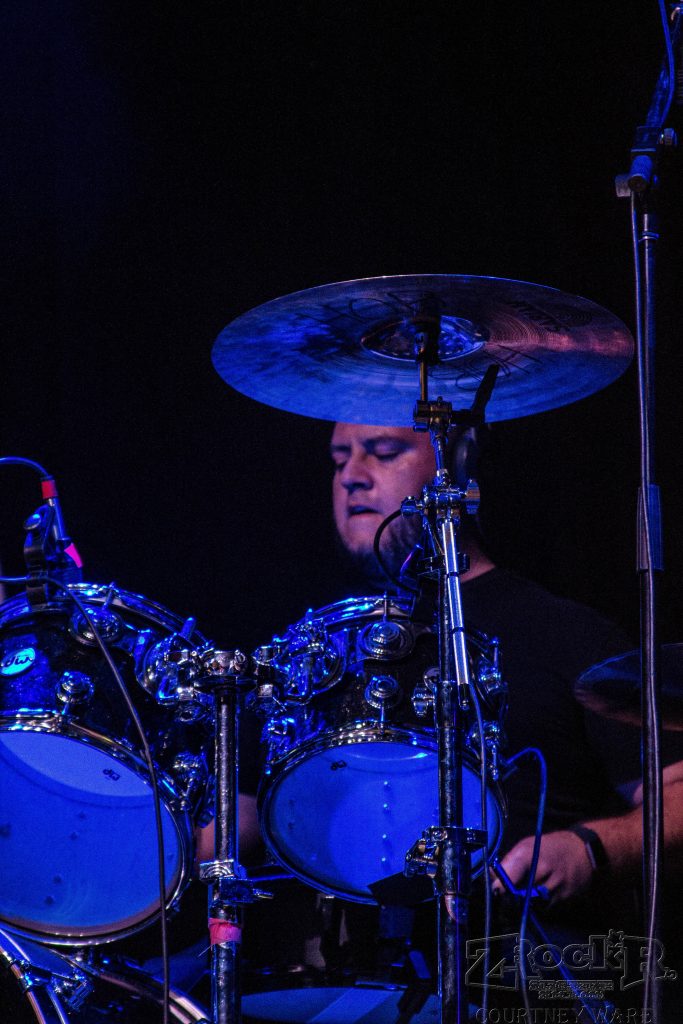 Just one last band before I let you go. By the time headliner SICOCIS goes on it’s late. Really late - As in ‘past my bedtime and I’m twenty-six fucking years old’ late. Okay, I was exaggerating a bit but who’s fucking idea was this?! Much of the crowd has called it quits and gone home ‘cause it’s a Thursday night so jobs and stuff, you know how it is. So because I’m not working a “real job” and these guys were the one’s who got us in the door - here I am. Dog-fucking-tired from being up all day but ready to hear some more music before it’s time to go home and straight to bed.

That is not a criticism of the band themselves mind you. Though there are fewer bodies the ones left based on the energy of the crowd are the die-hard SICOCIS fans or appreciate hearing even more good music. ‘Metalheads - from concentrate’ would be a good description of the people here to see SICOCIS.

SICOCIS is Ernie as lead singer and guitars, Travis bass and additional vocals, Rob on drums, and Rafael guitarist as well as being credited for the orchestration bits. This symphonic metal outfit has additional prog and melodic metal colors to their songs. Again if I have to compare the vocals to other acts I’d throw out COHEED AND CAMBRIA meets THREE with a harder edge to them. Musically it’s a tad more difficult… a faster KAMELOT meets one of my top favorite bands ARCH ENEMY, maybe?

The Arch Enemy comparison probably comes from the guitar harmonies as well as the differing style of playing solos. Michael Amott is to Ernie as Chris Amott is to Rafael. In several songs there were lead parts that the two guitarists would harmonize and I’m reminded of ARCH ENEMY’s “Dead Bury Their Dead”

However, I’m afraid that it’s not such a good idea to take the comparisons I’ve made to SICOCIS and other bands playing tonight at face value. SICOCIS claims a great many bands as influences on 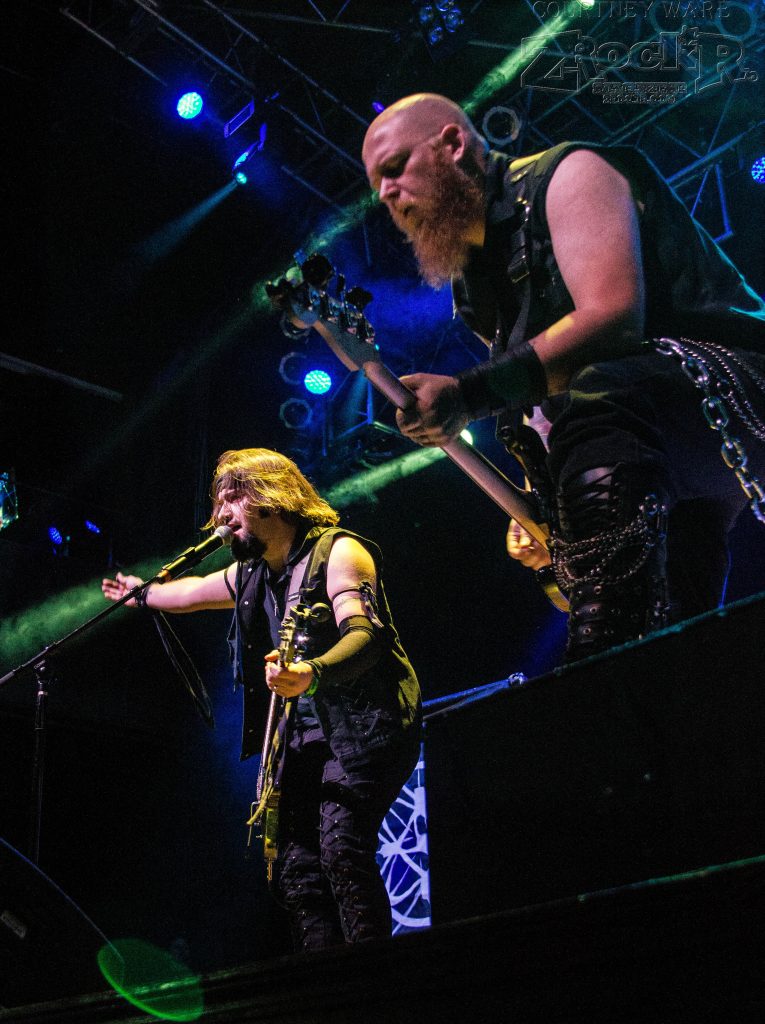 their Facebook page and I can hear little bits of many of them here and there and if I were to list them all I won’t get anything done. What’s important isn’t whether a band sounds like each and every artist they’ve listened to but how they take these previous ideas and morph them into their own musical identities.

(I feel safe with the ARCH ENEMY comparisons at least since they’ve posted a video of Rafael playing along with “War Eternal” on their YouTube page.)

Instead I’d like to take the time to point to moments such as when Travis would play his bass like he was really trying to do is do an extensive stress test on his strings, by beating them like a dead horse. Or that Ernie seemed to have to leave the front of the stage to switch out guitars. Is that why they all ended up behind him. These are the moments that stick in my mind and I’ve remembered years later from shows I’ve seen here at The House Of Blues and others.

This has apparently been the third time SICOCIS has played the House Of Blues, which just blows my mind. Is this a product of the work-ethic and hustle of Las Vegas metal bands or a change in how venues of this sort go about their business, or both? Kudos to whoever made this night happen. I’m tipping my figurative hat to you. I’m also excited by the prospects of the Las Vegas metal scene and you’ll be hearing more from me about these bands and others too.

Check out SICOCIS’ full-length album Requiem Of the World, out on M-Theory Audio, their website sicocis.net and their YouTube channel for the music videos for “We Shall Rise” and “Prelude to Insanity”. 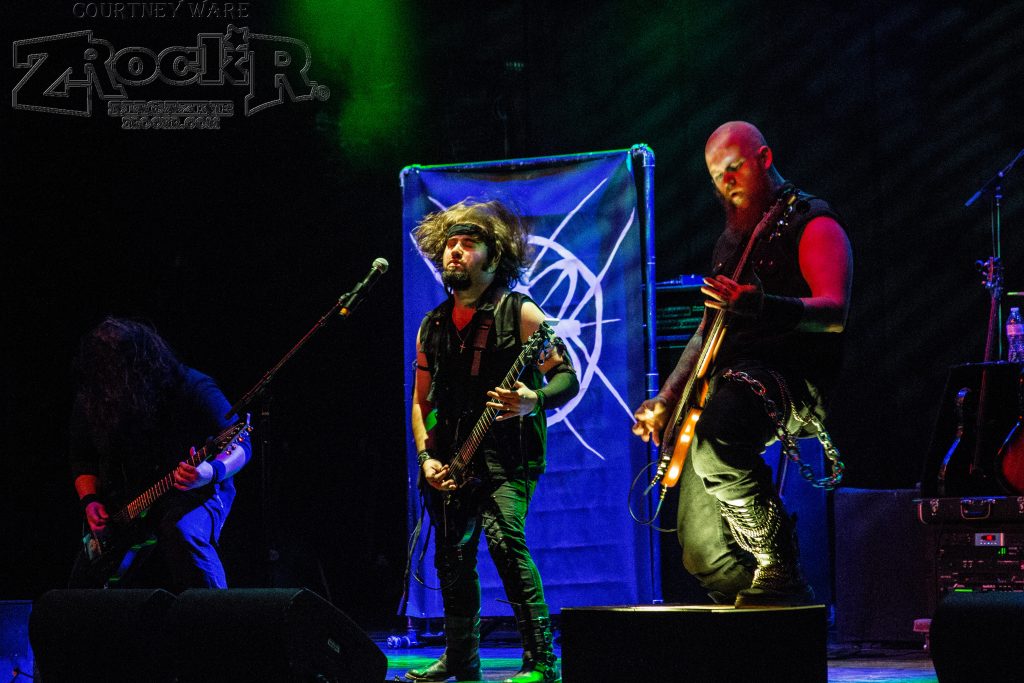 Check out All of the bands at their Facebook pages below:

Raiding the Rock Vault - The Epic ...