Despite a low budget, rushed production, and the movie damn near not even getting a theatrical release, Bill and Ted’s Excellent Adventure would go on to become a classic comedy for the ages, featuring brilliant performances from Keanu Reeves and Alex Winter, and veteran comedian George Carlin. The cast would reprise their role for the sequel, Bill and Ted’s Bogus Journey. Rumors of a third film have persisted in the decades following the release of the first two films, but with the death of Carlin, Reeves being a mega star in Hollywood (probably best known for his role in The Matrix these days), and Winter primarily doing work on the other side of the camera, whether or not we will see a third film is up in the air. 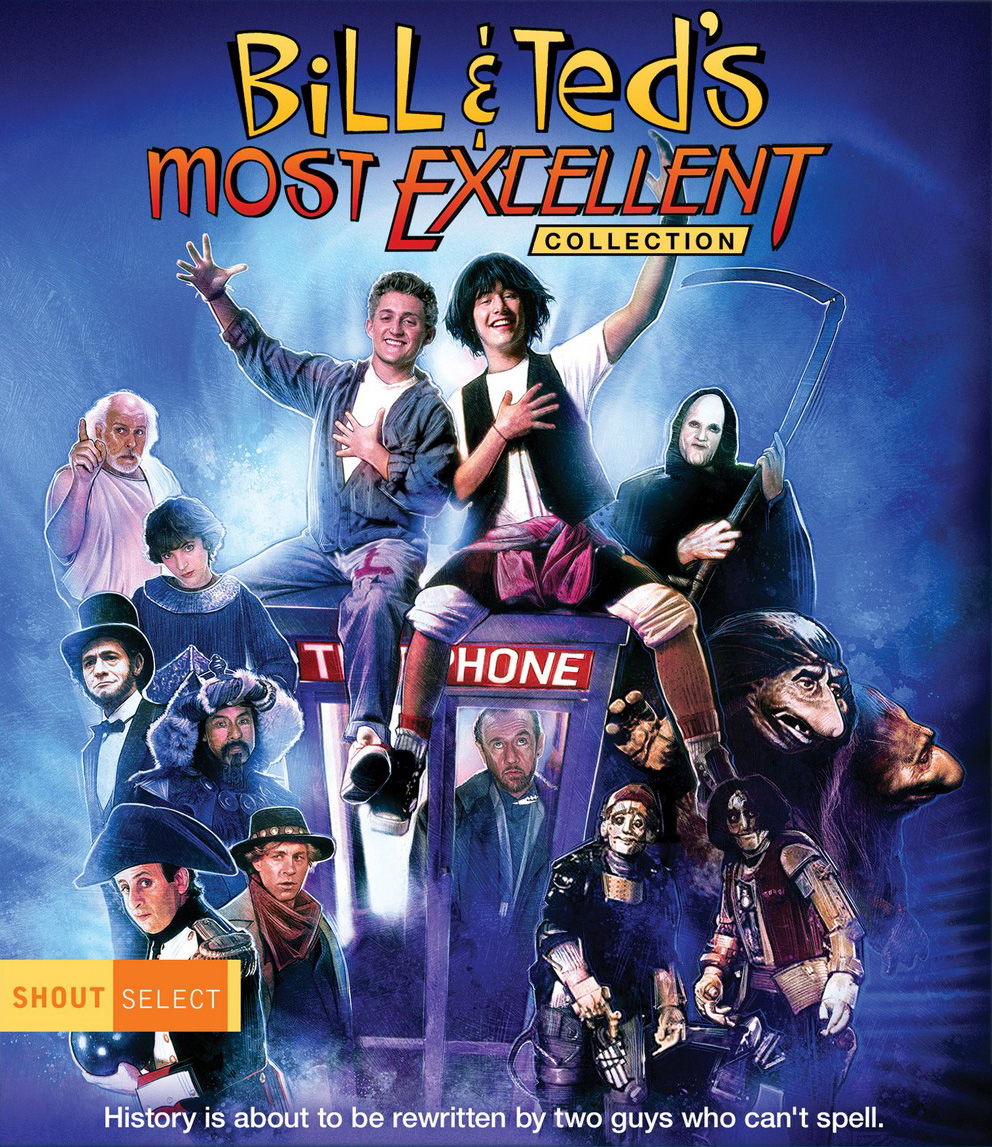 But, in the meantime, niche label Shout! Factory has given us Bill and Ted’s Most Excellent Collection, combining both films, a disc of old and new bonus features, and a few other small surprises. This marks the first release of Bill and Ted’s Bogus Journey on Blu-ray Disc (MGM had previously issued the first film on the format in 2012).

Bill and Ted’s Excellent Adventure was released theatrically in 1989 (though the film had lingered prior to release due to the original production company going bankrupt). Bill and Ted are two over-the-top, idiotic surfer dudes/wannabe rockers in San Dimas who want nothing more than for their band, Wyld Stallyns, to go on to be a global phenomenon. Despite the idiocy of the duo, they remain good-natured and likable, and the best of friends. Unfortunately, they are both in danger of flunking out of school, and must get an A+ on their forthcoming history report just to make ends meet. And if Ted fails, his father is sending him to an Alaskan military school, meaning no more band!

Things take an interesting and unexpected supernatural turn when the mysterious Rufus emerges from a phone booth time machine; he is from the future and wants the boys to pass their report, as their music is, interestingly, integral to the formation of a peaceful, utopian future! Using the time machine, Bill and Ted take a trip through many different time periods, gathering persons of historical significance over the centuries that they can use to successfully pass their report, and get back on their way to forming a band. 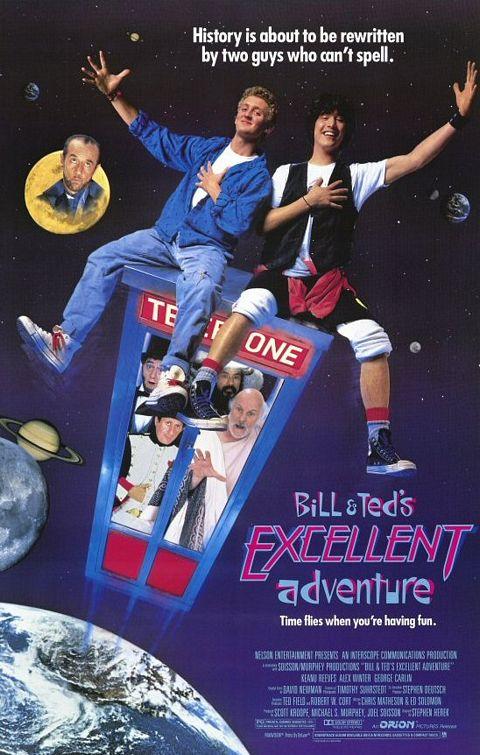 Bill and Ted’s Excellent Adventure is movie is laughably dated, campy as hell, and far from perfect. And yet, somehow, these things only add to the movie’s charms. The chemistry between Keanu Reeves and Alex Winter is undeniable, and likely would not have worked with any two other actors. Comedy icon George Carlin (RIP) became known to a whole new generation of fans for his work here, as something of a mentor figure to the boys, wanting them to pass their report so that the utopian future is not in jeopardy. The supporting cast includes Jane Wiedlin of the Go-Gos as Joan of Arc, and Bernie Casey (RIP) as the boys’ history teacher, who does not seem too impressed with how little the boys have learned.

In its 90-minute duration, the title duo goes everywhere and does everything, from getting into a saloon brawl with Billy the Kid, to philosophizing with Socrates (which they pronounce “SO-crates.”) Some of the film’s most hilarious moments come from seeing historical figures of the past interacting with the modern world, whether it is Napoleon at a water park, or Genghis Khan trashing a sporting goods store. This isn’t a "deep" film, but the cast and crew always manage to hold your attention, and the classic history presentation at the end of the film serves as a definite highlight.

Bill and Ted’s Bogus Journey followed a few years after the original movie. In the utopian future spoken of in the first movie, all hell breaks loose. An outlaw group begins wreaking havoc, fronted by the evil De Nomolos. In the present, Bill and Ted are preparing for a Battle of the Bands competition, which could take them places on their journey to stardom, but things take an unexpected turn for the worst when De Nomolos sends robot clones of Bill and Ted back to the present to kill the duo and cause mayhem in the present day!

After their deaths, Bill and Ted find themselves in Hell, where they must join forces with the Grim Reaper to escape back to Earth, allying with the universe’s greatest scientists, so that they can create their own good robots to battle the evil ones. But will their efforts be enough to halt De Nomolos’ scheme and stop the evil robots? And will they win the Battle of the Bands? 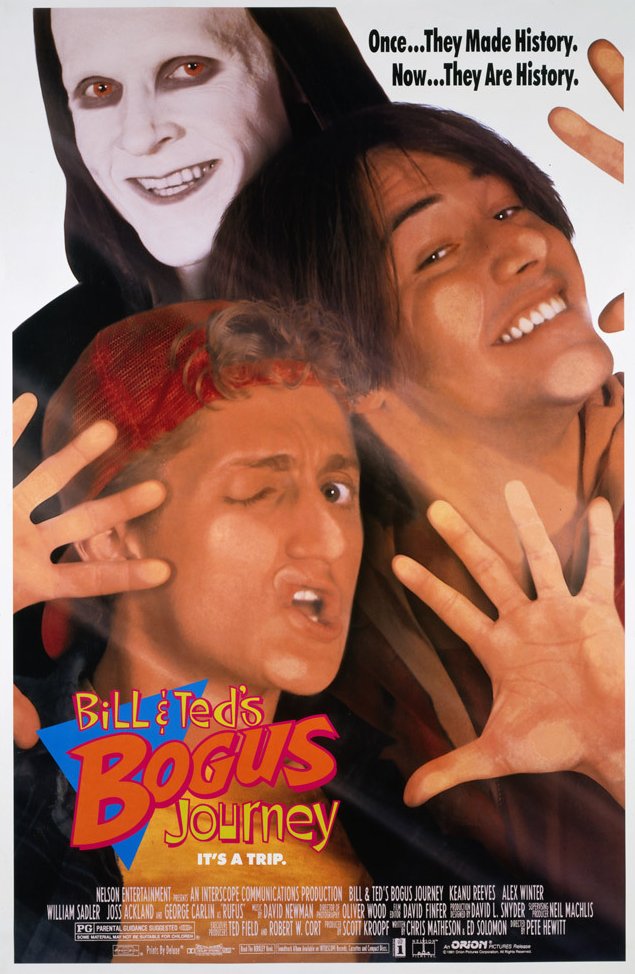 Okay, following up a movie like Bill and Ted’s Excellent Adventure would not be an easy task under any circumstances. After all, it would be foolish not to follow up on the surprise success of the first movie. I give the filmmakers credit for not simply copying the original film, but it can’t prevent Bill and Ted’s Bogus Journey from falling short of the original movie. That said, not all is bogus; there is still plenty to love about the duo’s second film.

As far as the positives go, one has to admire the film crew for trying something different, while at the same time retaining the chemistry between Bill and Ted from the first movie. The scenes in Hell and involving the Grim Reaper bring plenty of freshness to the table; William Sadler steals the show in his portrayal of Death, whether he is keeping the boys in his company to play board games for a chance at freedom, or is rocking on stage at the end of the film, in the Battle of the Bands. The climax does not surpass the first film, but is a valiant effort that ends things on a high note.

Unfortunately, not everything succeeds the second time around. Some plot developments make no sense (Bill’s stepmom divorced Bill’s dad and married Ted’s dad? Ted’s dad still threatens Bill with military school despite him having moved out?) The scenes in Hell are fun but drag on longer than they need to; Alex Winter in drag portraying Bill’s grandmother is more creepy than funny. Other elements of the movie, like a vengeful Easter bunny in Ted’s Hell, and the “Station” aliens, feel horribly out of place. Rufus is disappointingly relegated to a glorified cameo, and the attempt to create a central villain in De Nomolos (something the first film lacked) falls flat because we don’t simply learn enough about the guy to care about him; he ends up feeling like an afterthought.

Bill and Ted’s Bogus Journey suffers from “sequel syndrome;” I won’t find myself revisiting as much as the original film. But the movie still has its moments, and it is worth checking out at least once if you were a fan of the original.

The picture quality of these discs is surprisingly good given the nature of the source material, with the only really lacking moments typically being those that incorporate the special effects of the day (this is due to the effects and how they were filmed, not limitations of the Blu-ray Disc format). The audio is generally audible, and does get a bit of the workout in noisy action scenes, or music-heavy moments.

Shout! Factory, once again, has gone the extra mile for fans, and given them something new and spectacular in the form of special features, namely an hour-long doc on each of the films newly made for this release; far more cast and crew members are interviewed here than on older featurettes that previous versions of the movie have had. There are even multiple commentary tracks for both movies! Many of the archival featurettes are included here, although many of them are redundant and dated when compared to the newer, more thorough featurettes that Shout! Factory created for this release. The set also includes two stickers and a Wyld Stallyns guitar pic.

All of the bonus features from the earlier Bill and Ted’s Excellent Adventure Blu-ray are included with the exception of some radio spots promoting the film, and an episode of the animated cartoon series. These were presumably omitted for legal reasons; it would be nice to see Shout! Factory release the animated series and the live action TV series eventually though.

The Bill and Ted movies are definitely worth a second look, and this is a fantastic package for fans. Whether you are rediscovering the movies or seeing them for the first time, this is a strongly recommended package. Come for the first movie, stay for the sequel and Shout! Factory’s new documentaries.

Recommended for all fans!

DISCLAIMER: All images in this review are the property of the respective copyright holders, including (but not limited to) Shout! Factory, Nelson Entertainment, and Orion Pictures. For promotional use only. All rights reserved.