Home›Movie Reviews›Murder on the Orient Express - Kenneth Branagh Brings the Agatha Christie Classic to Life on the Big Screen!

Murder on the Orient Express - Kenneth Branagh Brings the Agatha Christie Classic to Life on the Big Screen!

Murder on the Orient Express is directed by Kenneth Branagh, and is based on the 1934 novel by Agatha Christie. The film stars Branagh, along with Penelope Cruz, Willem Dafoe, Judi Dench, Johnny Depp, and Daisy Ridley, and features a musical score from Patrick Doyle.

Famed Belgian detective Hercule Poirot boards the Orient Express train line, following his solving of a crime at the Wailing Wall. Aboard the train, an avalanche strands Poirot and the other passengers on the train line, during which time, one of the passengers is murdered under mysterious circumstances. Knowing the outside world will not be likely to present fair justice and that they may discriminate, Poirot takes the case, investigating the passengers to find any evidence or suspicion, but discovers that there may be more to the case than meets the eye.

Prior to seeing this film, I had primarily known Kenneth Branagh for his film adaptations of William Shakespeare’s works, as well as directing the first Thor film in the Marvel Cinematic universe. I was vaguely familiar with the story on which this film is based, though had not read the novel or seen any of the prior cinematic adaptations, meaning I was essentially coming in “blind” (as I am guessing is the case with many moviegoers). Branagh the actor brilliantly plays Poirot and steals the show, but Branagh the director finds himself struggling to juggle the large cast of characters and plot points, which results in something of a mixed bag.

As far as the positives of this film go, Branagh’s Hercule Poirot, with Belgian accent, ridiculous mustache, and perfectionist attitude, make the movie. This is the role Branagh was born to play. The film does a brilliant job introducing the character in its opening Wailing Wall scenes, and from that point on, we are hooked and want to see more of this guy and what he does. Even with the flaws of the film, I would be willing to see a sequel based on the strength of his performance here alone.

The look of the film is equally impressive. Shot on 65mm cameras (one of the few films of recent times to make use of them), the cinematography from Haris Zambarloukos definitely deserves a mention. The expanses of train tracks through snowy mountains and the exotic Middle Eastern cities come to life, as do the smaller and more intimate interiors of the Orient Express. 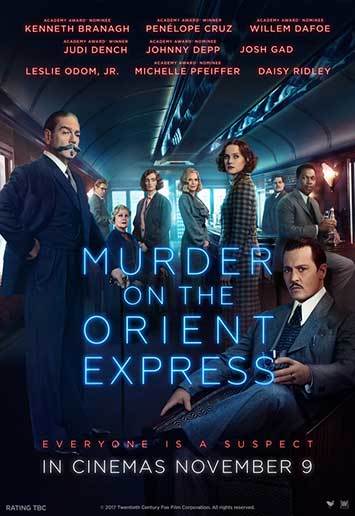 Unfortunately, other aspects of the film fall flat, despite Branagh’s performance and beautiful cinematography. When you have to juggle roughly a dozen or so suspects, the rest of the characters feel one dimensional and lack depth, with little to make them stand out or feel overly interesting. There are also additions of token action scenes which feel out of place, and added for no reason other than to attempt to “add some action” to the film. It does not help that we as an audience are overwhelmed by the fairly rapid introductions of the characters, and get little to go on when it comes to learning about them or finding ourselves caring. Murder on the Orient Express simultaneously tries to do too much and too little when it comes to its A-list cast, all of whom have to play second fiddle to Branagh’s Poirot. There are some pacing issues as well, particularly in the latter act of the film.

Put simply, Murder on the Orient Express features a career-defining role from Kenneth Branagh, combined with beautiful cinematography, but it cannot change the fact that everyone else is underdeveloped and lacks depth, essentially making a waste of a cast that includes some of the entertainment world’s finest. That said, there is more than enough here to at least merit a modest recommendation.

DISCLAIMER: All images in this review are the property of the respective copyright holders, including (but not limited to) 20th Century Fox. For promotional use only. All rights reserved.