Home›Movie Reviews›American Made - Tom Cruise Stars in the True Story of Barry Seal!

American Made - Tom Cruise Stars in the True Story of Barry Seal!

American Made is directed by Doug Liman, and stars Tom Cruise. The film is written by Gary Spinelli, and features a musical score by Christophe Beck.

American Made is based on the true story of Barry Seal. A skilled flier, the airline pilot is whisked away from his “day job” to fly covert missions for the CIA, taking pictures of enemy bases in countries south of the border. It is not long before he is recruited by drug cartels to begin smuggling cocaine into the United States on his return trips, giving him more income that he has had before in his life. But it is not long before this lifestyle attracts the attention of government organizations, and becomes increasingly difficult to keep secret from his wife and children. 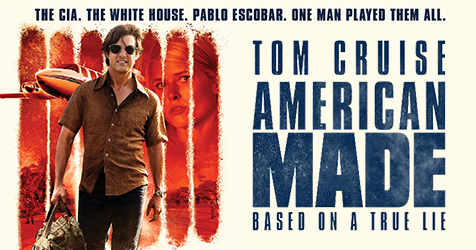 Before getting into this review, it should be mentioned that there are many aspects of this film that have come under fire for their historical accuracy, or lack thereof. This is not uncommon with any film that is based on a true story. The filmmakers have acknowledged this in interviews, and it should be reinforced that this is a dramatic and at times comedic film based on a true story; it is NOT a documentary.

Say what you will about Tom Cruise, the man is a fantastic actor and manages to impress in nearly every role. American Made proves to be no exception, and his confident, charismatic take on Barry Seal definitely steals the show. Regardless of what the scene calls for, Mr. Cruise delivers, whether he’s encountering unexpected hazards while flying, or having a conversation with his wife regarding his new “business ventures.”

The film keeps you interested throughout its duration, throwing Seal into increasingly ludicrous situations, to the point where he (literally!) has more money than he knows what to do with. I would compare the film favorably to something like Goodfellas, where you have a protagonist that finds himself on the pathway to seemingly endless financial success, only to eventually find himself a victim of his excess, which leads to a subsequent fall from grace. The movie ranges from the lighthearted and comedic, to true scenes of despair and uncertainty, but it all flows together nicely. The use of real-world newsreel footage to illustrate the era was a nice touch as well. 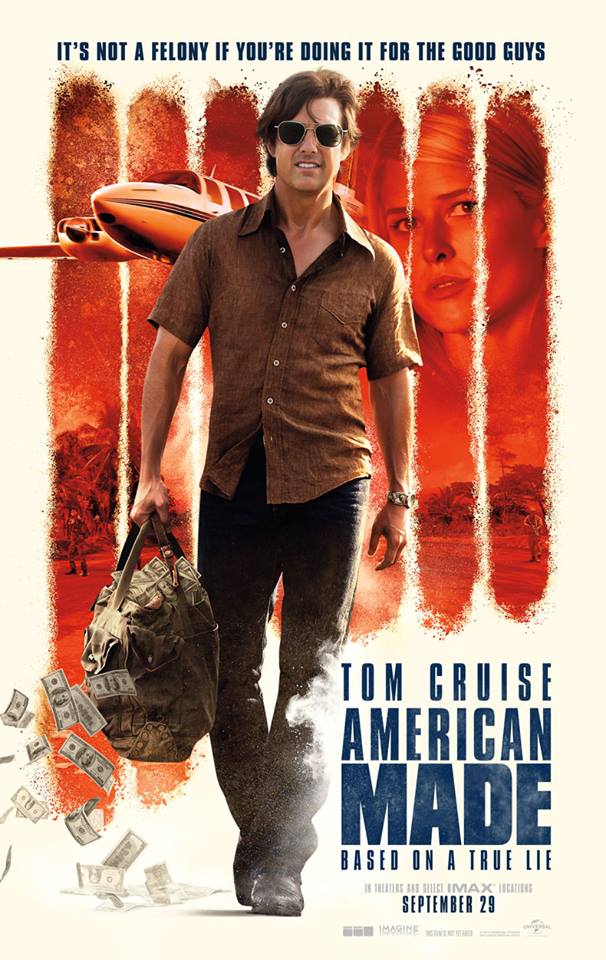 Furthermore, the look of the film is equally impressive. From suburban scenes in small American towns to battle-ridden third-world countries that Seal travels to, the movie looks fantastic. The aerial scenes are equally impressive, though they feel a touch crowded and cramped at times. Interestingly, the movie was exhibited in a wider aspect ratio in overseas markets, so what we are seeing may be a crop of the wider version shown in those countries. For this reason, I am hoping the eventual home release offers a choice between the two dimensions, as many of the aerial scenes would benefit from a wider aspect ratio. Still, while noticeable, this hardly had any impact on my like for the film.

The main issue I had with the film is that some characters/subplots never really got the proper emphasis, namely Seal’s family life, and some of the additional pilots he recruits to help him out. A few of the subplots, including Seal's deadbeat brother-in-law, feel excessive and unnecessary. Seal’s family life tends to get the shaft in the film’s midsection, though I can understand the filmmakers’ need to focus on the main storyline at hand here.

American Made is not a perfect film, and not necessarily totally historically accurate, but that does not keep it from being a lot of fun. Tom Cruise delivers one of his best performances in years, and the story of Barry Seal manages to be the perfect vehicle for his stage presence, showing you his star power is not going anywhere anytime soon. At long as you’re not a stickler for historical accuracy, you’ll enjoy American Made.

DISCLAIMER: All images in this review are the property of the respective copyright holders, including (but not limited to) Universal and Imagine. For promotional use only. All rights reserved.

A Bad Moms Christmas - A Hilarious ...