Geostorm - This Disaster Film is.... a Disaster

In the not-so-distant future, an international team of scientists develops Dutch Boy, a space station and series of satellites that can control Earth’s climate, preventing a repeat of past natural disasters. When Jake Lawson, chief architect of the Dutch Boy system, is reprimanded by governmental superiors, his younger brother Max is placed in charge of the project. Three years later, when the Dutch Boy system causes disasters on Earth causing numerous deaths, Max must reunite with Jake, sending him into space to lead a team to fix the system and prevent the occurrence of a geostorm; a chain reaction of natural disasters with the potential to destroy the planet. 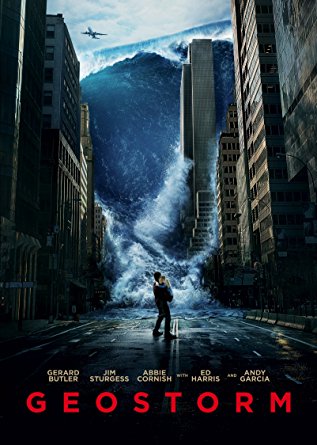 Geostorm had a troubled production history, with filming having started in 2014, and poor test screenings resulting in the film being retooled with numerous reshoots. The film has finally gotten its theatrical release, and not surprisingly, the end result feels disjointed, cliched, and like a predictable amalgamation of plot points from countless better films.

It is tough to say exactly where Geostorm goes wrong, but the combination of everything we have seen at the movies a million times over done in an inferior fashion does not help. For the most part the film is well cast, but Gerard Butler and Jim Sturgess look more like father and son than brothers, which works against the movie. Additionally, although the trailer may lead you to believe otherwise, the “daughter” character played by Talitha Bateman is barely in the movie at all, which comes as something of a disappointment. The actors do the best they can with the material, but it cannot save the end product.

And then come the cliches. Scientific technology to help mankind gone awry? Check. Computer viruses? Check. An overabundance of mediocre CGI work? Check. Political motivations and plot twists? Check. A young girl who is also a scientific genius? Check. Double agent traitors? Check. Estranged family that must come back together because of a disaster? Check. Romantic subplots with zero depth? Check. Plot holes galore? Check. A car chase? Check. Natural disaster scenes of major cities being leveled? Check. Self-destruct sequence? Check. Race against time? Check. A predictable happy ending? Check. Even though Geostorm has its share of exciting sequences, poor writing and the sheer predictability prevent this one from ever rising above B-movie status. Everything in this movie was pulled from better movies, which have handled these respective plot points on their own in a far superior fashion.

Geostorm may have a handful of entertaining sequences, but it is awash in a sea of bad writing, mediocre CGI work, and so many things that have been done better in other films. There just is not enough here to recommend the film, which is as much a disaster as the natural ones it depicts on the screen.

Murder on the Orient Express - Kenneth ...