My Friend Dahmer is directed by Marc Meyers, and is based on the graphic novel of the same name by John “Derf” Backderf. The film stars Ross Lynch, Alex Wolff, Dallas Roberts, and Anne Heche. The film premiered in April at film festivals, with a wider (though still limited) release in November.

My Friend Dahmer is the story of Jeffrey Dahmer’s high school years. In his teens, Dahmer is a socially awkward student who is a regular target for bullies and harassment, but finds an interest in studying and dissecting dead animals, due in part to having a father working in chemistry. As the school year progresses, Dahmer’s misbehavior and antics win him the respect of a small circle of friends, but descending deeper into drugs, alcohol, his personal obsessions, and dealing with his parents divorcing and his closeted homosexuality, he is set on a path of destruction that will culminate in his transformation into one the most infamous serial killers in the United States. 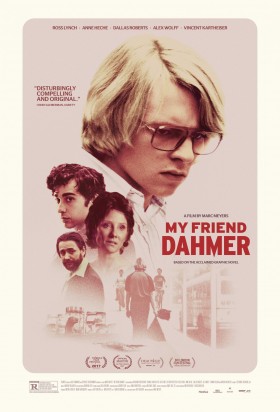 My Friend Dahmer is an interesting film, to say the least, in that it explores the younger life of Jeffrey Dahmer, before he began his killings. The film does a solid job painting a picture of a distraught and socially awkward young man who would rather be dissecting and dissolving roadkill than joining more social group activities, and also beautifully demonstrates the effects of parental neglect and divorce on children and teens. While the film is not perfect and does spend a little too much time on tertiary elements, it accomplishes what it sets out to do, for the most part.

Ross Lynch is the perfect actor to portray the young Dahmer, and shines in every scene of the movie, be it one that demonstrates the homicidal nature that will eventually take over his mind entirely, or one where he struggles for acceptance or to even get attention of any kind. I would not exactly say the film makes him sympathetic or his future actions forgivable, yet Lynch does make the character appealing in his own way despite this. This is a far cry from the parts that Lynch has played on Disney Channel shows, which makes it all the more uncomfortable and disorienting to the audience.

The supporting cast fares nearly as well, with Alex Wolff as Derf, Dahmer’s artist friend (the real life Derf would later be the author of the My Friend Dahmer graphic novel that would inspire this film), and Anne Heche as Dahmer’s troubled, deadbeat mother who battles addiction. Other superb portrayals include Vincent Kartheiser as a doctor who Dahmer simultaneously pines for and wants to kill, and Dallas Roberts as his well-meaning father.

While the film is solid overall, a few elements fall flat. There are some elements/subplots/etc. that feel underdeveloped, and some events that feel tertiary and unnecessary. These elements include a subplot involving a potential friend early in the film that is also a bullying victim, and an outlaw student who deals drugs and owns weapons; the latter in particular was clearly an influence in Dahmer’s addiction and obsessions later in life, and it is a shame we don’t see this relationship developed more in the film. There are also a few other scenes that hint at other relationships/developments, though we do not really get the necessary follow-through; in many cases I am guessing the filmmakers wanted to imply things rather than tell directly, though this is not all a bad thing. The film probably could have been about 15 minutes shorter with a few additional subplots/unneeded tertiary elements trimmed, but overall the final product satisfies.

My Friend Dahmer does a solid job representing the early lives of one of the most infamous men in the United States, long before his most heinous of acts. It is fantastic to get a Dahmer film that focuses more on his early life, rather than simply being depictions of the future killings everyone knows him for. The movie does an impressive job setting the seeds into place for the future, and definitely gets a recommendation from his moviegoer.