Coco – Disney and Pixar Take Audiences to the Land of the Dead!

Miguel Rivera, a young boy living in Mexico who comes from a family in the shoe making business, has dreams of picking up a guitar and becoming a successful musician like his idol, Ernesto de la Cruz. But the Rivera Family has long since banned music in all shapes and forms since one of their ancestors, Imelda, had her heart broken by a musician that chose the music world over her. Against his family’s wishes, he goes to participate in a music festival on the day of the dead, but when attempting to play Ernesto’s guitar, he finds himself in the land of the dead, on the run from his deceased ancestors, who want to send him back to the world of the living despite his family’s anti-music ways. Teaming up with the eccentric Hector, Miguel tries to seek out Ernesto, so that he may return to the living world with his blessing, in the pursuit of music, but he discovers that things may not be exactly as they seem.

Okay, let me get one annoying piece of bad news out of the way first (which in no way impacts my positive review of Coco). Prior to the film in theaters, a Frozen short is being shown…. Which is nearly 20 minutes in length! A short is supposed to be just that – short. This 20-minute segment, with its overabundance of slapstick humor and second-rate songs sung by the characters, wears out its welcome very quickly. Pixar has a long history of including a short prior to their main features, but these are usually ones that they produce in-house, which clock in around the 10-minute mark. Pixar should have produced their own five-minute short to go before the movie, rather than settling for this overlong, drawn-out experience that should have been relegated to half-hour TV special status. 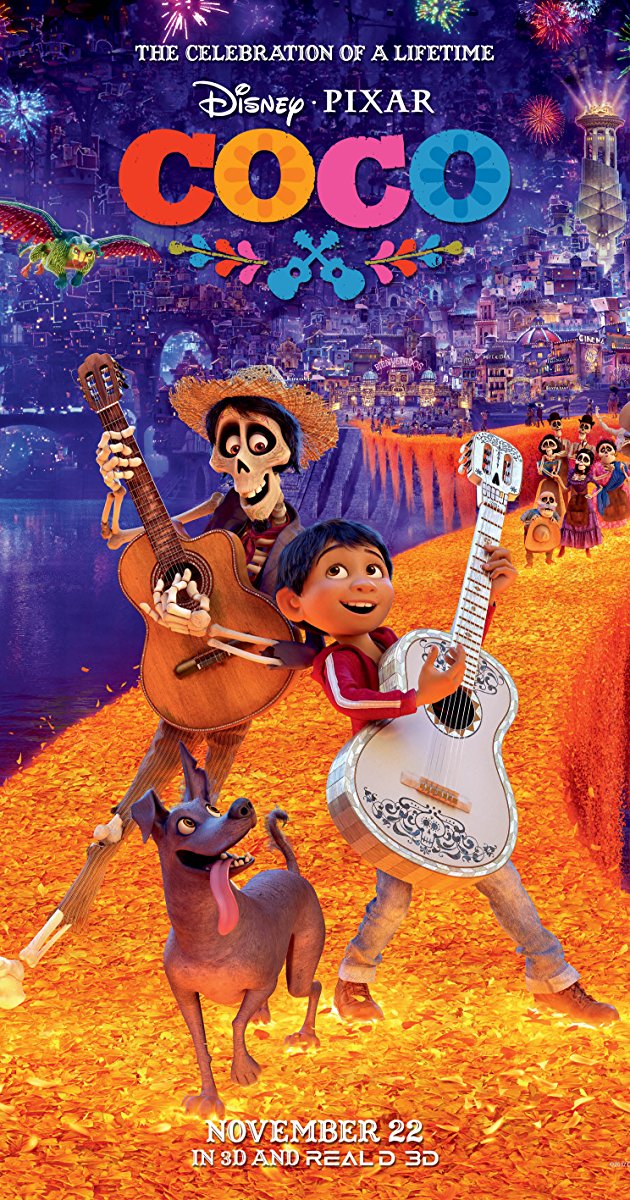 All right, now that we have that ugliness out of our way, how does Coco measure up? Once again, the minds at Pixar manage to impress. For over two decades now, they have been bringing the world feature films that satisfy kids as well as adults; this is no easy task for any animation company to achieve! Coco is another success for the animation geniuses, giving young and old audiences fun and interesting characters, Mexican culture, a surreal setting for much of the action, and genuine drama. And while the film is not perfect, it shows that the minds of Pixar have not run out of steam yet, and are bound to be bringing audiences the ideal tales for all ages for years to come.

When you can create a PG-rated, animated story that has as much genuine drama as many live action tales, you know you are doing something right. Coco gives us a fantastic protagonist in the form of Miguel, a boy who wants to follow his dream, but with a family that has banned all music due to past family issues, that becomes more than a bit difficult to achieve. Everyone will find something to relate to in Miguel’s struggle, and the movie actually manages to tug at the viewer’s heartstrings on more than one occasion. How many family-friendly animated films can pull that off?

The atmosphere of the film is one of its greatest strengths, with traditional Mexican-style locations and musical score. This feels like an authentic environment, and even the surreal take on the land of the dead makes for some interesting moments. Pixar does not fail to please when it comes to animation, and using it to take their viewers to whole new worlds. Every frame of Coco looks like a work of art, and the incorporation of authentic elements of Mexican culture and folklore only adds to the experience. It is a new and unexpected locale for an animated tale, and they pull it off better than you would expect.

The movie is not quite perfect. The biggest issue I had throughout the film was the overuse of “skull physics” gags in the land of the dead, with bodies being broken and otherwise manipulated, and coming back together. This is a fun gimmick, but it quickly becomes clear that the writers and animators simply did not know when to stop with it. Also, while there are a few plot twists, much of the movie becomes predictable, particularly in its latter few moments, in which the writers and animators try to throw in a few too many action sequences, which drag the movie out longer than necessary. The final film could easily have been about 10-15 minutes shorter.

Coco is another triumph for Pixar despite its minor shortcomings. They have given us memorable characters, environments, culture, and an entertaining series of events that is sure to please young and old alike. It is definitely worth seeing in the theater, and should impress all audiences.

DISCLAIMER: All image in this review are the property of their respective copyright holders, including Disney and Pixar. For promotional use only. All rights reserved.