Mary is visited by an angel, and told that she has been chosen to carry and give birth to the Son of God, something that initially does not bode well with her husband Joseph. Joseph and the pregnant Mary set out for Bethlehem when a wicked king declares a census in an effort to find this “new king.” Animal friends Bo the Donkey and Dave the Dove, who have dreams of running away and joining a royal caravan, decide to tag along when they find that Mary and Joseph are in danger, with many obstacles coming their way along the path. 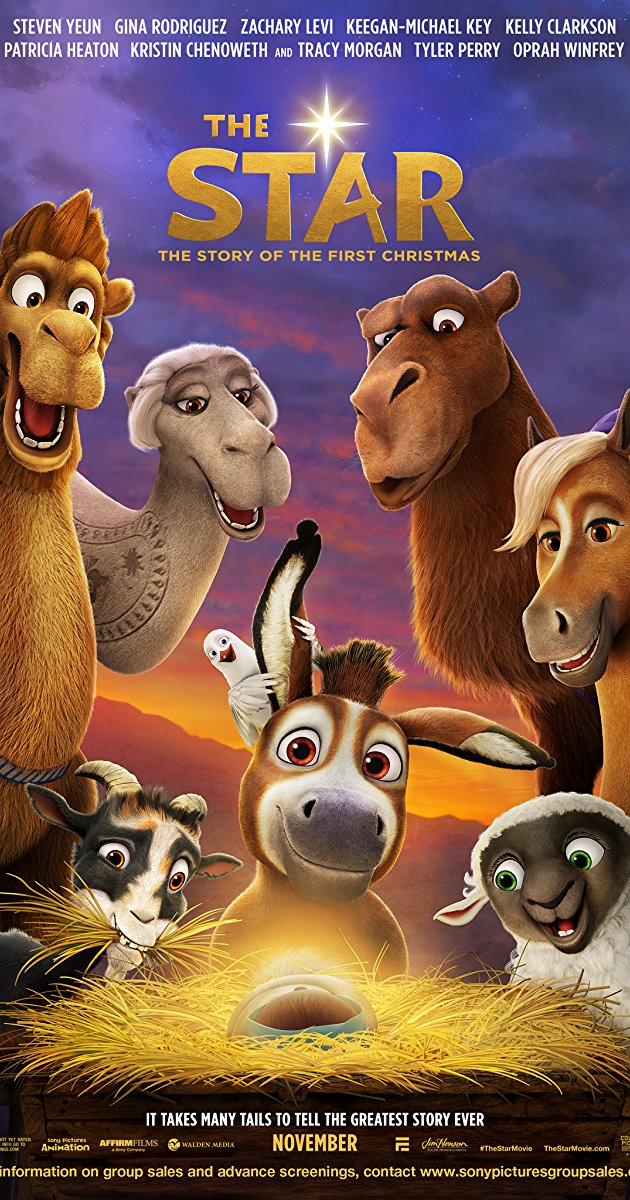 Animated films starring talking animals are nothing new, nor are films about the birth of Christ. The Star attempts to slap both of these genres together, but the end result is a mess that is not going to appeal greatly to anyone. The inconsistent tone, overabundance of unnecessary characters and subplots, average quality animation, and horribly anachronistic attitudes and music derail the experience. The film is of far lower quality than one with this big and talented a cast should be.

The film immediately loses points for its inconsistent tone. The scenes handling angels and their voices are handled with a serious reverence which is appropriate for the subject matter, but the rest of the film is a generic slapstick comedy with an overemphasis on weak gags we’ve seen a million times before. The Star can’t seem to decide which direction it wants to go, and pays the price for it throughout its 90-minute duration. While I am pleased to see a mainstream, animated film from a major studio that touches on the story of Christ, this is no substitute for Christian parents teaching their kids the actual story, especially considering here it plays second fiddle to “talking animal slapstick.”

The Star also simply has too much going on for any one subplot to hold our attention. Rather than putting most of the emphasis on Mary and Joseph, the movie focuses too much on Bo the Donkey and his “side adventures.” And even then, all of that is simply “going through the motions.” The Three Wise Men feel like afterthoughts, and their wisecracking camels quickly wear out their welcome (fortunately they aren’t in the movie too long). It is a shame to see the movie has so much big-name talent, yet most of them are reduced to what feel like glorified cameos.

And then we have the anachronistic music and character attitudes. Characters act “hip” like modern-world people, which betrays the Biblical setting. Likewise, annoyingly modern and overproduced pop takes on Christmas songs are played throughout the movie, which feel like an unwanted distraction, further taking us away from the setting. There are some decent looking locations, but the poor choice of music and character temperaments further works against the film.

I would not say The Star is a total loss, but there simply is not enough going for it to give it a recommendation. The voice cast is talented enough, but there is simply too much going on, with too many characters and countless others reduced to glorified cameos. We’ve seen these “talking animals” with hip, modern attitudes in movies a million times before, and a Biblical setting is the last place we needed them. At the end of the day, the film simply cannot decide what kind of a movie it wants to be. The story of Christ deserves better than a slapstick family comedy that feels painfully generic throughout its duration.

DISCLAIMER: All image in this review are the property of their respective copyright holders, including Walden Media and Sony Pictures Animation. For promotional use only. All rights reserved.

The Ghost Bride - Filipino Horror From ...