Home›Movie Reviews›Let There Be Light - The Feature Film Directorial Debut of Kevin Sorbo!

Let There Be Light - The Feature Film Directorial Debut of Kevin Sorbo!

Dr. Sol Harkins is a staunch atheist who has written numerous books on the subject, and is a worldwide celebrity for his writing and unflinching stance. However, his lack of faith in God as pushed him away from his ex-wife and kids, whose beliefs he has regularly ridiculed. When he sees his deceased son (who had died of cancer years earier) in a vision following a near-death experience, he begins to have second thoughts on the power of Christianity, much to the delight of his family… and to the chagrin of his press agent.

Kevin Sorbo will probably forever be known for playing Hercules on television in the latter half of the 1990s. For that reason, hearing that he would be playing an atheist-turned-Christian sounded like an interesting development, and certainly on the opposite end of the spectrum from what this moviegoer/television viewer has seen/remembered him as over the years. Let There Be Light is Sorbo’s directorial debut, starring him, as well as his real-life family and a strong supporting cast. There are powerful scenes and messages here, but much of the film feels rushed and bogged down in additional, unnecessary melodrama that feels like padding on top of an already full film. The picture is not perfect, but succeeds more than it falters. That said, I don’t think it is going to make believers out of non-Christians. 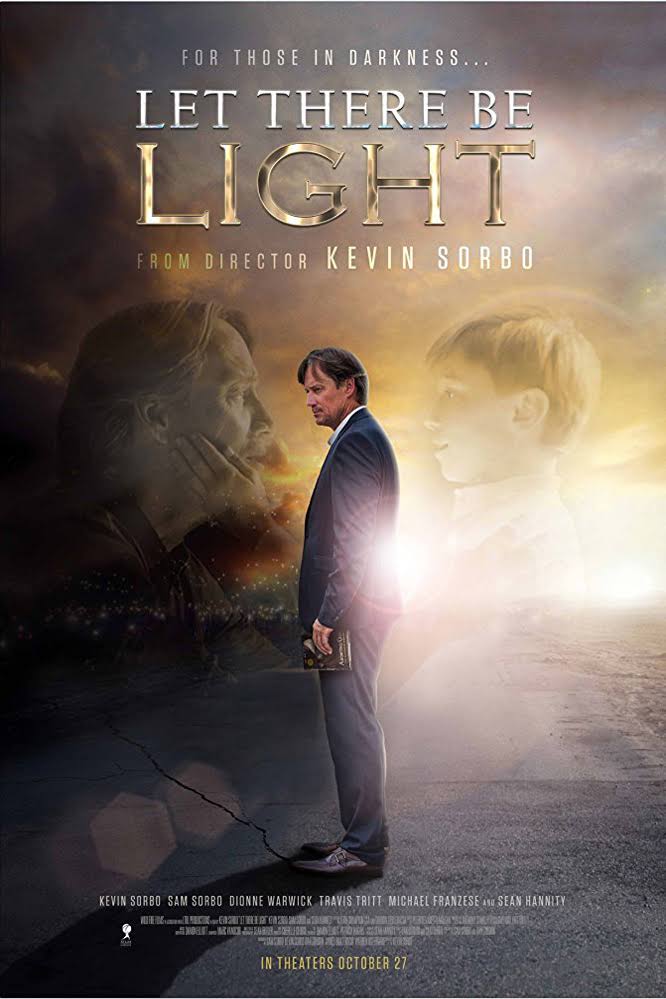 Kevin Sorbo himself deserves the most credit. Despite being his directorial debut, for the most part, everything flows quite naturally. Sorbo’s performance is superb as well; for the most part, his transition throughout the film makes for some powerful drama, and does not feel forced or artificial. He even uses his real-life family as his family in the film, and while the performances from his sons feel wooden and unconvincing at times, his wife Sam Sorbo (who co-wrote the film) gets some of the movie’s best moments as well.

The supporting cast is impressive too, with Daniel Roebuck as an over-the-top literary agent, and the best performance coming from Michael Franzese as a former wiseguy/inmate turned preacher, who is criminally underused.

The film also scores points for, despite its obvious message, not feeling like a work of propaganda. There are genuine scenes of drama in the film; the opening scenes and its follow-ups featuring the Harkins character in his initial atheistic period are surprisingly effective and entertaining; they are a far cry from the man we know at the end of the film, and it is for this reason that much of the transition and story feel believable. Let There Be Light has a strong Christian message, but does not feel like an after-school special or a 100-minute commercial for Christianity, which is one of the best things one can say about its execution.

Unfortunately, while my view of the film overall is positive, it does falter in a few areas. For instance, too many scenes feel rushed, and as such, these elements never quite have the impact that they should. Sadly, some of the most important elements of the film suffer from this, including the point where Sorbo accepts Christianity, and an additional dramatic storyline later in the film that is largely relegated to montage status. These elements work against the film and the genuine drama on display. Additonally, plot elements of Sorbo’s character’s professional life are more or less absent from the second half of the film; something the first half handled surprisingly well.

But the single biggest problem with Let There Be Light is that the film does not know when to stop. The story of Sorbo’s character becoming a Christian is a powerful one, with him coming to terms with himself, his beliefs, and reconciling with his family. This alone makes for a powerful story, but the film feels the need to throw another tragic plot twist into its third act, which just feels like needless padding on top of everything else, and undermines the earlier development in the central plot. If the crew had known where to stop and take the “less is more” approach, the end product would have been more satisfying.

Let There Be Light does suffer from a rushed narrative and its needless third-act plot twist tragedy, though the film is largely satisfying otherwise. I highly doubt the film will make non-Christians convert, but for what it is, it is a satisfying dramatic tale that beautifully shows off a different side of Kevin Sorbo than what people know him for. There is certainly enough here to merit a modest recommendation.

Wonder - A Heartwarming Film With an ...