Wonder – A Heartwarming Film With an All-Star Cast!

Wonder is directed by Stephen Chbosky, and is based on the novel of the same name by RJ Palacio. The film stars Julia Roberts, Owen Wilson, Mandy Patinkin, Daveed Digs, Izabela Vidovic, Noah Jupe, Danielle Rose Russell, and Jacob Tremblay.

August “Auggie” Pullman is a young boy who was born with facial deformities, and remains disfigured despite numerous surgeries. His mother encourages him to begin attending public school, where he immediately becomes a target for bullies, but still manages to make friends and impress his teachers, progressing through the school year. Meanwhile, his sister, Via, is dealing with her own drama, finding herself estranged from a lifelong friend, but finding solace in a relationship with a boy she meets in her school’s drama club, and in reconnecting with Auggie, wanting him to be happy and able to get through school despite his obvious differences and challenges.

Wonder is based on a novel that, apparently, was very popular at its time of release, though I have not read it personally. That said, the film actually stood as a pleasant surprise, with heartwarming moments, dramatic elements, and a generous dose of comedy. It is a movie that, while biting off a bit more than it can chew (likely due to material from the original novel being truncated), still stands as a refreshing experience sure to make viewers laugh and cry alike. 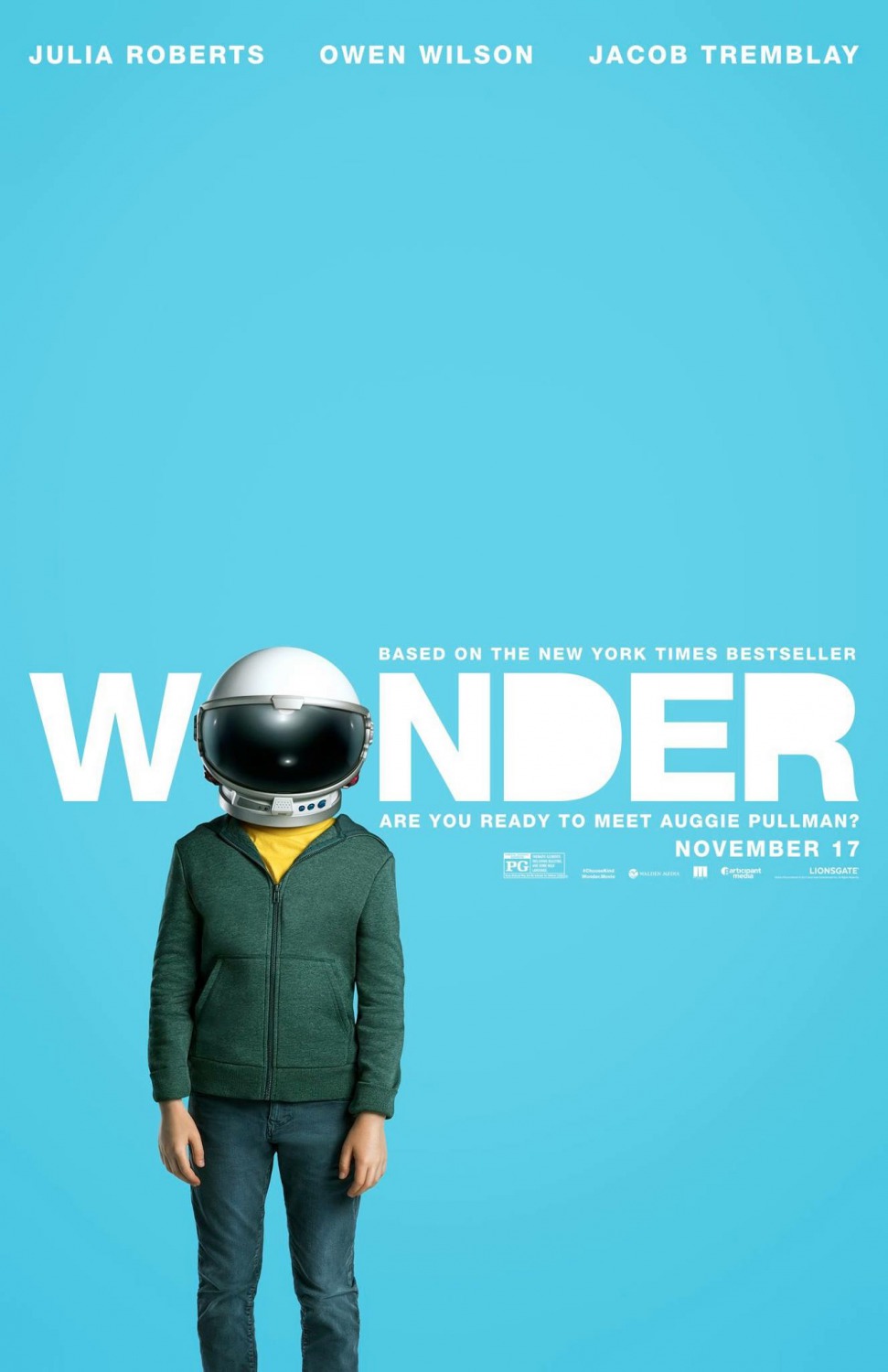 Films that revolve primarily around child/adolescent characters are often made or broken by the performances of the young actors. Fortunately, Wonder has a phenomenal young cast, with many actors I hope to see go on to promising careers in the future. Jacob Tremblay steals the show as Auggie Pullman, who brings a charisma and a vulnerability to this character few others could have. His entire performance feels genuine, and hearing his first-person narration coupled with seeing the world from his point of view makes for a heartwarming tale. Other superb youth actor performances include Izabela Vidovic at Via, Auggie’s sister, and Danielle Rose Russell as the best friend she has drifted apart from.

Of course, the adult actors in the movie are equally impressive, with Mr. and Mrs. Pullman being played by Owen Wilson and Julia Roberts, respectively. Considering Owen Wilson is primarily known for his work in comedies, it is amazing to see him here, pulling off a dramatic role surprisingly well, though still bringing a light comic edge to things. The always impressive Julia Roberts fares well as the “more serious” parent of the two, and gets some of the film’s best dramatic moments. Similarly impressive moments come from Mandy Patinkin (Inigo Montoya from The Princess Bride) as the school’s strict but kind-hearted principal, and Daveed Diggs as Auggie’s homeroom teacher, all of whom bring something unique to the table.

The film scores points for its realism; Auggie’s life in school is certainly not glorified. He is worried that he is going to be ridiculed and stared at for his obvious differences, and in many ways, that is what happens. Yet we also see genuinely good people, young and old alike, who are on his side, becoming friends and supporters, including many that “come around” over the course of time. The chemistry between the characters feels authentic; everyone’s interactions feel true to life, and not fabricated or artificial. One of the most powerful scenes in the film comes in the form of a principal conference with a student that has been bullying Auggie. In the scene, it is painfully clear that this young bully’s attitude and prejudice comes from his parents’ beliefs, and at the end of the scene, he is the lone one that seems to be genuinely sorry and remorseful for his actions. At times, the film can be slightly over-the-top, but for the most part it remains grounded, giving audiences an enjoyable, and perhaps more importantly, believable experience.

The one issue I have with the otherwise superb film is that there are simply too many subplots and secondary/tertiary characters, many of which are relegated to limited screen time. The subplot revolving around Via’s school life is surprisingly dramatic and effective, but does have the consequence of taking us away from Auggie for long periods of time, who audiences will be expecting to spend the duration of the film with. It is the lesser subplots that tend to suffer most, namely Miranda, who struggles with a difficult home life and many other obstacles, yet very little of this gets explored in the film despite it being set up otherwise. Much of this likely stems from having to truncate material from an already very full novel, though this moviegoer wonders if the film would have fared better excising some of these elements of the film altogether, rather than presenting them in a haphazard, undeveloped fashion. As is, these tertiary elements do drag out the film, and it does lose some momentum in the third act.

Wonder is a fantastic, dramatic film that does not shy away from the ugliness of bullies and discrimination, but also stands as a heartwarming tale of acceptance, love, and friendship. The film has a look and atmosphere all its own, and succeeds with a superb cast of young and old alike, with Jacob Tremblay’s performance being a major asset in the film’s favor. Nearly everyone will find something to enjoy about Wonder; the film is well worth seeing.

DISCLAIMER: All image in this review are the property of their respective copyright holders, including Participant Media and Lionsgate. For promotional use only. All rights reserved.