Novitiate is written by and directed by Maggie Betts. The film stars Margaret Qualley, Melissa Leo, and Julianne Nicholson. The film was released in January 2017 at Sundance, with a wider release occurring in November 2017.

In 1954, at a young age, Cathleen Harris is introduced to the Catholic religion, eventually getting a free scholarship to a Catholic school, despite not being raised in the church. Ten years later, having found solace in the teachings of God and the church during a childhood as a loner, she decides to devote her life to the cause and become a nun. Alongside other young girls pursuing the cause and under the tutelage of a ruthless, merciless Mother Superior, Cathleen begins to have urges and desires that make her question her decision to devote her life to God and the church’s teachings. Meanwhile, in Rome, the Second Vatican Council has convened, the first assembly of its kind in over a century, dealing with the church’s future and its public perception.

I will be the first to admit that I am not a religious person in the least, and certainly not a Catholic. And while Novitiate is not a perfect film, it is an absolutely polarizing one, and an eye opener to the church’s past draconian ways, and the grueling tests and tasks that one had to endure to become a nun, entering a life of servitude to the church. Many strong themes are explored here, including being torn between one’s faith and their personal desires and needs, religion and its impact in one’s life, and drastic changes that would forever alter the Catholic Church, from insider and outsider perspectives alike. 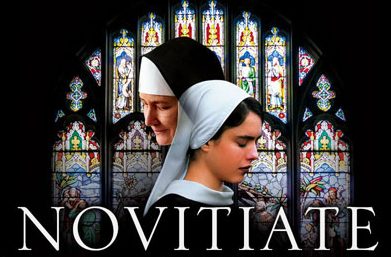 The performances from the actors, young and old alike, are impressive all around. Even the brutal Mother Superior portrayed by Melissa Leo, who has as much in common with a drill sergeant as a nun, manages to garner a few sympathetic moments despite her detestable nature. As Cathleen, Margaret Qualley beautifully paints a picture of someone torn between her love of God and her personal quest for validation and comfort, something many of the girls in the film clearly lack and yearn for, even if getting there goes against all they have been taught and are supposed to believe. The backstory with Cathleen is a bit generic and by the book (girl from a broken home with a deadbeat father and struggling mother goes after her dream against her mom’s wishes… does this sound familiar?) but this thankfully does not detract from a powerful performance and story.

The absolute greatest strength of Novitiate is that it is an eye opener to the Catholic Church’s history, and just how brutal and strict the regiment to become a nun was in the past. We see scenes of girls having to pour their faults and shame out in front of one another under a seemingly merciless teacher, the penances they must endure for minuscule offenses, and even the ways that these girls have to cope with obstacles and seek solace in one another. Prior to seeing this film, I thought that nuns were just kindhearted women who helped out on behalf of the church… never would I have guessed that the path to becoming one would be a “boot camp” of sorts!

Likewise, the film also intrigues with its information on Vatican II, what it entailed, and how it forever transformed the church. Leo’s Mother Superior character initially refuses to give in to these changes, seeing the church, despite its strict and often brutal past, as perfect, but is forced to relent due to the intervention of her superiors. Witnessing this woman’s downfall as a result of these new church policies is a powerful series of sequences, and the film’s epilogue shows just how powerful an effect the Vatican II decisions had on the established church order.

The film, despite its powerful presence, suffers from some pacing issues. The biggest issue with Novitiate is its run time of just over two hours; It could have been 15-20 minutes shorter with a few edits and excising of certain plot elements. In many ways I found myself wondering if the tale of the nuns and the story of Vatican II could have been two separate films. The movie focuses primarily on the day-to-day life of nuns in training; while there are polarizing moments and images that will leave an impact on any viewer, the majority of the film is concerned with daily routines and such. For the most part, these issues do not work against the film, but one should be forewarned that getting the most out of the film does require patience; this is not a film with "action scenes" around every corner.

Another minor complaint (which has nothing to do with my enjoyment of the film itself) is its title. No one knows what “Novitiate” means, except perhaps the most devout of Catholics, and no average person knows how to pronounce it. Likewise the title tells a casual “newbie” viewer nothing about the film. “Vatican II” would have been a better title for the film.

Maggie Betts’ Novitiate is an absolutely polarizing directorial debut, which feels like the work of a far more experienced director. While the movie does suffer from some excessive subplots and characters, it serves as a powerful look into Catholicism and the struggles those training to be nuns went through, as well as the impact of Vatican II on those who had long been serving God and the church. It is a “slow burn” film that requires patience to enjoy, but those with an open mind who give it a chance, religious or not, will find Novitiate to be a powerful viewing experience.

DISCLAIMER: All image in this review are the property of their respective copyright holders, including (but not limited to) Sony Pictures Classics. For promotional use only. All rights reserved.

Wonder - A Heartwarming Film With an ...

The Breadwinner - A Powerful Animated Tale ...