The Florida Project follows the life of single mother Hailey and her daughter, Moonee, who live in a rundown Florida motel. Living in poverty, Hailey must do what it takes to help make ends meet and try to me a good mother to her daughter, despite Hailey’s obvious bad influence. Moonee sees the world from a different perspective, going on adventures with friends, oblivious to the unfavorable circumstances around her. Throughout it all, they have a love-hate relationship with their neighbors, as well as apartment manager Bobby.

The Florida Project is a film that is unlike many others of recent years, in that it covers the plight of lower-class people and their struggles in day-to-day life, just to make ends meet. The film opts for a “slice of life” approach rather than a traditional narrative, with very little plot, though this does not work against the film. The film is simultaneously ugly and beautiful at the same time, with gorgeous cinematography and fantastic true-to-life performances, but also one that will get viewers thinking and wondering about what they have seen when the movie ends. The editing and transitions are a bit jarring and overwhelming, and the movie is too long, with a questionable ending, but it does not change the fact that the film stands as essential viewing. 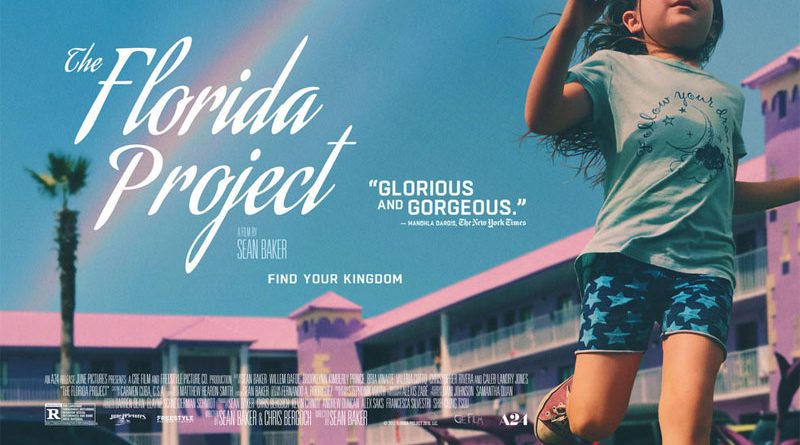 The single greatest strength of The Florida Project? The characters in the film actually LOOK AND ACT LIKE REAL PEOPLE. Filmed on location in living conditions that are less than stellar, this is a believable environment. No one in the movie looks like a movie star or a celebrity. In fact, aside from Willem Dafoe, the cast is mostly made up of unknown, up-and-coming actors and actresses. I also praise the writers for not making the movie a star vehicle for Dafoe; he is in the movie just the right amount, and gives a fantastic performance. No one is glorified here; Bria Vinaite as Halley is simultaneously detestable and a terrible influence on her child, yet also a loving mother, beautifully riding a balance between the two extremes as she represents an all-too-real struggle in a poor economic climate and location.

But the best performances in the film come from the kids, in particular, Brooklynn Prince as Moonee. She brings an innocence to this role, showing us the world from her perspective, a far cry from her mother’s disenfranchised world view. Many of the scenes with the kids interacting feel ad libbed and natural, even unscripted (it’s not clear if this was the case, though). When Moonee does bad things, it feels like it is authentically due to her mother’s influence; at no point do scenes of Moonee cursing, twerking, burping, taking bathing suit selfies, or giving the finger to police helicopters feel like they are being played for cheap laughs. The performance is one of the best of the year, and gives viewers many things to think about, including if she will grow up to be like her mother, or if she will have better odds for her future.

The structure of the film is unlike most major films in that it does not have a traditional “Point A to Point B” narrative; it instead opts for a “slice of life” style that does not put heavy emphasis on a plot. This actually works to the film’s advantage, giving parts of it something of a faux documentary feel.

Even the cinematography is surprisingly good for a film of this style. Throughout the movie, every inch of screen space is used, taking full advantage of the wide aspect ratio. Whether it is the hotel/apartment buildings, establishments, natural outdoor settings, or anything in between, each frame of film is visually appealing in its own way. I questioned whether a film like this needed the wider aspect ratio, but became a believer after seeing the film.

Okay, as much as I love The Florida Project, there are a few things about the film that simply do not work. The “slice of life” structure works well, but sometimes the scene transitions are too jarring and undeveloped. We can go from something dramatic and gripping to something completely the opposite end of the spectrum, lighthearted and funny, and these moments don’t flow as well as you would hope. Additionally, the film loses some of its impact from the redundant nature of certain scenes. The film would have had a stronger impact had it been about 30 minutes shorter, and more tightly edited.

The other weakness is the ending. This ending feels rushed and makes little sense, not to mention it comes at the worst possible time, with other plot developments we are waiting for resolution on, but ultimately never get. The look, sound, and feel of this scene betray the rest of the movie, as well. It leaves the viewer wanting resolution, and just feels strange.

Despite some minor shortcomings, namely its overlong run time, choppy editing and tone, and weak ending, The Florida Project succeeds more often than it falters. Brooklynn Prince steals the show as Moonee, and Willem Dafoe gives a fantastic supporting performance as Bobby the apartment manager. The gritty realism highlights a segment of the American population too often neglected by cinema. Flaws aside, this is a powerful film bound to invoke different interpretations and questions from viewers. Recommended viewing.

DISCLAIMER: All image in this review are the property of their respective copyright holders, including (but not limited to) A24. For promotional use only. All rights reserved.