Home›Movie Reviews›Roman J. Israel, Esq. - A Great Performance From Denzel Washington, But Not Much Else....

Roman J. Israel, Esq. - A Great Performance From Denzel Washington, But Not Much Else....

Socially awkward Roman J. Israel, Esq. has long been an attorney, working “behind the scenes” for his law partner over the course of over three decades. But when his partner is hospitalized following a heart attack, Roman must take a job with ambitious young attorney George Pierce, to make ends meet, despite clear animosity between the two men. As the weeks pass, Roman finds himself struggling to fit in at work, juggling multiple cases, developing a friendship with a civil rights worker, and contending with his own personal moral choices.

Roman J. Israel, Esq. features a fantastic performance from Denzel Washington, though sadly not much else. The film features one of the most convoluted and inconsistent narratives of recent memory, with far too many undeveloped subplots and rushed plot elements. In addition to many scenes that are completely unnecessary and do nothing to advance the plot, you get the impression that the filmmakers did not even know what genre of movie they were making, and it ends up feeling like an uneven compromise throughout its two-hour duration (and this is following edits that were made to the film after its initial premiere!) 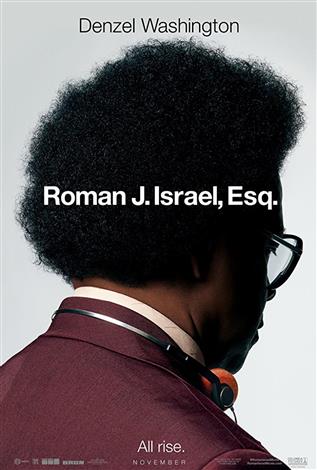 As far as the one glowing and positive element of the film, Denzel Washington shines in his performance as the titular character. Socially awkward (possibly autistic) but knowledgeable, he steals every scene he is in. Whether a scene is unintentionally funny due to his behavior or he is passionately pursuing what he wants, this is Washington at his finest.

Unfortunately, outside of Washington’s superb performance, little else in the movie works. There are whole scenes that add nothing to the plot of the movie, which are seen and then never referenced again. The film hints at a potential romantic subplot, but so little emphasis is placed on it that when the female lead begins pouring her heart out to Roman, it doesn’t feel believable due to a prior lack of development. The inconsistent tone means we get everything from a montage that feels more like it would have been at home in a comedy, to a frustratingly bleak ending that tends to undermine much of the rest of the movie. And did I mention that the filmmakers were so unclear of what kind of movie they were making, they even threw in a car chase which gets no explanation whatsoever?

Another critical mistake is that the Roman character’s past is never explored aside from a few pictures and spoken passages of dialogue here and there. It is clear he was once an idealist, and had a strong relationship with his law partner of over 30 years. But once more, these things are cast aside. Exploring this material rather than unnecessary scenes that failed to advance the plot would have made for a more fulfilling film.

Roman J. Israel, Esq. features a fantastic Denzel Washington performance, but the rest of the movie feels slapped together, undeveloped, overlong, and uninteresting. Is it a comedy? Is it a drama? Is it a thriller? I don’t know, and neither did the people that made the film. When it is released on home viewing formats, it will make for a decent weekend rental title, but do not rush out to see it in theaters.

Rating: Two out of four stars (my actual rating is closer to one-and-a-half stars, but I am bumping it up half a star due to Washington’s performance).

DISCLAIMER: All image in this review are the property of their respective copyright holders, including (but not limited to) Columbia Pictures and Sony Pictures Entertainment. For promotional use only. All rights reserved.

Thank You For Your Service - What ...