Ferdinand – Is the Latest From Blue Sky Studios a Cash Cow, or a Load of Bull?

Ferdinand the bull is born and raised in Casa del Toro, a place where bulls are trained to one day enter the arena with a bullfighter. Being someone who would rather stop and smell the flowers (quite literally), young Ferdinand runs away from Casa del Toro and is adopted by a loving family. But when his curiosity gets the better of him and he unintentionally wreaks havoc in his village, he is sent back to Casa del Toro, still loathing the idea of going into the arena with a matador. Upon discovering that bulls not chosen to go to the arena go to the slaughterhouse, it is up to Ferdinand to escape with his friends, back to his loving family.

It seems like we get countless CGI-animated family features every year these days, and in this endless sea of them, there are so few that have any staying power. While I would not call Ferdinand is an instant classic, or say it approaches the work of Pixar or even the better Dreamworks Animation films, it is still several notches above what other studios are churning out these days, and is a quality piece of family entertainment. 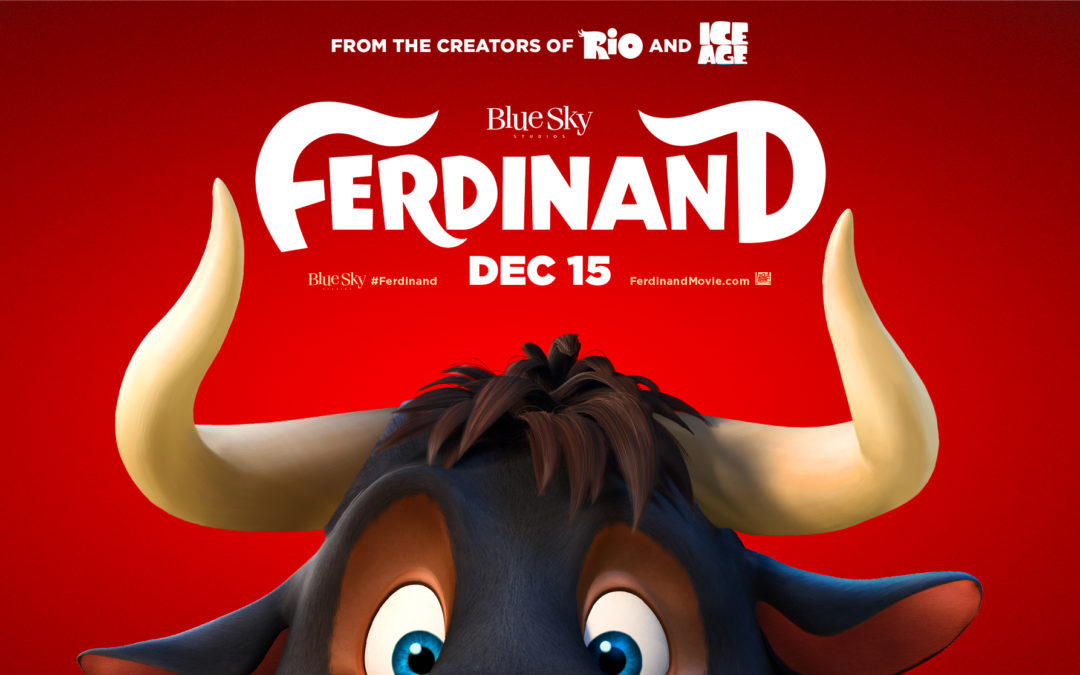 One of the real surprises here is WWE wrestler John Cena in the role of Ferdinand. This guy is the last one I would expect to perform the lead voice in a kids/family film, but he does a surprisingly good job, covering a wide range of emotion throughout its duration. Any fears you may have about the casting of Cena being used to sell the movie are unfounded; he fares surprisingly well here.

The rest of the cast fares nearly as well, including Kate McKinnon as a friendless, aging goat, and David Tennant as a Scottish bull. The cast is surprisingly large for a film such as this, and sadly, many of the tertiary characters do come off as one-dimensional, one-joke personae, with overly stereotypical character depictions and actions, although some of these moments are still quite comical. Fortunately, everyone in the movie throughout the story has good chemistry, and the interactions between all characters, positive and negative alike, are handled well. From emotional and dramatic scenes to the more lighthearted and comedic, Ferdinand has a quality cast that shows in nearly every scene.

One of the biggest complaints I have with family/kids films these days is that there is a mess of hit-and-miss slapstick and an overabundance of toilet humor. While Ferdinand definitely goes for physical gags in many scenes, this is one of the few films where they actually work, because said gags are actually funny. A major stand-out scene is Ferdinand being sent charging through the village following a bee sting; the lightning-fast nature of the physical gags that ensue is surprisingly effective, including a literal “bull in a china shop” scene that feels like something that would have been at home in a Marx Brothers comedy. Ferdinand is not going to be revered as a “classic of animation,” but it’s at least a GOOD movie, and that is more than I can say for the messes other studios have been cranking out in recent years. While the movie was clearly made with kids in mind, adults should enjoy it as well.

I can’t quite rate the movie as high as the better works of some of the other studios, though, namely the better works from Pixar and Dreamworks Animation. While the movie mostly stays true to its classical Spain setting, there are few bad moments of “modern-ness” that do threaten to derail the movie on a few occasions. Considering the original source story came out in the 1930s, the filmmakers should have kept the story in that time period. As a result, we get a few obnoxious scenes including an over-the-top “dance-off” (yes, with animals) with modern-style dance music, and even a “flower” toy that plays the “Macarena” song. At just under 110 minutes, the run time is a bit excessive, and probably would have benefited from about 10-15 minutes worth of edits, particularly in its midsection, though I would not really call any part of the film overly “boring.”

Ferdinand is not perfect, but still fares better than much of the work coming from animation studios these days, largely due to its colorful cast of characters, and a nice blending of comedy and more dramatic scenes. And unlike many other animated films, the more comedic moments actually work. John Cena fares surprisingly well voicing the titular character. It isn’t the best animated film released this year, but fares considerably better than what we have been getting from many of the other studios. If you are looking for quality entertainment for the whole family, Ferdinand is worth seeing.

DISCLAIMER: All image in this review are the property of their respective copyright holders, including (but not limited to) Blue Sky Studios and 20th Century Fox. For promotional use only. All rights reserved.