The Welcome to My Nightmare album represented a major change in Alice Cooper’s career, in that it was the first release to separate him from his classic band, with whom he had recorded his first seven records. Despite that, the 1975 release became revered as another classic for Cooper, featuring many iconic songs, not the least of which being the legendary title track.

This DVD release compiles two previous Alice Cooper releases, Alice Cooper: The Nightmare from 1975 (here on DVD for the first time), and the Welcome to My Nightmare concert film from 1976. 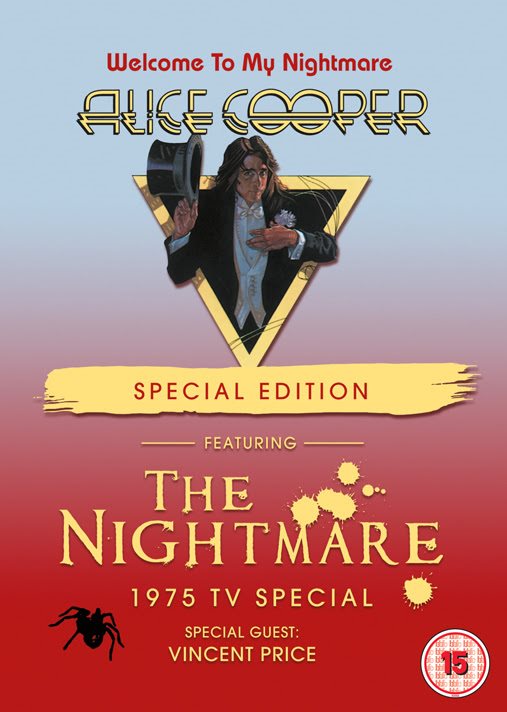 Alice Cooper: The Nightmare originally aired on television in 1975, following the release of the Welcome to My Nightmare album. The special was a novel concept in the pre-MTV era, showcasing video content to go along with every track from the recently-released record, even including a guest appearance from iconic horror actor Vincent Price.

The Welcome to My Nightmare concert film came out the following year. Cooper’s stage shows had been the stuff of legend up to this point, and even with the disbandment of his classic band, he managed to impress audiences with further and more elaborate theatrics, continuing to garner a growing fanbase, shocking young and old alike. Curiously, on this DVD, the concert film is listed before the TV special despite coming out later; it is as if the concert movie is the "featured" attraction here with the TV special being a bonus feature. This approach is debatable and questionable, but this fan is happy just to have them both in one place.

For an Alice Cooper fan, this DVD set will be a must own. Picture quality is admittedly on the weak side due to the nature of the material, but these are essential events in Cooper’s career that belong in every collection. The Nightmare is a fantastic television presentation that further cemented Cooper’s spot as one of the biggest rock and roll stars of the era, with a combination of shocking theatrics and killer music, and the guest spot from Vincent Price only adds to the atmosphere. The live follow-up included here is equally impressive, though words don’t do Alice Cooper’s stage show justice. Do I even have to say it? If you are fan of the Coop, it is unlikely you’ll be disappointed with what this DVD set offers.

Beside Bowie - The Mick Ronson Story ...