CES. AVN. It's always an interesting time in Sin City when these conventions are in town during that post-holiday lull. For those who don't know, CES is the Consumer Electronics Show and AVN stands for Adult Video News, a trade journal that covers the Adult Video Awards.

This year there was a twist to the entertainment; the introduction of robot strippers. Yes, you read that right. Robot strippers. Sapphire Las Vegas presented them: R2DoubleD and TripleCPU, fully animated electronic twins from London, England. They made their Vegas debut at the World's Largest Gentleman's Club.

There was a pretty good-sized crowd to take this in, other paparazzi around, free drinks flowing, and complimentary donuts by Pink Dot were at the ready. After the introduction to bring the crowd up to speed on the what and why, the androids took the stages in the middle of the floor.

Was it impressive? Sure. The way the auto parts and camera heads were assembled. They certainly moved liked human strippers, as much as possible anyway. Was there true sex appeal? Not to me. But I suppose if you're really a techy nerd it might arouse you. and/or if you'd rather not deal with the verbal come-ons of real female strippers designed/trained to empty your wallet and drain your bank account(s). 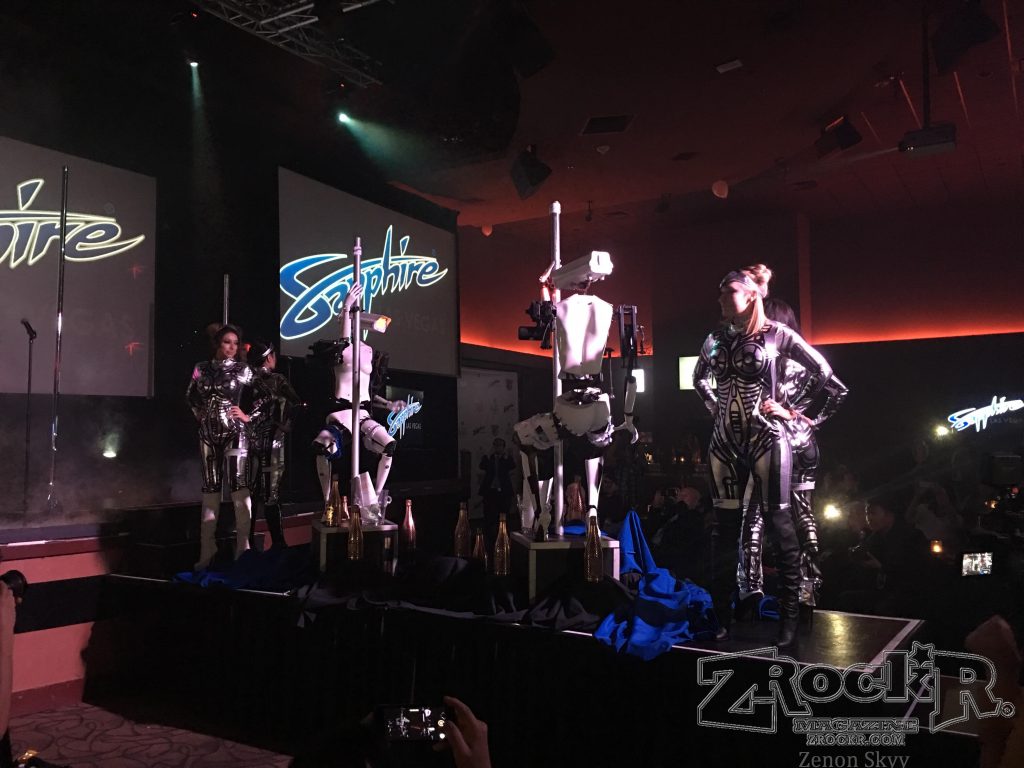 As expected, after awhile, the regular ladies were unleashed. Probably mostly for the crowd gathered to do a comparison.

How did this all stack up? In summary, I suppose it was simply inevitable that technology would meet opportunity and this would be introduced. Do I think that it's the wave of the future? Will all strip clubs eventually be overrun with these just like pervasive technology is replacing cashiers, brick and mortar businesses, true intimate human communication, etc.? No. I think it's a curiosity that will find a niche market and that's about it. But to each their own. I'll stick with the real thing. That is if I even GO to a strip club, which I quite rarely do, because I know the game, especially these days.