Home›Movie Reviews›Maze Runner: The Death Cure is the Final Film in The Saga.... And That's For the Best.

Maze Runner: The Death Cure is the Final Film in The Saga.... And That's For the Best.

Following the events of the previous Maze Runner film, our heroes launch an effort to rescue those being held prisoner by the WCKD organization, only to find that captive friend Minho is not on the train their ambushed. Forming an alliance with rebel soldiers under the mysterious infected Lawrence, they infiltrate the “Last City,” doing what it takes to take down their enemies and rescue their captive friend, all the while dealing with unexpected obstacles, and doing their part to avoid becoming infected and zombified.

If you would like to know why people no longer go to the movies like they once did, go see The Death Cure. Or better yet, don’t go see it. At a frustratingly long 140 minutes with a plot that compiles every action and sci-fi movie cliche known to man, coupled with one of the most one-dimensional casts of characters this moviegoer has ever seen, the film is a complete disaster on nearly every front, despite some solid effects, makeup work, and action sequences. 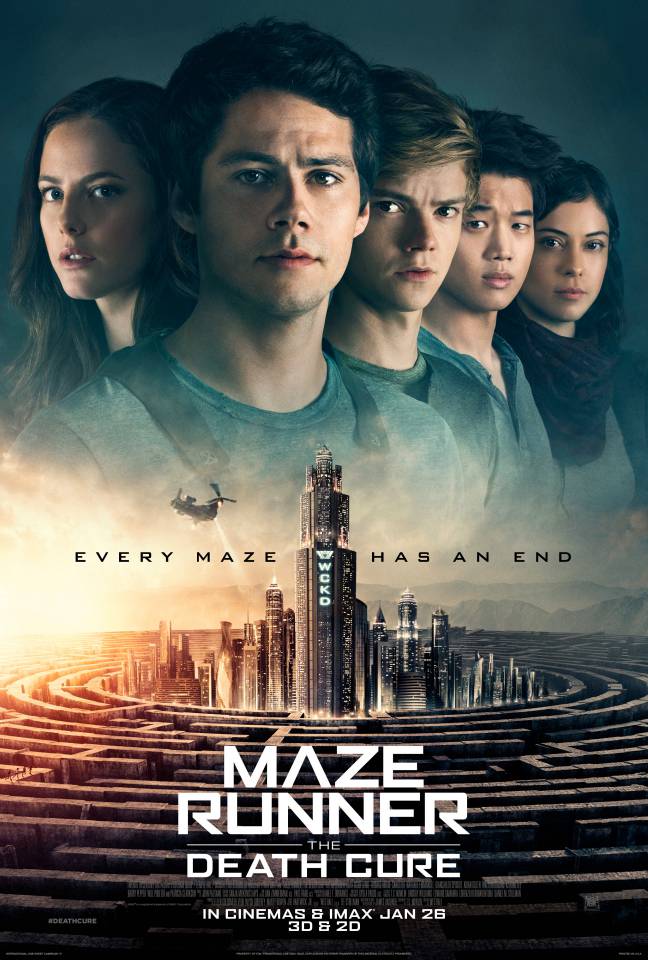 The positives are limited, but they are there. The film opens with a riveting action sequence featuring our heroes pursuing a train to rescue those held captive by WCKD. This is the way to start a movie, if nothing else. Makeup work, particularly on the infected, is quite good. The Lawrence character is particularly scary, with facial makeup that seems to draw inspiration from Lon Chaney’s version of The Phantom of the Opera. The young cast is quite talented and makes the most of what they have.

So what went wrong?

Just about everything else.

Feeling like a mash-up of everything from The Hunger Games to the rebooted Planet of the Apes series, and countless other things, this is a story that is nothing new, and shamelessly borrows from other better stories, doing it to a lesser extent. One scene in a building looking out a window onto the Last City looks ripped out of Blade Runner. The movie even throws in an unnecessary “spooky tunnel” scene of the infected, complete with unnecessary jump scares. Attempts at humor are few and far between, falling flat each time, leaving the movie with a bleak tone that does not offer much in the way of enjoyment.

It does not help that the characters behave foolishly throughout the film, basically falling into all of the "stupid movie character" pratfalls. In one scene, two characters have disguised themselves and evade detection from a major villain that shares an elevator with them. And when they go around the corner a few moments later, they take their masks off - and are promptly discovered by the villains. Even a scene of a character battling a long-time friend that has become zombified feels so campy and silly that it would be appropriate content for an MST3K episode.

Arguably the biggest flaw of The Death Cure is that, despite a large cast, all of the characters are one-dimensional and interchangeable. The cast includes Brown Haired White Guy, Black Guy, British Accent Guy, Guy Who Says “Hermano” a Lot, Asian Guy, Evil Executive Guy, Traitor Girl, Rogue Zombie Guy, and many others. The characters literally have no traits or personalities of their own beyond the descriptions I have just given. And somehow they retain the perfect appearances of teen idols despite a literal end of the world in which there aren't likely to be any beauty shops still up and running.

Did I mention this goes on for nearly two-and-a-half hours? The film has no depth and is not original at all. It feels like the filmmakers and crew threw every dollar they could into this film for the sake of big, exploding buildings and other elaborate setpieces, but they left out the human element. It hits every conceivable cliche, from characters in no-escape situations being rescued at the last moment (on several occasions) to conflicted love stories, characters finding redemption, and a storybook happy ending that feels more obligatory than authentic. Nothing in the movie feels earned or like a reasonable outcome. I imagine with more fleshed out characters and edits, this could have been a great “under two hours” movie. As is, it’s bloated.

Hollywood has become oversaturated with inferior films based on young adult novels, and this is the latest in a long line. When will it end? If you want to spend two-and-a-half hours starting at a screen with one-dimensional characters, an all-too-familiar plot, cliches galore, and lots of big explosions, The Death Cure will suit you well enough. Those who want a little more depth to their entertainment will not find The Death Cure to be a suitable cure for the common movie, though.

DISCLAIMER: Images seen here are the property of their respective copyright holders, including 20th Century Fox. For promotional use only. All rights reserved.

THIS IS YOUR CHANCE TO SEE SANTANA ...