Home›Movie Reviews›Pad Man - Dramatic and Hilarious Indian Film is One of the Year's True Surprises!

Pad Man - Dramatic and Hilarious Indian Film is One of the Year's True Surprises!

Pad Man is directed by R. Balki, and stars Akshay Kumar, Sonam Kapoor, and Radhika Apte. It is based on the short story, "The Sanitary Man of Sacred Land," from Twinkle Khanna’s book, The Legend of Lakshmi Prasad, which was derived from the true story of Arunachalam Muruganantham. The film is in the Hindi language, and subtitled in English for American audiences.

Lakshmi Prasad is a married man in a small Indian village, living with his wife, mother, and siblings. When he notices the hardships women must go through on their period, he tries to invent a low-cost alternative to the horribly overpriced sanitary pads that are exceptionally difficult to get in his village. Unfortunately, due to the taboo nature of the subject, he is written off as a pervert by everyone, including his family. Leaving his village, he seeks a way to make his vision of affordable sani-pads for the women of India a reality.

Pad Man is the story of a man from India that invents low-price sanitary napkins for women. At first glance, this may sound like an odd and even boring choice for a story with so many other movie choices that worldly audiences have. This movie ended up being a pleasant surprise of the best kind. Pad Man is simultaneously heartbreaking, dramatic, and hilarious. It gives audiences a hero that most overcome adversity, and sticks to his dream despite the ridicule and outright humiliation he suffers along the way. Do not let the subject matter of the film deter you; the movie is surprisingly entertaining, with a slightly overlong run time being its only noticeable flaw. 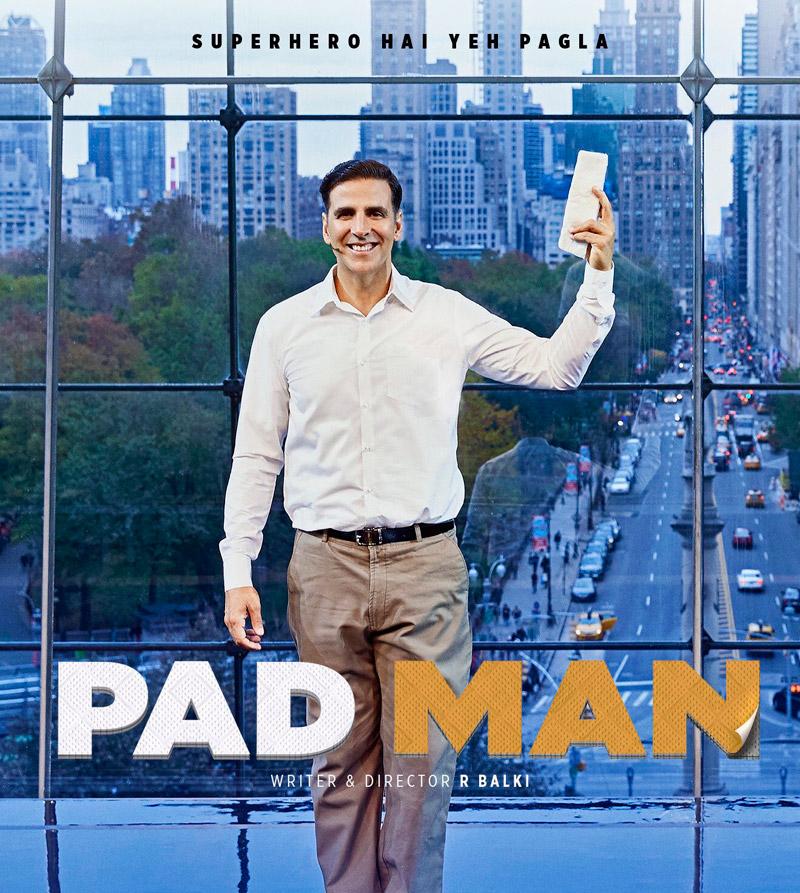 There is not enough praise that can be given for for Akshay Kumar in his role as our hero, Lakshmi Prasad. His sheer devotion to his dream and how he goes about accomplishing it is entertaining in more ways than one. This is a man who goes from being berated and declared a pervert for trying to fulfill his goals, to someone that gains national and international recognition for his journey to bring a low-cost sanitary pad to the women of India. The means he will go to in order to accomplish his goals are even more entertaining and outright laughable, particularly when he asks for “feedback” on the pads from his “customers.” Throughout it all, he remains motivated and true to his morals and nature as a good man; he is not a man that simply wants to “make money” doing this. In this depiction, he is a superb protagonist that audiences will laugh and cry with alike. The supporting cast fares nearly as well, whether they are praising Lakshmi, or are writing him off as perverted.

The movie also does a startling and surprisingly effective of showing just how unsanitary and behind technologically India was at the time of the film, roughly around the turn of the millennium. Women on their periods do not have access to things women in the Western World take for granted, and must spend days on end sleeping outside the house, using filthy rags for sanitation that could cause infections that make their problems far worse. Likewise, Lakshmi sees a computer and Google for the first time, and is overwhelmed and in awe of it. Moments like this make the film all the more powerful.

If there is one minor problem with this otherwise stellar film, it is the excessive run time of 140 minutes, and that the film drags on slightly longer than necessary when it could have ended on a higher note a few scenes earlier. Instead, the ending comes off as slightly melodramatic and disappointing, but this is hardly a flaw in what is one of the finest films to come out of India this year so far.

Pad Man is a surprisingly entertaining film despite its bizarre subject matter, with a memorable protagonist, a powerful true story, and a look at the unsanitary, developing conditions of Indian villages just a short time ago. The film is highly recommended.

CONGRATS TO THE WINNERS OF THE THEORY ...