The Room – A Look Back at Tommy Wiseau’s Unintentionally Hilarious Cult Classic Film!

The Room is directed by Tommy Wiseau. The film stars Wiseau, Greg Sestero, Juliette Danielle, Philip Haldiman, and Carolyn Minnott. The film was initially released in 2003.

Johnny is a successful banker and is engaged to the beautiful Lisa. However, Lisa has grown bored of life with Johnny, and seduces his friend Mark. Before long, she is spreading accusations of Johnny being unfaithful and abusive, and a rift forms between Lisa and her friends from these accusations and her manipulative ways. Will Johnny and Lisa get married, with love conquering all, or will the relationship fail?

The Room is a monumentally bad film with its unconventional storytelling and fallacies. The acting, particularly from Wiseau, is atrocious. Subplots and story elements are brought up once and never get mentioned again. The camera is out of focus in some shots. Characters’ personalities and motivations change without explanation, often within the same scene. There is a ridiculous amount of San Francisco stock footage. Scenes are shown out of order. In many cases, footage is obviously reused. Characters disappear and are sporadically replaced with totally new ones. The film essentially feels like soft-core porn on more than one occasion, and the acting really isn’t any better. 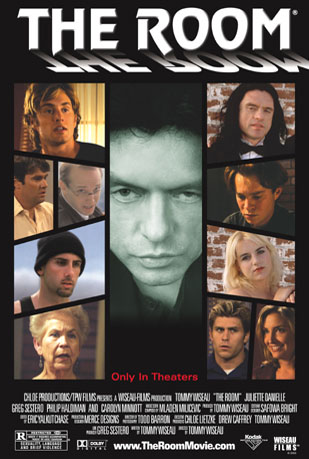 The story behind the making of the film is perhaps more interesting than the movie itself. The eccentric Tommy Wiseau, whose origins and the source of his wealth remain the stuff of mystery, put up $6,000,000 to make the movie. His unnecessary spending included purchasing filmmaking equipment rather than renting it, filming simultaneously on traditional film cameras and HD digital ones, constructing unnecessary sets for scenes that would have looked better and been far cheaper to shoot on location, and repeatedly firing his crew and hiring new personnel. Co-star Greg Sestero wrote a book regarding his experiences meeting Tommy and making the film, The Disaster Artist, which has since been turned into a film directed by and starring James Franco (and believe me, that film is far better than this one!)

The film is so laughably bad in its execution that writing a conventional review for it is virtually impossible. It was clearly intended to be a serious drama, but the poor filmmaking ultimately resulted in it being billed as a “black comedy.” Of course, we all know that it is simply a poorly-made drama. And yet, despite its sheer horridness, the film is still worth watching for all the “classic” moments it presents. Many of Wiseau’s moments of overacting and just plain getting scenes wrong, from his denial of accusations of domestic abuse, to laughing at a story of a woman being beaten, or randomly asking about a friend’s sex life mid-conversation for no apparent reason, are far funnier than most movies that are intentionally comedic. I should hate this film; it is poorly made and atrocious in more ways than one. But with all of the laughter it has brought me, can I possibly write a negative review for it? The Room is terrible, no questions asked. But its “so bad it’s good” quality stands as a saving grace. Any film fan should watch it once. 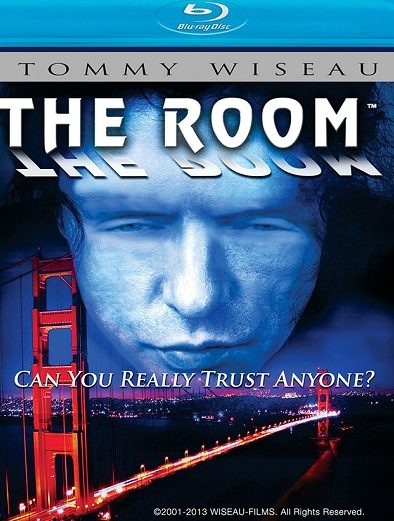 The Blu-ray release of the film looks decent, but does suffer from some digital noise and artifacting in places, which are noticeable and unwelcome distractions, though many other scenes look far better. A few moments, including an infamous scene with a camera out of focus, are the fault of the filmmakers and can never be fixed by any about of processing or remastering. Bonus features on the disc include some deleted/alternate scenes, and a handful of interviews with Tommy Wiseau, which are admittedly just as funny as anything the film itself offers.