Home›Reviews›Y&T Strikes Back with their Acoustic Classix Vol. 1 EP!

Y&T Strikes Back with their Acoustic Classix Vol. 1 EP!

For over four decades, the band once known as Yesterday and Today has been rocking audiences. Y&T, fronted by its sole surviving classic member, vocalist/guitarist Dave Meniketti, continues to tour and entertain fans around the globe. Sadly, we have not gotten a new studio album from the band since 2010, with the only major release from the group in recent years being a double live album in 2012.

The band, which now teams Meniketti up with bassist Aaron Leigh, guitarist John Nymann, and drummer Mike Vanderhule, has surprised audiences with their latest, unexpected release, with is an EP of six acoustically-recorded songs. Acoustic Classix Vol. 1 is the first official release from the group following the aforementioned live album (not counting reissues). But is this something fans will want to add to their collections? 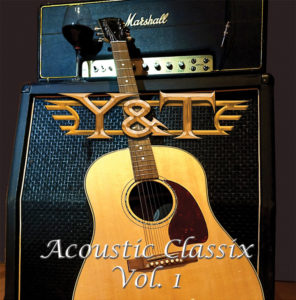 Acoustic Classix Vol. 1 basically delivers what it promises, and that is not a bad thing. Six Y&T classics are given the unplugged treatment here: “Contagious,” “Rock N Roll’s Gonna Save the World,” “Summertime Girls,” “Black Tiger,” “Barroom Boogie,” and “Rescue Me.” It is a nice mixture of tracks, and it is good to see the band doesn’t simply copy the studio originals, or go predictable with the tracklist. The band sounds surprisingly good; Dave Meniketti in particular continues to shine well into his 60s. What we have here is a great selection of Y&T tunes, done up by the modern version of the band, which continues to push on and keep the sound alive.

Longtime Y&T fans will be impressed with what this package, brief as it may be, offers. The “Vol. 1” in the title has this rocker optimistic for future unplugged EPs, so let’s keep out fingers crossed for more! No one should be disappointed with this release from one of rock’s finest and longest enduring bands.

Black Panther Bares His Claws in One ...