The Insult is directed by Ziad Doueri. The film stars Adel Karam, Kamel El Basha, Rita Hayek, and Camille Salameh. The film is in Arabic and French, and subtitled in English for American exhibition.

Tony, a Christian Lebanese man, butts heads with Yasser, a Palestinian refugee, following repairs that were done on Tony’s apartment balcony against his will, to fix an illegal drain installation. When their tempers flare and Yasser refuses to apologize and punches Tony, breaking his ribs and making his daily routine next to impossible, he takes Yasser to court. It is not long before the lawyers become the frontrunners and the case, which stemmed from a simple misunderstanding, spirals out of control, becoming national news, and igniting prejudices between Christians and Palestinians.

The Insult is a film that shows the ugliness of prejudice and racism firsthand, highlighting the ways that, even well into the modern age, it tears nations apartment. The characters in the film are fully realized and three dimensional, and the way the events of the film are quickly blown out of proportion to the point of rioting and national controversy go to show this firsthand, in the most graphic and detailed of ways. 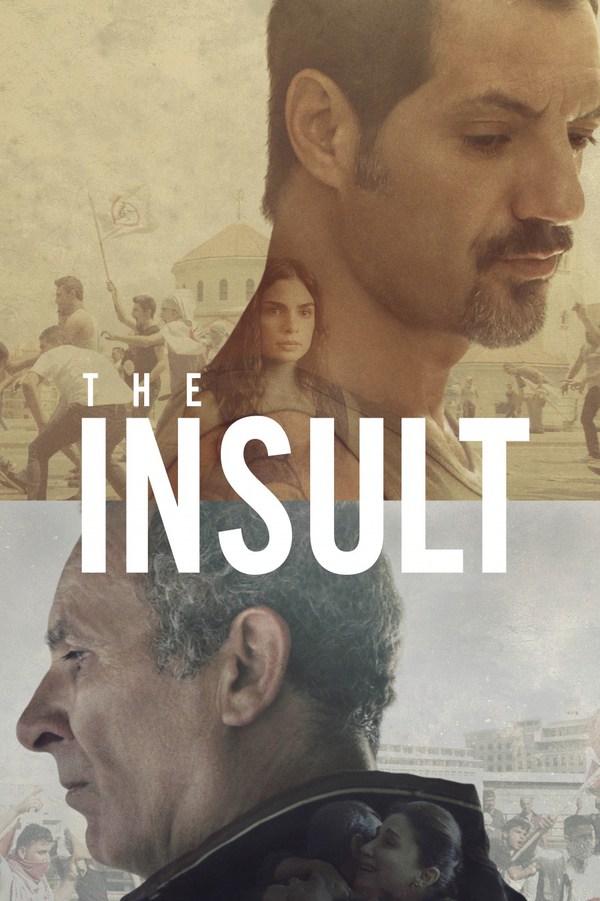 The two leads in the film are definite standouts. Tony, the Lebanese Christian, is a garage owner who is married, and expecting his wife to soon give birth. He is a traditionalist who values his way of life, and takes the events on his property as an insult, demanding an apology. On the other hand, Yasser is a skilled employee and a hard worker, but his stubbornness and pride prevent him from offering the recompense that Tony seeks, ultimately leading to the courtroom trials. The chemistry between the two leads is a definite highlight throughout the movie, including their interactions following the beginnings of the trial, in which neither one is a clear-cut “hero” or “villain.”

The supporting cast is no less excellent, including Rita Hayek as Tony’s wife that is due to give birth, and wants nothing more than for their child to have a happy, healthy wife, and Camille Salameh as a fast-talking lawyer who steals every scene he is in. In fact, one of the strangest and most powerful things this movie does is that it paints Salameh’s lawyer character out to be far more villainous and prejudiced than either of the leads, further painting a picture of the conflicts at hand and how volatile the situation becomes. It is a movie that needs to be seen for these reasons.

There are a few minor issues with the narrative that keep the film shy of perfection, namely a subplot regarding the birth of Tony’s child and the aftermath; this tends to get cast aside in the latter half of the film and forgotten. The film also seems to expect its audience to have some knowledge of the background/conflicts/etc. in this region of the world at the time, which may confuse those coming in to watch the move that are not familiar with the plights in question.

Overall, The Insult impresses with its brutal honesty and message against the horrors and dangers of prejudice, even where the narrative lags. But the positives outweigh the negatives; it remains a polarizing film that any fan of realistic, dramatic fiction needs to see.

The Insult is not rated by the MPAA, but my recommended rating is PG-13 for thematic elements, strong language, and scenes of realistic violence and rioting.

DISCLAIMER: All images featured in this review are the property of their respective copyright owners, including Ezekiel Films, Tessalit Productions, Rouge International, and Diaphana Films. For promotional purposes only. All rights reserved.