In ancient times, a rabbit-hunting tribe of cavemen is forced off their land by men armed with bronze weaponry, forced to take refuge in the neighboring badlands. When Dug, of the caveman tribe, finds himself in the walls of the bronze city, he makes a challenge to their Lord: If they can beat the bronze city’s soccer team in a match, their valley will be returned. But if they lose, they will be condemned to work in the mines for the rest of their days. Joining forces with a beautiful girl from the bronze city who is forbidden to play professional soccer due to her gender, Dug sets out to teach the sport to his tribe so that they may reclaim their home.

Aardman Animations productions are immediately recognizable for their stop-motion claymation work, and the distinctive, distorted appearances of the characters. Best known for the Wallace and Gromit cartoons and their feature-length film debut, Chicken Run, the studio’s work has long been beloved around the world by kids and adults alike. Early Man isn’t going to win any points for originality, but it is sure to get plenty of laughs and smiles from all audiences that see it. 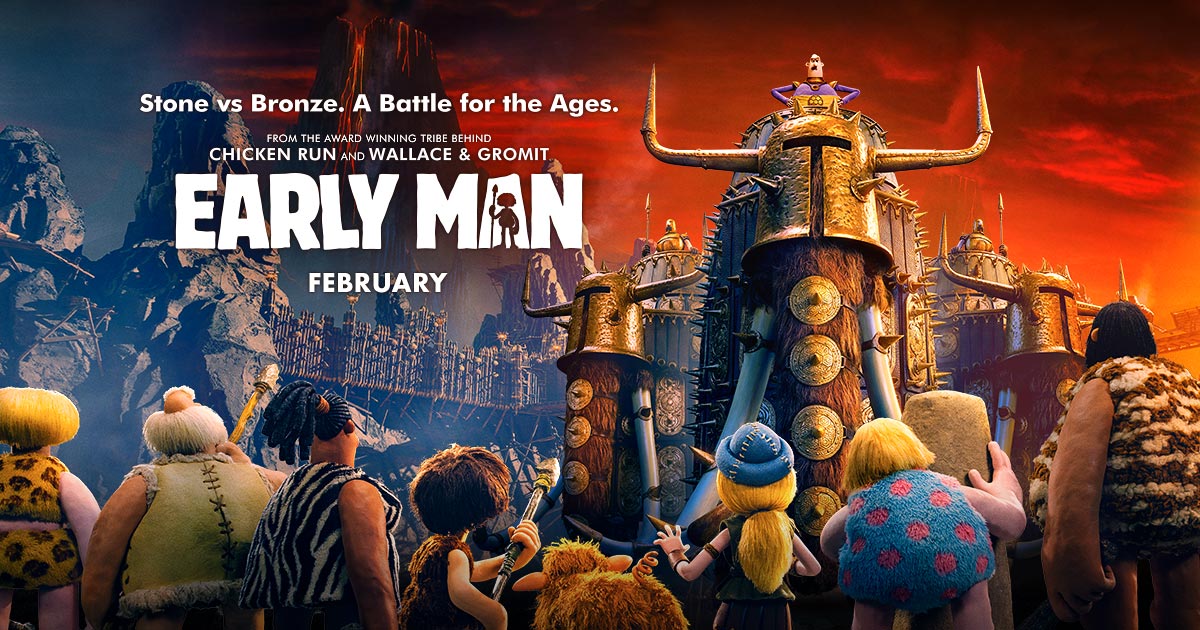 The characters, plot, and overall story and execution in Early Man are not exactly fresh or surprising, but everything comes together nicely. The Aardman Animations character designs lend themselves well to caveman characters, and they do a nice job using their signature techniques to bring this ancient world to life, albeit with their own twists. The movie is entertaining just to look at; you can tell the animators and artists had a lot of fun making the film.

The movie’s voice cast proves to be ideal, including Tom Hiddleston (Loki in the Marvel Cinematic Universe) doing his best French accent as the film’s primary antagonist, who steals the show in every scene he is in, giving the film’s best performance. The rest of the cast fares well, including Eddie Redmayne as hero Dug, and Maisie Williams as the bronze city woman he joins forces with in an effort to teach the game of soccer to his friends, so they may win back their valley.

The overall execution of the film is surprisingly well done. Aardman always scores points for their more subtle approach; they do not go for pop songs that will be dated in a few years, ridiculous over-the-top jokes, and the keep the gross out humor to a comfortable minimum. These things are true in Early Man, and it is one of the elements that keeps the film enjoyable despite the story being unoriginal and unsurprising. The short 90-minute run time breezes by, and the movie rarely drags.

Early Man is, essentially, Aardman doing what they do best, with a creative world, and a pleasant alternative to the overabundance of CGI offerings out there. If you are looking for an enjoyable cinematic experience the whole family can enjoy, Early Man gets the job done.

DISCLAIMER: Images in this review are the property of their respective copyright holders, including StudioCanal, British Film Institute, and Aardman Animations. For promotional purposes only. All rights reserved.

Samson - A Disappointing Take on the ...