Bulletboys – Marq Torien and Company Return With Their Latest Album!

The Bulletboys came onto the scene in the latter half of the 1980s as a spin-off of King Kobra. The group’s Ted Templeman-produced 1988 debut produced many classic hits, including MTV videos, despite the inevitable Van Halen comparisons. In the years that followed the band’s initial releases, guitarist/vocalist Marq Torien remained the group’s sole original member, while the other three “classic” members have formed a separate spin-off group called Lies, Deceit and Treachery.

From Out of the Skies is the latest album from the Bulletboys, and their first new release of original material since 2015’s Elefante. Over the years, unlike many of their peers, the Bulletboys have not been content to fit into the “retro cool” category, instead choosing to pursue a more modern direction with their music, to the delight of many fans, and to the ire of just as many others. But no one can deny the band’s perseverance. The current incarnation of the band features Torien with Nick Rozz, Chad MacDonald, and Joaquin Revuelta.

While I admit I have not loved every single thing the Bulletboys have done since their heyday, From Out of the Skies comes off as a pleasantly surprising album. Much of this release could be referred to as power pop with a modern twist, but the record is all over the place, and even takes the listener by surprise with a few unexpected musical directions. While not every single track is an instant classic, it is a step up from many of their recent releases. When this album works, it works pretty damn well. 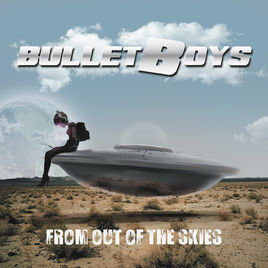 The big track that is sure to be getting all the publicity here is “D-Evil,” which features a guest appearance from Eagles of Death Metal’s Jesse Hughes. The track is surprisingly infectious; this could easily be a modern rock anthem if it got the proper radio support and exposure. If it is going to be the tune here that gets the most exposure, the band should be pleased by that.

Fortunately, the highlights on the album are numerous, even if they are wildly different and the album is not exactly the most consistent thing you will ever hear. “Apocolypto” makes for a strong opener with fantastic guitar work, and of course, Torien’s distinctive vocal. The Foo Fighters-esque title cut and “What Cha Want” are additional solid cuts that shows these guys are surprisingly good at adapting to modern sounds, staying relevant musically without clinging to their glory days.

There are a surprising number of ballads on the album, including “Hi-Fi Drive By,” featuring some of Torien’s best vocal work, and the Beatles-esque “Switchblade Butterfly.” Album closer “Once Upon a Time” is a ballad that would be home on a modern pop station with its sounds and instrumentation, once again showing just how diverse these guys can be.

My favorite track on the album is most likely “Losing End Again,” which brings to mind the acoustic/unplugged sound many artists were going for in the 90s. The only real misstep in an otherwise stellar release is “PRAB,” which gets a little TOO funky and modern in places, and even has Torien conjuring up the ghost of Michael Jackson near the end of the tune.

From Out of the Skies is an album that is all over the place in its 10-track duration, but when the album is good, it’s a damn good release. Marq Torien and company have given longtime fans their best music in years. Fans of the band’s early albums should be forewarned that this is a far different animal from the group’s glory days; the modern rock/power pop sounds on here are surprisingly effective, though. When From Out of the Skies hits stores on March 23, 2018, it will be a worthwhile purchase.