Home›Movie Reviews›Game Night - In the Game of Comedy, This Film is a Winner!

Game Night - In the Game of Comedy, This Film is a Winner!

Max and Annie love trivia nights, and after meeting at one at a bar, the two begin playing games together all the time, and are quickly married. But Max’s stress levels are pushed to their limit when his brother Brooks, who has always tried to one-up him since childhood, comes back into the picture, wanting to one-up Max once again by taking over the Friday game night he and his friends do. What starts off as a murder mystery event quickly spirals out of control when it is revealed that Max is not all he seems. It is up to Max and his friends to solve the real mystery, and prevent Brooks from being killed by criminals he has wronged in.

It’s nice to go to the movies for the first time in a long time, and see a comedy that is actually funny. Game Night is a winner with its original premise, a terrific and likable cast, and laugh-out-loud hilarious moments that never stoop to low-brow gross-out humor or cheap jokes. The movie never takes itself seriously, though whether this will be a strength or a weakness is entirely reliant on the viewer. 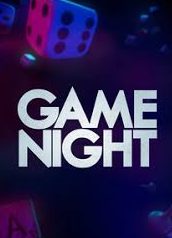 The casting and the performances often make or break a movie, but Game Night is perfectly cast. Bateman and McAdams are fantastic as the leads who live for gaming, and find themselves in over their heads due to the events of the film. Despite the movie’s over-the-top hilarity, Bateman’s struggles, including being unable to conceive a child, and dealing with stress from a brother always trying to outdo him, actually manage to feel quite relevant and relatable. Other great performances include Billy Magnussen as a dimwitted man who begins dating a more intelligent woman in a laughable effort to finally win at game night, and Jesse Plemons as a creepy, reclusive police officer that our heroes avoid by all means necessary, often to a laughable extent.

The film spirals out of control and over the top in no time flat, yet still manages to effectively develop its cast. The premise starts simple, with a murder mystery party, but when things go awry, seeing how the characters handle things becomes all the more entertaining. I won’t go into spoiler territory here, but the film actually does try to hit the audience with a few unexpected and quite entertaining plot twists.

I will also give the crew credit for the use of creative overhead camera angles which make neighborhood cul-de-sacs, houses, buildings, and vehicles look like board game elements, which is surprisingly effective and works well with the theme of the movie.

However, Game Night’s greatest strength is also its greatest weakness; namely the fact that the movie never wants to take itself seriously. A character is shot in the arm, and someone tries to remove the bullet. The man is bleeding profusely over the course of the film, yet never collapses from blood loss or seems to feel any pain, unless it is convenient to the plot (or audience humor). In another scene, a man’s doctor, during a medical consultation, comes straight out and says she wants to date the man’s brother, something that would have likely gotten her fired in real life. Whether these will be seen as weaknesses or strengths ultimately comes down to the viewer. My advice? Go with the flow and don't take things too seriously. The movie obviously doesn't!

Game Night’s “take no prisoners” approach to comedy succeeds thanks to a hilarious cast, witty script, and a brilliant premise. If you want to laugh, you have found your movie.

DISCLAIMER: Images in this review are the property of their respective copyright holders, including Warner Bros. Pictures, Davis Entertainment, Aggregate Films. and New Line Cinema. For promotional use only. All rights reserved.

Every Day - Despite Its Best Intentions, ...