Home›Movie Reviews›Death Wish - Is This Remake of the Vigilante Classic Worth Your Time?

Death Wish - Is This Remake of the Vigilante Classic Worth Your Time?

Death Wish is directed by Eli Roth, and is a remake of the 1974 Michael Winner-directed film starring Charles Bronson, which was based on Brian Garfield’s 1972 novel of the same name. the film stars Bruce Willis, Elisabeth Shue, Dean Norris, Kimberly Elise, and Vincent D’Onofrio.

Paul Kersey is a successful surgeon living in the suburbs of Chicago. He has a loving wife and daughter, but his endless shifts at the hospital interfere with family life. Following a home invasion that leaves his wife dead and his daughter in a coma, he takes a look at the crime-ridden city around him, and picks up a gun, waging a one-man war on crime in the city, and begins a hunt for the men that attacked his family. Before long, he finds himself in over his head, with his crusade putting him in mortal danger on a regular basis, and threatening to alienate him from his own brother. Meanwhile, news of the “Grim Reaper” killing thugs goes viral in the media, sparking public debate as to whether he is a hero or an outlaw, as police continue an investigation into who the mysterious vigilante is. 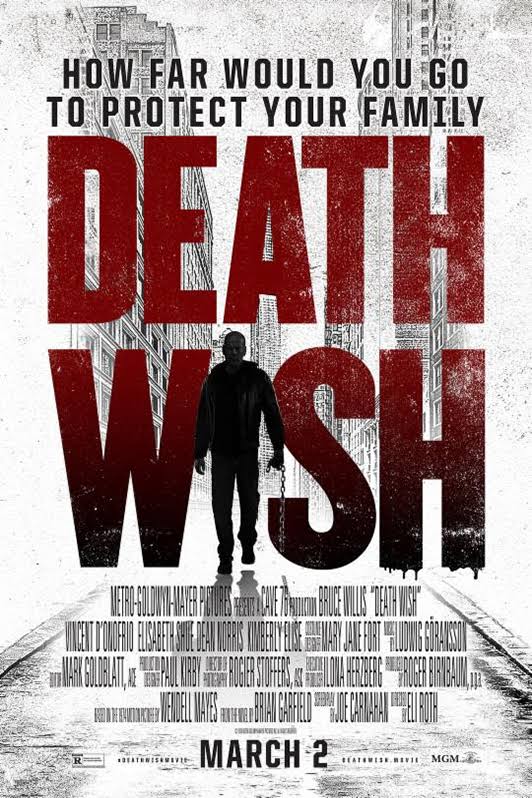 Already, this remake of Death Wish is drawing in many negative reviews from people claiming it is “insensitive” and “politically incorrect,” but it is clear many of these so-called “critics” are simply reviewing how the movie clashes with their own political beliefs. The fact that the movie has a 15% critic rating on Rotten Tomatoes versus an 80% approval rating with the audience just goes to further demonstrate this.

As I was one of the people who actually watched the movie, rather than rating it based on personal beliefs and biases, I can honestly say that this is a fairly respectable update of a classic story. Bruce Willis is fantastic as the distraught hero turned vigilante, and a strong supporting cast and decent story here manage to go a long way. The movie is a little too long and does have some flaws in its execution, but it still manages to be a breath of fresh air versus other “vigilante” movies of recent years. Oscar material this isn’t, but the film will entertain if you give it a chance.

I will be the first to admit I had my doubts about Bruce Willis as Paul Kersey (the role played by Charles Bronson in the original films), but he actually manages to juggle the working-class “everyman” persona with the vigilante transformation. When he loses his wife and finds his daughter in a hospital bed, we as an audience sympathize with him. The cityscape ridden with gangsters and other street trash will hit close to home for many people in these bleak times as well.

Contrary to what many other reviewers have said, I do not believe that this film advocates or glorifies vigilantism; our hero’s estrangement from his past life, including a solid supporting role from Vincent D’Onofrio as his brother, shines through in many scenes. Willis’ character is vulnerable, both physically and mentally, and it does show throughout the film. And, of course, much like in the original films, we can’t help but have a smile on our faces when our hero blows the trash away.

That said, this is not a perfect film. For instance, Eli Roth seemed to forget he wasn’t directing a horror film in a few scenes, including the initial scoring/direction of the attack on Paul’s family that sets the movie into motion, and a brief scene with a man’s head crushed that results in his brains literally being spattered on the floor. Fortunately, such moments of gore are fairly rare.

The other area the movie falters in is its overuse of popular music. The original Death Wish films primarily stuck to scored themes (including Herbie Hancock in the original and Jimmy Page in the second), but here we have rap tunes and AC/DC blasting to a point that they dilute and detract from the narrative. The over-the-top gun store scenes don’t exactly do the film any favors either, and the ending, which I will not spoil here, feels a little too convenient.

This new version of Death Wish is not going to score any points for originality, and it certainly isn’t award-worthy material. But for what it is, it is a satisfying cinematic experience for those that know what they are getting, and can set their personal biases aside for two hours. For a modern take on this story, the film is more than adequate, even if it doesn’t bring much new to the table. It comes recommended, but it goes without saying that this one won’t be for everyone.

DISCLAIMER: Images in this review are the property of their respective copyright holders, including MGM. For promotional use only. All rights reserved.