Red Sparrow - From Russia.... With Mediocrity.

Red Sparrow is directed by Francis Lawrence, and is based on Jason Matthews’ 2013 novel. The film stars Jennifer Lawrence, Joel Edgerton, Matthias Schoenaerts, and Jeremy Irons.

Dominika Egorova, a successful Russian ballet dancer, finds herself out of work as the result of an unexpected injury. In her desperation, she turns to her uncle, a man in Russian intelligence, but her ending up in a compromising situation leaves her with a choice – she can be killed, or become a “Sparrow,” an agent that excels in the seduction of targets, to achieve mission goals by any means necessary. Despite her personal and external conflicts, she is given an assignment in Budapest, where she encounters an American CIA agent, and finds her loyalties to Russia tested.

Red Sparrow is the long-awaited reunion of two of the persons that were instrumental in bringing The Hunger Games series to life on film; star Jennifer Lawrence, and director Francis Lawrence (the two Lawrences are not related). The premise behind Red Sparrow is an intriguing one, but the film is ultimately undone by a run time that is about 30 minutes too long, an overabundance of unnecessary secondary/tertiary characters and subplots, poor character development, milking the R rating for the sake of unnecessary erotica that does nothing to help the plot, and a lack of chemistry in its leads. The saving grace, not surprisingly, is Jennifer Lawrence’s performance. 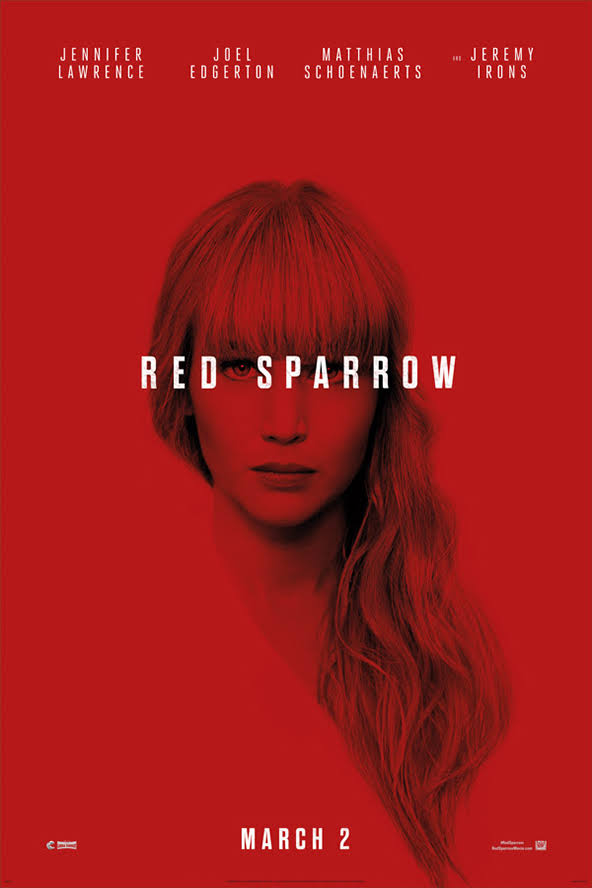 Before moving on to the factors that ultimately destroy this film, let’s take a look at what it does well. Jennifer Lawrence has been rising in popularity in Hollywood in recent years in a number of roles, with her acting in The Hunger Games and the X-Men film franchises being amongst the major ones known to a general audience. In Red Sparrow, Ms. Lawrence takes on one of her most ambitious roles to date. It is impressive to see her handling this part with finesse, and not having it devolve into self-parody. She is beautiful, deadly, and conflicted in this part, bringing something to it that another actress likely would not have been able to pull off. She’s the saving grace in this film.

Unfortunately, as much as I wanted to love Red Sparrow, almost nothing else about the film works. While Lawrence is an impressive actress, the rest of the cast, despite a few highlights here and there, just never quite hits the mark. Joel Edgerton is a terrific actor, but sadly lacks chemistry with Lawrence, and the two never really forge the bond that would have been necessary for this on-screen relationship to work. The biggest disappointment in the cast is the usually impressive Jeremy Irons, who doesn’t even try to do a Russian accent, and is barely in the film at all. This means, when he does become integral to the plot later on, he has not been properly fleshed out, and it ends up working against the experience.

Did I mention the movie is almost two-and-a-half hours long, and has a bunch of unnecessary subplots and characters? There is enough going on in this film to make someone’s head spin, and it quickly becomes difficult to know which characters are who, and what the factions in the movie are trying to accomplish. Early in the film, the cuts between Russia and the American agents are handled sloppily, which does not do the film any favors. If this movie had cut about half its characters and subplots, and been about half an hour shorter, it could have been something truly special. As is, it’s overlong, overplotted, and commits one of the worst sins any political thriller can – it’s downright boring at times. The early scenes with Lawrence at "Sparrow School" hint at something better, but nothing ever hits the mark.

Red Sparrow ultimately falls flat despite its best intentions, though Jennifer Lawrence’s performance manages to stand as the film’s true highlight. As is, this movie will make for decent rental material upon its home release, and not much more.

DISCLAIMER: All images in this review are the property of their respective copyright holders, including 20th Century Fox, TSG Entertainment, and Chernin Entertainment. For promotional use only. All rights reserved.

Concert For George: A Look Back at ...