Home›Movie Reviews›Concert For George: A Look Back at This Impressive Live George Harrison Tribute!

Concert For George: A Look Back at This Impressive Live George Harrison Tribute!

Concert for George is directed by David Leland. The show was filmed on November 29, 2002, with the film being released in October 2003.

George Harrison, legendary for his role in The Beatles, The Traveling Wilburys, and his solo career, passed away on November 29. 2001, at the age of 58, after a battle with cancer. A year after his death, many of those closest to him got together to pay tribute at the Royal Albert Hall, with an impressive tribute concert that saw all proceeds going to Harrison’s Material World Charitable Foundation.

Guests/participants at the concert include Eric Clapton, Albert Lee, Joe Brown, Jim Capaldi, Ravi Shankar, members of Monty Python, Tom Hanks, Jeff Lynne, Tom Petty, Dhani Harrison (George’s son), Billy Preston. Paul McCartney, Klaus Voorman, and Ringo Starr. The film features the all-star band of musicians playing many songs in tribute to Harrison, most of which were originally written/performed by him over the course of his career, along with a number of interview clips interspaced throughout the presentation.

George Harrison’s death was a tragic loss for the music world; the so-called “Quiet Beatle” had proven himself to be anything but over the years, creating some iconic rock-pop anthems for the ages. Despite a few quibbles with the setlist and the interview content, Concert for George stands as a strong tribute to one of the rock/pop world’s most iconic musicians. Revisiting the concert a decade and a half after its initial release is all the more impactful, especially considering many of the musicians on stage (Tom Petty, Ravi Shankar, Billy Preston) have since left us. 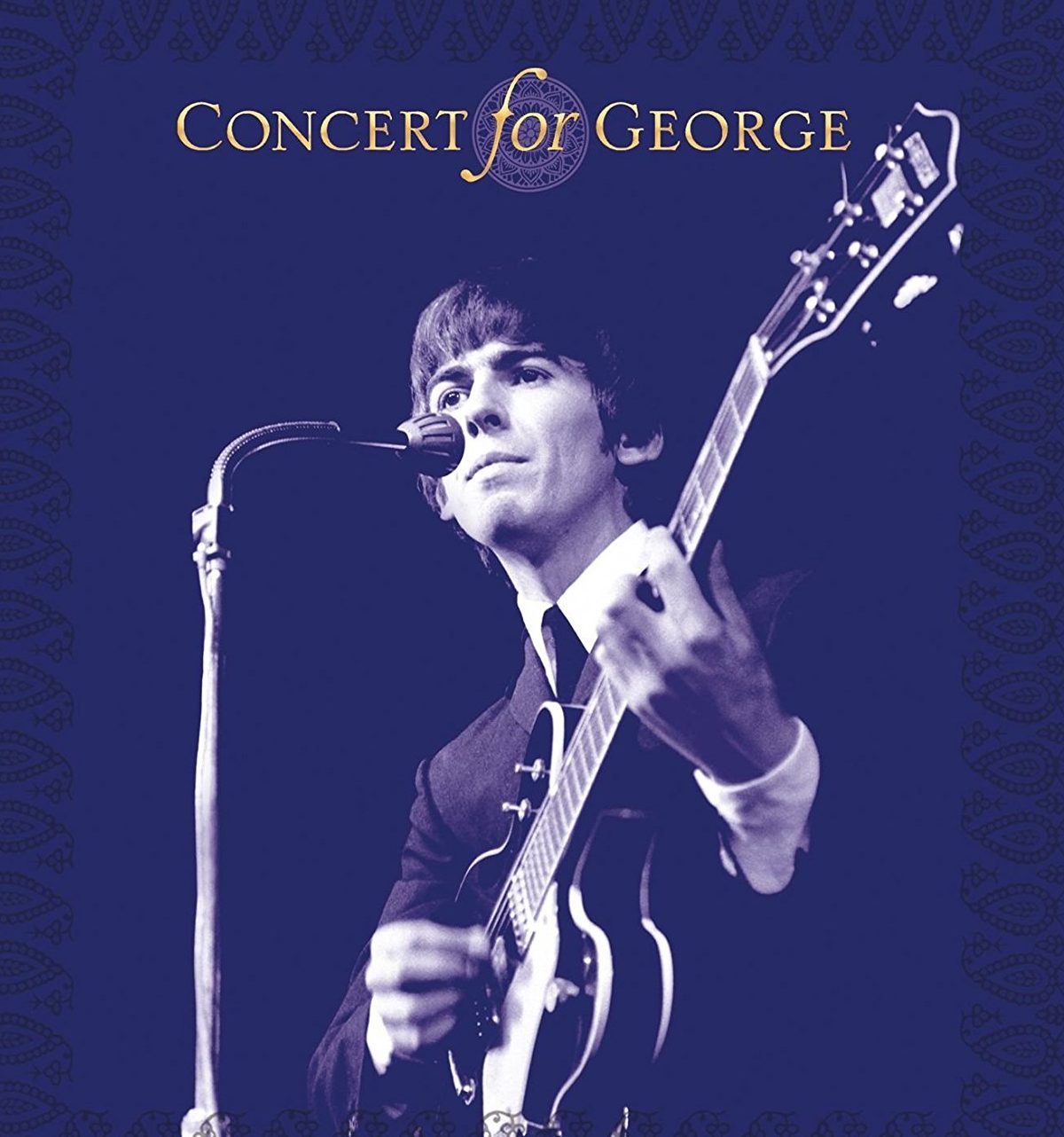 The performances throughout the evening are spirited, and more than do justice to Harrison’s legacy. Seeing this all-star ensemble put their spin on these classic tunes makes for an entertaining evening. The music ranges from the rock/pop classics of George Harrison’s career, to his Monty Python buddies performing some of their best comedic tunes, and amusing the audience with their own signature sense of humor. We even get Harrison’s longtime friend Ravi Shankar conducting an Indian ensemble, performing a new piece written just for the evening.

Okay, as fantastic as the concert is, there are a few minor points of contention:

First and foremost, the concert completely ignores anything Harrison recorded as a solo artist post-1973. This means cuts like “Crackerbox Palace,” “Love Comes to Everyone,” “Blow Away,” “All Those Years Ago,” “Dream Away,” “Got My Mind Set on You,” “When We Was Fab,” and “Devil’s Radio” are disappointingly neglected.

Secondly, the interview clips could have been handled better, and revealed more. While it is nice to get some insight into the lives of those who knew George best, most of these interview clips are fairly generic and do not reveal much of interest outside of the generic “he was great” and “I miss him” stuff. A few of these moments are effective, but for the most part, it’s nothing the fans won’t already know or be able to deduce themselves. Another disappointment here is that the interview clips sometimes disrupt songs being performed, which kills the momentum of the show in places.

The last issue that needs to be mentioned here is that, at no point in this film whatsoever, are there subtitles/captions to introduce the performers. The presentation seems to have the impression that everyone that comes in to watch is a George Harrison genius, and already knows who all these people are, and their relationships with Harrison. Even being a die-hard fan myself, I had a tough time keeping up with who was who in many cases. Many performers are introduced verbally when they take the stage, but just adding a few of these subtitles/captions throughout would have made a world of difference, particularly for those that are more of casual fans.

The Concert for George is a heartfelt, powerful tribute to a rock and roll icon, with impressive performances throughout. From more emotional moments to comedic ones, and with music that will stand the test of time, no classic rock/pop fan will want to pass this one by. A highly recommended concert film.

DISCLAIMER: Images seen in this review are the property of their respective copyright holders, including Warner Bros./Warner Home Video. For promotional purposes only. All rights reserved.

Red Sparrow - From Russia.... With Mediocrity.

Night of the Living Dead - Criterion ...